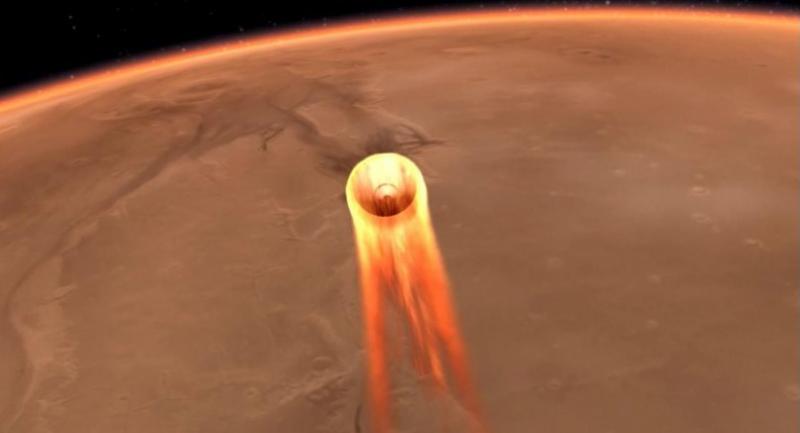 Before Mars landing, a nail-biting 'six and a half minutes of terror'

A spacecraft that cost nearly a billion dollars is on course to make a perilous landing Monday on Mars, if it can survive a high-speed approach and the scorching heat of entering the Red Planet's atmosphere, a process NASA has nicknamed "six and a half minutes of terror."

"There is very little room for things to go wrong," said Rob Grover, head of the entry, descent and landing team at NASA's Jet Propulsion Laboratory in Pasadena, California.

If successful, the entry, descent and landing of the Mars InSight -- designed to be the first mission to listen to the interior of another planet and reveal how rocky planets formed -- will add another success to NASA's record when it comes to sending spacecraft to Mars.

So far the United States is the only nation to have made it there, and only NASA's unmanned Curiosity robotic rover is still tooling around on the surface.

But if it fails, it certainly won't be the first.

Of 43 other international attempts to send orbiters, probes, landers or rovers to Mars, 25 have not made it. Either they crashed into the surface, missed their planned orbit, or disappeared after launch.

There will not be any live video streaming of Mars Insight's approach on Monday, and signals will be transmitted back to Earth on an eight-minute delay.

Nor can mission managers intervene if anything goes awry. The entire landing sequence is all pre-programmed into the on-board flight computer.

Here's what to expect:

- At 11:40 am Pacific time (1940 GMT), the spacecraft separates from the cruise stage that carried it to Mars. A minute later, the spacecraft makes a turn to orient itself for atmospheric entry.

- Two minutes later, friction with the atmosphere raises the heat shield temperature to its peak of 2,700 Fahrenheit (1,500 Celsius). This intense heat could cause temporary dropouts in radio signals.

- At 1951 GMT, the parachutes deploy. Fifteen seconds later, the heat shield separates from the spacecraft. Ten seconds on, the lander's three legs deploy to get ready for touchdown.

- At 1952 GMT, a radar activates to sense the distance to the ground.

- At 1953 GMT, the first radar signal is expected, followed 20 second later by the spacecraft's separation from the back shell and parachute. Then, the descent engines, known as retrorockets, begin to fire. InSight's speed slows drastically, from 17 mph to a constant five mph (27 kph to eight kph) for its soft landing.

- The first "beep" from the spacecraft's X-band radio -- indicating whether InSight survived the landing -- is scheduled for 2001 GMT.

- The first image from the surface of Mars is expected at 2004 GMT. However, it's possible this image may not arrive until Tuesday.

- The orbital pattern of the Mars Odyssey spacecraft, flying overhead, means NASA won't know until 0135 GMT on Tuesday if InSight's solar arrays have deployed or not. This step is crucial because the quake-sensor is powered by the Sun for its one-year mission.