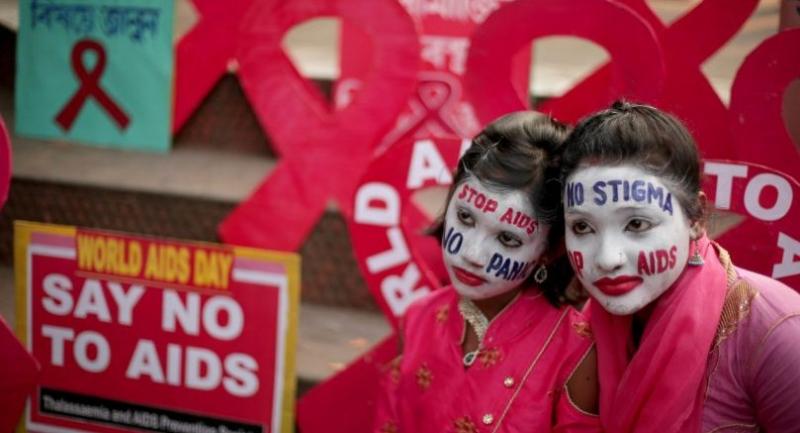 THAILAND WORKS TOWARDS BANISHING THE VIRUS BY 2030, THOUGH POLICY TWEAKS NEEDED

THAILAND HAS made significant progress towards its ambitious goal of ending Aids by 2030 – something UNAids hopes to accomplish but for which few countries are on a good track.
Despite some 440,000 people still living with HIV in Thailand as World Aids Day 2018 arrives on December 1, the nation can take a bow for having built a solid foundation on which to continue building towards the dream of an HIV-free society.
An estimated 98 per cent of people living with HIV in Thailand know their status. And 75 per cent of them have access to retroviral drugs, which have proven so effective that when a regular dose is taken, someone with HIV can live a normal, healthy and happy life for decades.
Thailand’s success at diagnosing and treating is among the world’s best. UNAids has estimated that just 75 per cent of people living with HIV in the world know their status. And just 59 per cent of them have access to anti-retroviral drugs.
“Knowing your status is the first step to treatment and the end of Aids,” the Kingdom’s Disease Control Department (DCD) director-general Suwannachai Wattanayingcharoenchai said.
DCD campaigns, therefore, have taken the theme of “Know Your Status”.
The Thai Red Cross Aids Research Centre (TRCARC), meanwhile, has waged its campaign under the “Undetectable = Untransmittable” to communicate to the public that treatments can push down the presence of the HIV virus to an undetectable level that renders it untransmittable – and therefore makes treatment a form of preventing transmission.

“Studies show that unprotected sex between a person with undetectable levels of HIV and his/her partner who is HIV-free does not cause any transmission,” the centre’s director Dr Praphan Phanuphak said.
He, therefore, emphasised that the key to ending HIV was to ensure people living with HIV regularly take antiretroviral drugs to stay healthy and to not spread the virus.

“We have chosen the U=U or Undetectable Equates Untransmittable theme for our campaign so as to reduce the stigmatisation of people living with HIV. Without a stigma, those at risk will have the courage to come forward to get tests and treatments that will not only save their lives but also allow them to have a good quality of life,” Praphan said.
In Thailand, HIV tests, anti-retroviral therapy, and related treatments are free. Campaigns to raise public awareness of HIV prevention have been solid.
Several government agencies and non-governmental organisations have also been very active in fighting against Aids/HIV.
There are shelters for the HIV-positive who previously had nowhere to go. There are foundations that will connect the HIV-positive to necessary medication, schooling and jobs.
Receiving support from the Global Fund to Fight Aids, Tuberculosis and Malaria, Thailand has become the first Asian country to bring the mother-to-child transmission rate to below 2 per cent.

Earlier this year, the World Health Organisation (WHO) certified Efavirenz Tablets (600mg) manufactured by Thailand’s Government Pharmaceutical Organisation (GPO). The certification makes Thailand the first Asean nation to have been certified in the WHO Pre-qualification Programme for HIV/Aids treatments.
“This reflects the world’s trust in our drug’s efficiency,” GPO chairman Dr Sopon Mekton said. Efavirenz is a key drug in a cocktail of anti-HIV medications that have proved highly effective.
GPO deputy managing director Mukdavan Prakobvaitayakit said this success had saved the country’s budget.
“It costs us just Bt180 to produce each box of Efavirenz. If we import the equivalent, we will have to pay more than Bt1,000 per box,” she said.
The National Health Security Office’s (NHSO) secretary-general, Dr Sakchai Kanjanawatana, said the government had allocated Bt3 billion for HIV/Aids patients in the 2019 fiscal year.
Of that, Bt2.8 billion is for the provision of anti-retroviral therapy and related services. Some Bt200 million is for HIV prevention. About Bt38 million is for the promotion of services for people living with HIV/Aids.
Aids Access Foundation’s director Nimit Tien-udom has acknowledged Thailand’s many achievements in the battle against HIV/Aids. Yet, he has noticed some obstacles that could prevent the country from eradicating Aids/HIV by 2030.
“In fact, if an HIV-positive woman seeks prenatal care within the first 15 weeks, there is no risk of mother-to-child transmission,” Nimit said. “But we can’t ignore the fact that hundreds of thousands of women and girls get unwanted pregnancies. And most of them are reluctant to seek prenatal services.”
The Aids activist, moreover, expressed concerns that the Public Health Ministry’s drug procurement plan has required patients to pick up anti-retroviral medicines in smaller lots.
“When NHSO was in charge, people living with HIV could take the medicines once every three months. But now, they have had to pick up the medicines almost on a monthly basis. It’s not easy for them to take leave from work this frequently,” Nimit pointed out.
He also recommended that campaigns be created to help educate people from thinking that those living with Aids/HIV would appear to be really ill and with ugly wounds.
“Those who have been on anti-retroviral therapy are perfectly healthy. We need to send this message across the society,” he said.
Moreover, Nimit suggested that free blood tests should cover more groups of people, not just those deemed to be at higher risk, as some people might have become infected despite not having risky behaviours.
He also said the distribution of free condoms should receive a strong emphasis because it could prevent the spread of many sexually transmitted diseases, not just HIV.
“Don’t let anyone steal the condom-procurement budget,” he said, as he suspected that some condoms had gone missing.
Thanutkan Thanutamornthanasiri, Aids Network coordinator based in the Northeast, said she had seen the immense improvement on Thailand’s Aids/HIV front lines during the past two decades.
“I must say that had the system been this good 20 years ago, my first two children would still be alive today,” the 49-year-old woman said.
Despite living with HIV for decades, she is now the mother of an HIV-free son. The virus has not been passed on to her third child due to the availability of free and effective medication.