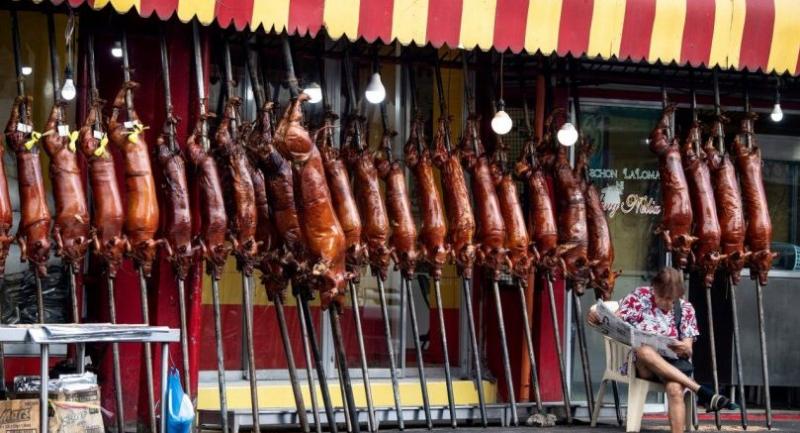 Smoke rises day and night from their cooking pits in the La Loma area, which brands itself a hub for producing one of the nation's favourite foods: "lechon", or roast suckling pig.

Crews shovel mounds of charcoal into neat rows under the pigs as they cook, gradually darkening into a crispy, caramel-colour.

"In December the demand for pork spikes, starting on the 15th up to the 31st," said 44-year-old Arturo Ayapana, who has been a lechonero for 15 years. "We start (cooking) at dawn."

Pork is one of the majority-Catholic country's year-round staples, a taste introduced during 400 years as a Spanish colony -- but consumption goes into overdrive for the holidays.

In La Loma, the roads and sidewalks are darkened and slippery in spots from the grease dripping from cooked pigs, which are hauled between roasting pits and sales stalls on hand carts.

Squealing, still muddy pigs arrive by the truck load, before being slaughtered and skewered on bamboo poles for cooking. They get a final dunking in seasoning before the roasting begins.

Over the next several hours they are slowly spun over the blazing coals by a mechanical crank system that is still turned by hand in many of the pits.

A whole roast pig, which weighs at least 15 kilograms (33 pounds), sells for about $150. That is a small fortune for many in the Philippines, where nearly a quarter of the country lives on less than $2 a day.

"We cannot afford to buy and eat lechon," Ayapana, the lechonero. "We have to content ourselves with small bites."

Yet many Filipinos splash out during the holidays, with buyers perusing the pigs displayed on their spits in the rows of lechon stalls in La Loma.

"When you tap it it needs to sound crunchy, like this one," said farm owner Isiah Elbore as he shopped.

"When it arrives home the skin is the first part to be eaten. It's a tradition for us (to eat lechon)," he added