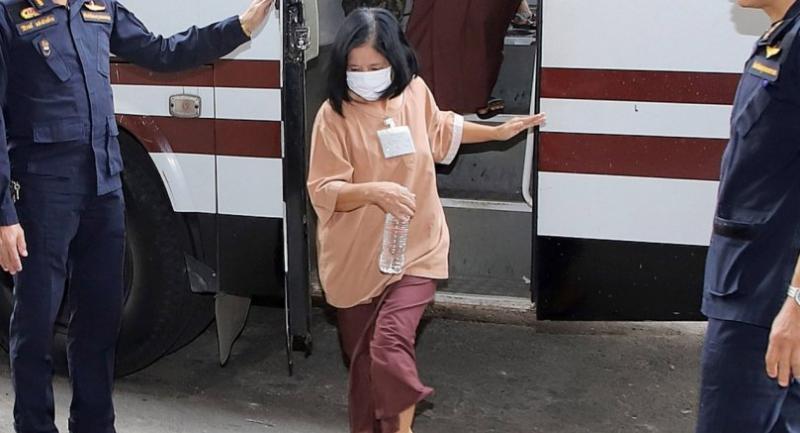 Woman breaks down after being cleared of human trafficking

THE COURT of Appeals on Tuesday acquitted alleged con woman Monta “Ying Kai” Yokratanakan from the human trafficking lawsuit in which she was accused of employing three young women to work as her servants without pay or days off from 2006-2010.

The primary court had sentenced her to three years in prison and ordered her to pay Bt590,000 in compensation.

The 61-year-old Monta, who was taken to court from Central Women’s Correctional Institute where she had been since her arrest in 2016, broke into tears upon hearing the acquittal and prostrated herself in front of the court in gratitude.
She still has to serve a total of “14 years and 12 months” behind bars over two separate lese majeste offences, each carrying a jail term of seven years and six months, as per the court verdicts on June 6, 2017 and January 29, 2018. Those charges arose after she claimed on multiple occasions to be a royally appointed khunying.
Regarding the human-trafficking charge, the Court of Appeals considered the primary court’s verdict on October 19, 2017 over Monta’s alleged offences committed against Mae Hong Son teen Kanchana Ponglarpsunthorn. She had been accused of seizing the-then 16-year-old’s national ID card, failing to pay her a Bt6,000 monthly salary and reneging on her promise to fund a scholarship for her to study at a nursing college.
Complaints filed by two other former maids – Dalin Lakham, then 19, and Kwanjira Jirasakulchokchai, then 17 – had already been dismissed by the primary court due to insufficient evidence.
The primary court ruled that Monta had seized Kanchana’s ID card in order to treat her as forced labour, in violation of the Anti-Human Trafficking Act 2008.
The Court of Appeals, however, didn’t think that Monta’s treatment of the teenager fell within the bounds of human trafficking. Kanchana and the two other maids lived in Monta’s condominium and split among themselves the house chores and the care of Monta and her child. Therefore, it said, Kanchana had not been subjected to hard labour.
Kanchana also admitted that Monta had from time to time given her Bt1,000 spending money, a cell phone and Bt2,000 to fund trips to her hometown. She had also allowed her to run some personal errands for her and occasionally taken her along on her own provincial trips. These all showed that she had some freedom, was not detained and was not subjected to harm, the Court of Appeals said.
Therefore, having decided that Monta’s actions did not constitute a human-trafficking offence as per the Anti-Human Trafficking Act 2008, the Court acquitted her and said she didn’t need to pay the previously ordered compensation to Kanchana.
Another, similar human-trafficking lawsuit, in which Monta was accused of luring a 16-year-old Mae Hong Son girl to work as her maid in May 2008-November 2010, also resulted in the primary court acquitting Monta, on December 1, 2017.