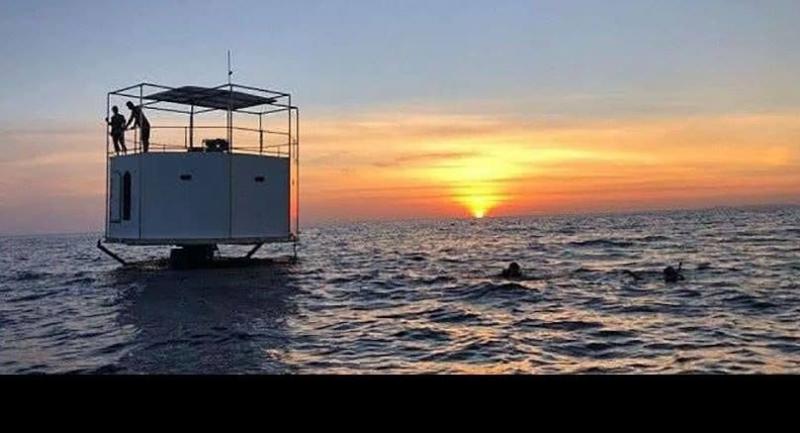 Navy to seize seastead as evidence in criminal case

The Third Naval Area Command is on Saturday scheduled to remove the floating seastead structure off Phuket seashore belonging to an American bitcoin investor.

Thai authorities plan to seize it as evidence in a criminal case. They also fear the structure will block a shipping lane.
US national Chad Elwartowski and his Thai girlfriend, Supranee Thepdet (aka Nadia Summergirl), are facing charges of threatening the Kingdom’s sovereignty. On Sunday, the Royal Thai Navy and Phuket Maritime personnel boarded the structure and said it violated Article 119 of the Criminal Code and also posed a navigational hazard.
The couple launched their seastead on February 2 off the coast of Phuket along with the company, Ocean Builders.
The floating structure is located to the southeast of Koh Racha Yai, approximately 12 nautical miles from the mainland.
Elwartowski has claimed that his seastead is outside Thailand’s territorial waters, but Thai authorities insist that it violates Article 119 and challenges Thailand’s territorial rights.
According to law firm Siam Legal international, “Section 119: Intent to cause injury to the nation” states that, “Whoever does any act with intent to cause the country or any part thereof to descend under the sovereignty of any foreign state, or to deteriorate the independence of the state, shall be punished with death or imprisonment for life.”
The couple’s seastead home is located in Thailand’s exclusive economic zone or 200 nautical miles off the mainland, which comes under the Royal Thai Navy, said Rear Admiral Krissana Kundeeya, the Third Naval Area’s chief of staff.
“The Royal Thai Navy has full authority and duty to protect national interest and marine sovereignty [in the area],” said Krissana.
Regarding the couple’s claim that they feared for their lives, Vice Admiral Sitthiporn Maskasem, commander of the Third Naval Area, said that authorities had followed the legal procedures.
“We are neither hunting them down nor threatening them,” said the commander.
Sitthiporn said that such a waterborne homestead was deemed a new kind of threat to national security so his command needed to closely monitor such activities and prevent such structures from being installed in the future.