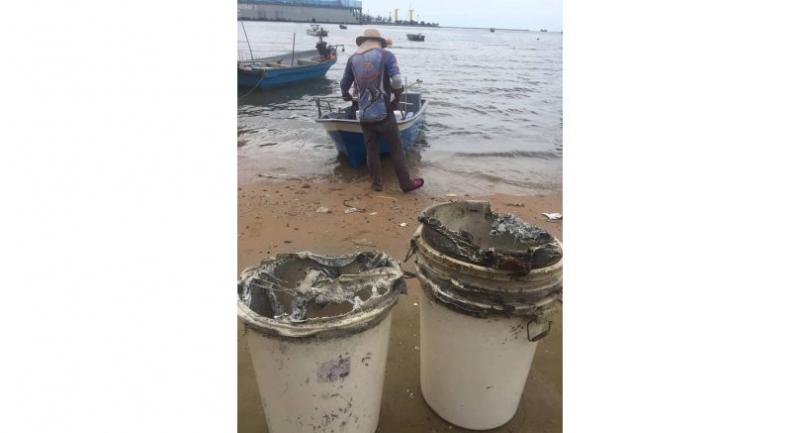 LOCAL FISHERMEN plan to sue the owners of toxic chemical cargo, if proof emerges of a chemical spill in the sea following the fire at Laem Chabang Seaport in Chon Buri province on Saturday.
Environmental experts, meanwhile, suspect that there may be more undeclared chemicals in the cargo.
Rangsan Prai-ta-le, a local fisherman from Ban Laem Chabang in Chon Buri, said yesterday that though it is yet to be proved if there had been a chemical leak from the fire onboard South Korean ship, KMTC Hongkong, local fishermen said marine animals have been moved from the vicinity.
“After the fire on Saturday, we did not receive any information about the possible impact on people living around the seaport,” Rangsan said.
“We were lucky that the wind blew in another direction on that day, so our community was saved from the toxic chemical smoke and ash, or else many people in our village would have been badly injured, considering our proximity to the seaport.”
However, his village has already suffered from the sharp drop in seafood catch soon after the incident and their customers have stopped buying fish from them, as they are concerned about chemical contamination.
Rangsan said local fishermen have suffered serious damage due to the irresponsibility of the owners of the toxic chemical, and hence, were planning to file a lawsuit against those behind this disaster.
“We have been coordinating with environmental researchers from Burapha University to retrieve seawater samples for examination. If it is found that the seawater was indeed contaminated, then we will sue the owners of the toxic chemical cargo,” he said.
“We also want to have the Thailand Port Authority step up measures to prevent similar incidents from recurring, as this is not the first time that such an incident has happened at Laem Chabang Seaport and had an adverse impact on the environment and health of local people.”
Pollution Control Department (PCD) director-general Pralong Damrongthai revealed that the department was working with the Eastern Gulf of Thailand Marine and Coastal Resources Research and Development Centre to examine seawater samples from two sampling areas at Laem Chabang Seaport.

Nothing suspicious found
Pralong said preliminary results indicated that nothing suspicious was found in the water samples from both areas, but they still have to wait for another day to get results for a test on heavy metals, as it is suspected that there were still undeclared farm chemicals smuggled with some shipments.
Meanwhile, Somnuck Jongmeewasin, a leading environmental expert with EEC Watch, speculated that there must be more undeclared chemicals in the burning cargo that the authorities and the shipment owners had not publicised, as pH tests from the ashes revealed the chemical fallout was strongly alkaline.
“From what the Thailand Port Authority has disclosed, the chemicals inside these cargo were calcium hypochlorite and chlorinated paraffin wax, which are very acidic when they react with water, but pH test on the ashes showed it was strongly alkaline,” Somnuck said.
“Therefore, there is a strong indication of more toxic chemicals being present inside the cargo, which the shipment owners and the authorities have still not disclosed to the public.”
He emphasised that withholding such important information could harm people in the area.