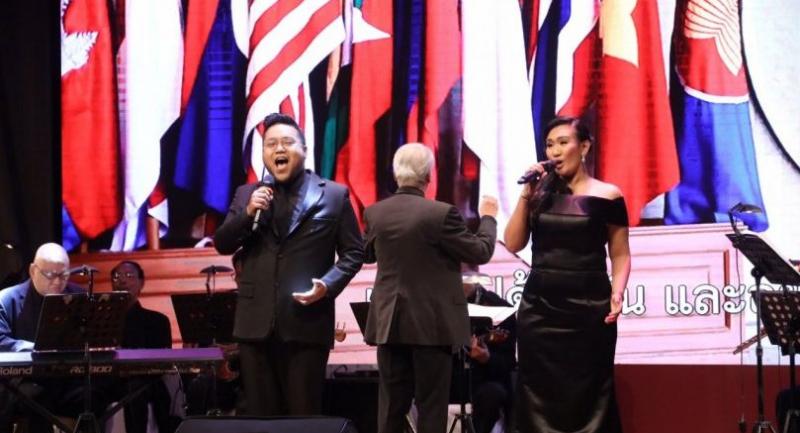 Thailand is hosting the 34th Asean Summit this weekend in Bangkok, but it’s not going to be wall-to-wall policy talk.
The Association of Southeast Asian Nations wants to world to see it operating in good cheer as well as cohesion, and the most colourful way to do that is to weave a tapestry from the threads of the region’s diverse cultures.
This is, after all, Asean Cultural Year, and the hundreds of delegates arriving for the summit have brought along samples of their countries’ folk music, theatre, visual art and cuisine.
The motto that the artists will sing in chorus at Saturday night’s gala dinner at the Shangri-La Hotel is “Asean we join, Asean we share, Asean will go far, Asean will endure.”
Thai Culture Minister Vira Rojpojanarat said on Wednesday a formal “Leaders’ Statement on Asean Cultural Year 2019” had been drafted for adoption during the summit.
The aim is for all heads of government to encourage their people to share their culture, respect differences among them and improve human welfare.
Activities this weekend will adhere to the concepts of variety, creativity and sustainability with an eye to promoting Southeast Asian culture and sustainable cultural tourism overseas, Vira said.
Headlining the entertainment on Saturday night will be the band C Asean Consonant, each of whose 10 members hails from a different country and plays a traditional instrument of their homeland. The band will present new songs specially written for the occasion.
The ministry invited composers Virat U-thavorn and Prapas Cholsaranon, both National Artists, to conceive two songs to match the year’s cultural theme, “Asean Oneness to the World” and the goal of “Advancing Partnership for Sustainability”.
The results of their efforts are bilingual and suitably rousing. “Advancing Together as One” is about harmony, “Asean Will Go Far” about empowerment.
Prime Minister Prayut Chan-o-cha has said the regional bloc intends to “strengthen our cooperation under the ‘3M’ strategy – mutual trust, mutual respect and mutual benefit – to achieve this year’s goal”.

Starting with the idea of Asean cultural diversity, Prapas composed “Asean Will Go Far” in Thai, his lyrics and melody seeking to strengthen cultural cooperation across borders. Singer Kittinan Chinsamran, one of the popular performers from television’s “The Voice”, translated the words into English and recorded the song in both languages.
“We share similar ways of living, beautiful nature and rich cultures, right down to the friendly greeting of the wai,” Prapas told The Nation Weekend.
Among the lyrics:
“Our cultures and traditions are there to be exchanged. We can break down any wall of differences and build on our similarities. In harmony and unity, 10 fingers mean two helping hands.”
Prapas wanted the tune to sound modern and arranged the chorus for a group of singers – the “Asean we join, Asean we share” refrain, which is repeated in their own languages.
With Thailand chairing Asean this year, Virat has applied a distinctively Thai melody in “Advancing Together as One”, chiefly by use of the Thai flute and dulcimer. Chairat Wongkiat wrote the Thai lyrics, while Chakkrit Sriwalee, Thailand’s ambassador to Hungary, conceived the English words, a message of “good cooperation among the members for achieving sustainable development”.
“Let’s advance as one,” go the lyrics. “Build on the work we’ve done. Hand in hand, you and me. T’wards sustainability.”
The music videos accompanying both songs illustrate cultural similarities such as khon masked dance, Buddhism and rice farming, along with differences – the prevalence of Islam in three member-states and the broad diversity in landscapes.
“I believe in the power of music,” Virat told The Nation Weekend.
“Music is a universal language, so I hope my song can build on our mutual understanding and inspire everyone to join hands to move our region forward.”
So, is Asean about to have a hit single at the top of the charts? A little early criticism has already been heard.
Isara Choosri, a scholar in linguistics at Mahidol University’s Institute for Languages and Cultures of Asia, found the music videos lacking balance in their depiction of the region’s cultures, instead focusing too much on Thailand’s.
“Asean has a wealth of diverse cultures, but the music videos fail to address this adequately,” he said. “We don’t see the ethnic minorities of Indonesia or the Philippines in the videos.”
Isara felt the Thai instruments’ dominating “Advancing Together as One” would have been more representative of the whole region with the inclusion of drums, gongs and xylophones typical to every nation with minor variations. “So again, we’re missing the idea of harmony.”
Isara and Prapas agree that music can only inspire to a certain degree. Achieving Asean’s goals will require the cooperation and determined actions of every member-nation, they said.