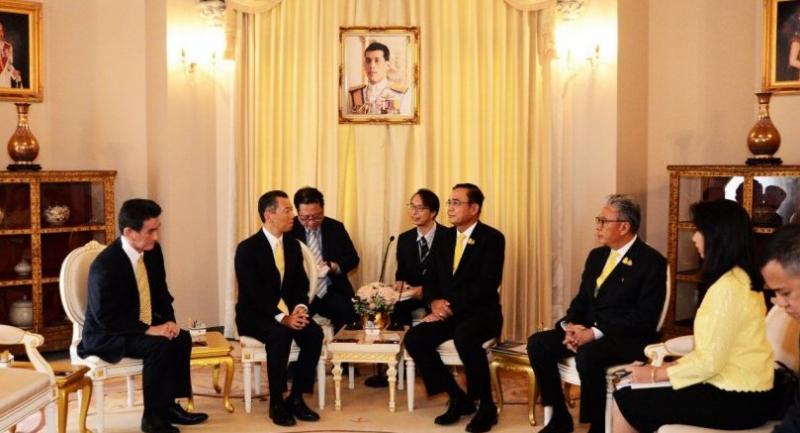 Prime Minister Prayut Chan-o-cha on Wednesday asked the Japanese External Trade Organisation (JETRO) for added investment in the aviation, medical and digital economy sectors during a meeting with the outgoing president of the organisation and his successor.

The premier discussed cooperation with Hiroki Mitsumata, the current president of JETRO Bangkok and his successor Atsushi Taketani during a meeting at Government House.
Taketani emphasised that JETRO would continue to cooperate with Thailand and was willing to encourage the Japan private sector to invest in the kingdom.

Japan and Thailand have set a goal for 2019 to cooperate on the development of airports, medical instruments, robots and in the digital economy, he said. Prayut also urged the organisation to encourage Japanese educational and research and development institutes to further invest in the Eastern Economic Corridor (EEC).
“ECC development will drive the overall regional economy. We already have the cooperation of China and Japan in investing and developing a high-speed rail network linking the three airports in Thailand. That cooperation can be expanded to include other counties and strengthen the region. We hope to receive more JETRO support in the future,” Prayut said.
Mitsumata thanked the Prime Minister, saying that throughout his tenure as president of JETRO, he had always been warmly welcomed and supported by the Thai government. Thailand, he added, is an important friend to Japan and the countries have enjoyed a good relationship for a long time.
“The Thailand 4.0 National strategy and EEC development project will help to construct a strong Thai economy for the future. The public sector has played a significant role in helping JETRO to work effectively,” he said.
Prayut said he would attend the G20 summit at this weekend in Osaka, Japan, as chairman of Asean summit. He would also hold bilateral discussions with Japan’s Prime Minister Shinzo Abe on the cooperation issue.
JETRO is a government-related organisation that was established to stimulate mutual trade and investment between Japan and other countries around the world.