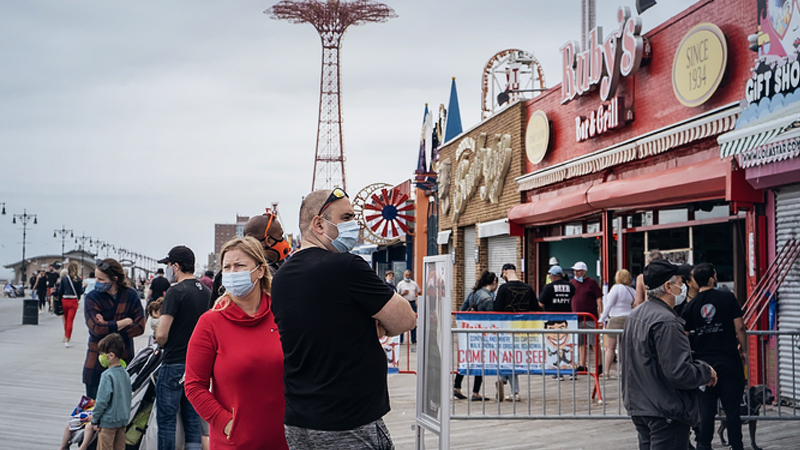 New deaths in New York from covid-19 dropped below 100 for the first time since just after the state went under lockdown, Gov. Andrew Cuomo said on Saturday, calling it "a sign that we are making real progress."

The state had 84 new fatalities.

"What we're doing is working," Cuomo said, almost three months after the state's first coronavirus case was diagnosed on March 1.

At the start of Memorial Day weekend, the governor spoke largely of progress. Friday night he issued an unexpected order allowing groups of up to 10 people to gather anywhere in the state, as long as they maintained social distancing guidelines.

Cuomo said that Long Island, hard hit by the virus, could begin reopening as early as next week, as could the seven-county mid-Hudson region. He gave no projection for New York City, which is the final area of the state without an indicated opening date. The city remains under official lockdown until at least May 28.

The state's daily death toll had been stuck in the 100s for 12 days, and the drop below 100 was first time since March 24. Cuomo announced New York would go "on pause" on March 20, effectively shutting down the entire state.

"Eighty-four is still a tragedy, no doubt, but the fact that it's down as low as it is really is overall good news," Cuomo told reporters in Albany.

The peak of the crisis hit at 799 deaths in one day in mid-April. The official death count was 23,195 on Friday.

New York reported 1,772 new virus cases on Saturday, for a state total of 359,926. Cuomo said that total and new hospitalizations continued to drop, as did admissions to intensive care.

Cuomo didn't explain in detail his decision to allow gatherings of up to 10 people anywhere in the state, New York City included. He said he wasn't aware of a lawsuit filed Friday by the American Civil Liberties Union objecting to the governor's earlier order that allowed gatherings up to that size only for religious services and Memorial Day commemorations.

Rain probably deterred many from traveling to Long Island or New Jersey on Saturday, an influx that local officials have feared. Sunday's weather forecast looks less wet, and temperatures will warm somewhat by Monday.