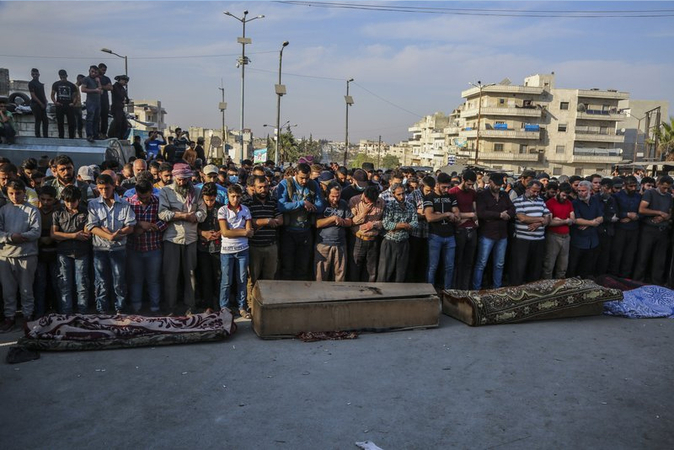 BEIRUT - Airstrikes on a training camp for Turkish-backed rebels in northwestern Syria killed or injured dozens of fighters Monday, according to a rebel spokesman, who estimated that more than 170 people died or were wounded.

The strikes killed 35 fighters from the Sham Legion, a rebel group that falls under the Turkish-backed National Front for Liberation, an umbrella organization for rebels in northwestern Syria, a member of the group said. Another 77 were wounded.

The attack was one of the most serious breaches of a cease-fire struck between Turkey and Russia in March, said Maj. Yousef Hamoud, a spokesman for the rebel Turkish-backed National Army, which is part of the National Front for Liberation. Hamoud said the attack was carried out by a Russian aircraft that took off from Russia's large Hmeimim air base in Latakia province in northwestern Syria. The Russian state-owned Sputnik news agency, however, said the raid was conducted by Syrian warplanes.

The airstrike came amid an escalating air campaign in northwestern Syria over the past week by both Syrian and Russian warplanes. On Friday, online videos circulated showing the bombardment of fuel tankers in the Syrian town of Jarabulus, killing seven civilians, according to the Syrian Observatory for Human Rights, a Britain-based war monitoring group. A few days earlier, a Turkish army withdrawal from Morek, a military post in northwestern Syria, was immediately followed by Russian airstrikes, Reuters and local Syria opposition media reported.

A rivalry between Russia and Turkey has heated up as Turkish President Recep Tayyip Erdogan expands his military reach abroad, including into areas where Moscow is also pursuing its own interests. Over the past few years, the primary area of Turkish-Russian competition has been Idlib, Syria's impoverished and rebel-held northwestern province. Last year, Russia backed a Syrian government attempt to recapture the province, and Turkey countered by supporting rebel groups and deploying in its own military to prevent the Russian-Syrian advance.

Moscow and Ankara have backed opposing sides in Libya's civil war, notably by sending Russian and Syrian mercenaries as proxy forces. The fighting between Azerbaijan and Armenia over the disputed Nagorno-Karabakh region has also caused friction between Russia, which has a security pact with Armenia, and Turkey, a strong military backer of Azerbaijan.

Russian officials have criticized Turkey for sending of Syrian mercenaries to fight on behalf of Azerbaijan, saying this could allow hard-line Islamist fighters to enter Russia. Turkey has repeatedly denied dispatching mercenaries.