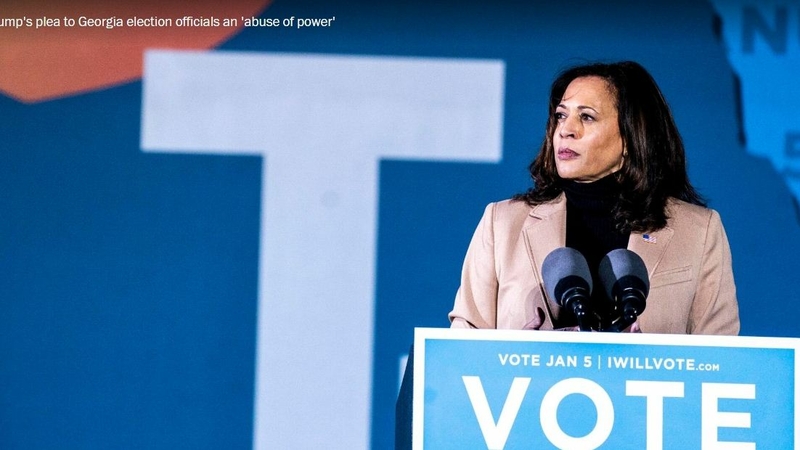 WASHINGTON - Vice President-elect Kamala Harris and other top Democrats swiftly denounced remarks that President Donald Trump made during an extraordinary hour-long phone call with Georgia's Republican secretary of state, in which the president pressures Brad Raffensperger to "find" votes that will overturn the results of the presidential election in the state in his favor.

Bob Bauer, a senior adviser to President-elect Joe Biden's transition team, said the conversation provides "irrefutable proof of a president pressuring and threatening an official of his own party to get him to rescind a state's lawful, certified vote count and fabricate another in its place."

The Washington Post obtained a recording of the call, in which the president repeatedly states that there is "no way I lost Georgia." He makes threats about vague criminal consequences and tells the secretary of state that he's taking a "big risk."

Speaking in Georgia on Sunday, Harris called Trump's conversation a "baldfaced, bold abuse of power by the president of the United States."

Harris was there to campaign for Democrats Jon Ossoff and Raphael Warnock ahead of Senate runoff elections on Tuesday in the state.

During the call, Trump urged Georgia's election officials to act quickly, and suggested that not doing so could endanger the political fate of Sens. David Perdue and Kelly Loeffler, both Georgia Republicans.

"You would be respected, really respected, if this thing could be straightened out before the election," Trump said during the call. "You have a big election coming up on Tuesday."

The two Democratic Senate candidates were among those who quickly condemned Trump for the call.

"When the president of the United States calls up Georgia's election officials and tries to intimidate them to change the results of the election, to disenfranchise Georgia voters," Ossoff said, speaking to supporters, ". . . that is a direct attack on our democracy."

He added: "If David Perdue and Kelly Loeffler had one piece of steel in their spine, one piece of integrity, they would be out defending Georgia voters from that assault."

In a statement, Warnock called on Loeffler to "speak out against the unsubstantiated claims of fraud, to defend Georgia's elections, and to put Georgia ahead of herself. She has not and never will."

Trump was joined on the call by White House Chief of Staff Mark Meadows, as well as longtime conservative lawyer Cleta Mitchell and Georgia-based lawyer Kurt Hilbert. Ryan Germany, who is general counsel for Raffensperger's office, and Deputy Secretary of State Jordan Fuchs were also on the call.

Sen. Dick Durbin of Illinois, who will be the ranking Democrat on the Senate Judiciary Committee if his party does not take the chamber, said the call was "more than a pathetic, rambling, delusional rant."

"His disgraceful effort to intimidate an elected official into deliberately changing and misrepresenting the legally confirmed vote totals in his state strikes at the heart of our democracy and merits nothing less than a criminal investigation," Durbin said in a statement. "The President is unhinged and dangerous."

Trump vaguely threatened Raffensperger and Germany, suggesting that they would be subject to criminal liability if they do not find that thousands of ballots in Fulton County were illegally destroyed to block investigators, a baseless allegation.

"You are going to find that they are - which is totally illegal - it is more illegal for you than it is for them, because, you know, what they did and you're not reporting it," he said. "That's a criminal, that's a criminal offense. And you can't let that happen. That's a big risk to you and to Ryan, your lawyer."

Michael Bromwich, who served as the Justice Department inspector general from 1994 to 1999, suggested that Trump's threats against Raffensperger and Germany could violate federal law that prohibits efforts to deprive voters of a fair election.

"His best defense would be insanity," Bromwich tweeted, adding: "The entire call is astonishing. The bullying, the threats, the insults, the credulous embrace of discredited conspiracy theories. Like a crime boss, Trump occasionally says that all he wants is the truth. But he doesn't - he wants the win."

In a tweet, Rep. Adam Kinzinger, R-Ill., suggested to his fellow lawmakers that any "member of Congress considering objecting to the election results, you cannot - in light of this - do so with a clean conscience."

Sen. Bob Casey, D-Pa., appeared to jab at some of his Senate colleagues across the aisle who have said they will not certify Biden's win without an investigation of voter fraud allegations, which have been unsubstantiated.

"I heard there's a group of Senate Republicans eager to investigate election fraud," he tweeted.

Sen. Josh Hawley, R-Mo., who has pledged to contest the electoral college vote certification, did not immediately respond to a request for comment about Trump's conversation; neither did Senate Majority Leader Mitch McConnell, R-Ky.