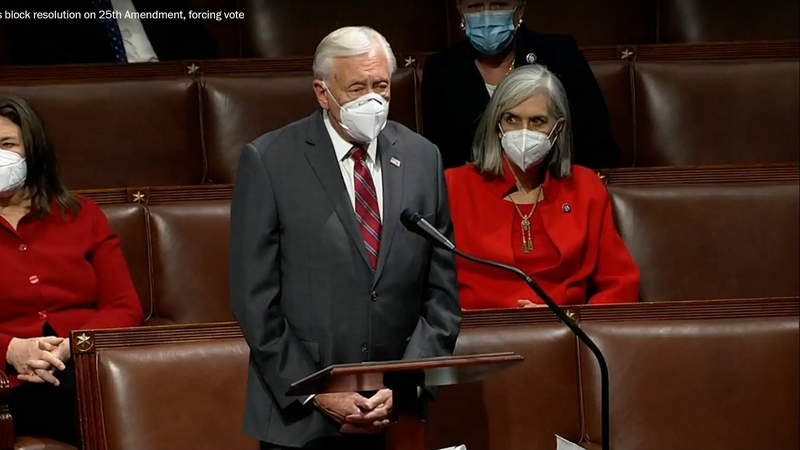 WASHINGTON - President-elect Joe Biden said Monday he is consulting with Senate leaders and the chamber's parliamentarian about whether the Senate can "bifurcate" its schedule, so it can move forward simultaneously with impeaching President Donald Trump and enacting Biden's agenda, including a multitrillion-dollar coronavirus relief plan.

Biden's comments, made Monday just after he received his second dose of the coronavirus vaccine at a Delaware hospital, revealed his most detailed thinking to date about the threat that congressional Democrats' impeachment efforts could overshadow the early days of his presidency.

The remarks also affirmed that the president-elect wants Congress to focus on improving the response to the virus and bolstering the struggling economy ahead of rebuking Trump for his role in inciting a deadly mob that briefly took control of the U.S. Capitol building last week.

"My priority, first and foremost, is the stimulus bill," Biden said Monday, "and secondly to begin to rebuild the economy."

Those sentiments could collide with the determination of many House members to penalize Trump for his role in the assault on the Capitol and to ensure he cannot seek office again. Speaker Nancy Pelosi, D-Calif., has said the House will push ahead on impeachment if Vice President Mike Pence does not move to oust Trump by Wednesday, a step that seems highly unlikely.

Democratic leaders worry that if the Senate is consumed by an impeachment trial for the first few weeks of Biden's term that it will have little capacity to do anything else, and Biden signaled Monday he is looking for a way around that.

"I had a discussion today with some of the folks in the House and Senate," he said. "And the question is whether or not, for example, if the House moves forward, which they obviously are, with the impeachment and sends it over to the Senate, whether or not we can bifurcate this."

Biden has been particularly concerned about Senate confirmation for his Cabinet nominees and getting his national security team in place. "Can we go half-day on dealing with the impeachment and half-day getting my people nominated and confirmed in the Senate?" he said.

Biden campaigned on bringing the country together, and some lawmakers believe that could be more difficult if he launches his presidency amid a fiery effort to punish his polarizing predecessor. But many in Biden's party argue that it will not be possible for the country to unify if Trump is not held accountable for his role in the riot.

Biden has said little about his views on whether impeachment should go forward, suggesting Friday that it is a matter for Congress to decide. But he has made it clear he wants lawmakers to "hit the ground running" on his agenda once he takes office on Jan. 20.

Although the House is expected to vote this week on an article of impeachment, Senate Majority Leader Mitch McConnell, R-Ky., issued a memo last week saying the Senate would not consider the matter until Jan. 19, which would mean a trial would bleed into Biden's term and potentially derail chunks of his legislative program.

Biden was more forceful Monday in discussing the rioters who took control of the Capitol, saying they should be prosecuted. Dozens have been arrested.

"I think it's critically important that there be a real serious focus on holding those folks who engaged in sedition and threatened people's lives and defaced public property and caused great damage, that they be held accountable," Biden said. "And I think that's a view that is held by the vast majority of Democrats and Republicans in the Congress."

Biden added that it is his "hope and expectation" that his agenda can move forward amid impeachment. But he said he has not heard from the parliamentarian about whether it is feasible for the Senate to handle other business during an impeachment trial.

Biden was also asked whether he is "afraid" at all of taking the oath of office outside in the aftermath of the violence at the Capitol. "No," Biden said.

He has previously expressed confidence in the Secret Service, which he said would be handling the event. "I am not afraid of taking the oath outside. I'm getting briefed," Biden said Monday, presumably a reference to intelligence and security briefings.