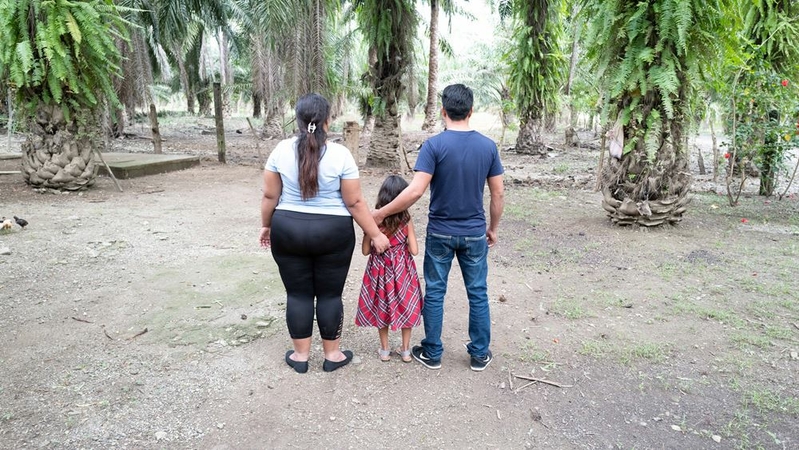 EL PROGRESO, Honduras - Thirty days after they were separated at the U.S.-Mexico border, held on opposite sides of the United States, Antonio and Maily were reunited at midnight in the parking lot of a South Texas detention center.

Antonio looked at his 7-year-old daughter and thought: "They are returning all of my happiness in a single moment."

Attorneys and volunteers watched as they hugged. It was July 2018 - days after the Trump administration's family separations policy was halted. The reunion seemed permanent, a bookend to the most controversial U.S. immigration directive in decades.

But six months later, they were separated again. Antonio went to a scheduled check-in at an Immigration and Customs Enforcement office in central California. He was handcuffed by ICE agents while Maily was in her second-grade class. They have not been together since.

A federal court ordered the government to reunite the thousands of families separated under Trump's zero-tolerance policy. But many of those parents were released from detention without any legal status in the United States. They were back with their children, but immediately subject to deportation and reseparation.

Antonio, a part-time mechanic, landed in Honduras alone on Jan. 16, 2019. He was not allowed to say goodbye to his daughter. Their second separation has so far lasted two years. Maily is now a fourth grader in New Orleans.

"Separating us once was horrible enough," he said between sobs at his home in rural Honduras. "Now it feels like I've died twice." He spoke on the condition that his last name be withheld for fear of reprisals in Honduras.

Two and a half years after President Donald Trump ordered an end to family separations, immigration attorneys and advocates are growing increasingly concerned about reseparations. The policy of taking children from their parents at the border provoked global outrage, but far less attention has been paid to those families - or their legal cases - afterward.

Parents and children emerged with separate immigration cases - often with pending removal orders and no attorneys. In hundreds of those cases, parents have been ordered deported while their children's asylum or visa applications were being processed.

The American Civil Liberties Union announced in November that it had been unable to locate 666 parents who were separated from their children at the border. Since then, attorneys have learned that some of them were reseparated and deported alone. In recent weeks, advocates have located more than a dozen reseparated parents in Central America.

As the Biden administration prepares to launch a task force to potentially reunite hundreds of Central American families, cases such as Antonio's are a reminder of the complicated legal path beyond reunification. It remains unclear what legal status the administration will offer to reunified families and whether it will protect them from deportation. There's no guarantee that reseparated parents will be allowed to return to the United States.

Images of separated children in makeshift detention centers in 2018 prompted an outpouring of anger and activism. The Trump administration said it had separated at least 5,500 migrant children from their parents.

After Trump signed an executive order ending the policy, new images showed tearful reunions. It might have seemed as if the crisis had ended.

But hundreds of parents had been deported without their children; hundreds more were reunited, but issued deportation orders that meant they could be reseparated at any moment. Often parents were unaware of their removal orders, assuming that reunification implied a path to legal status. It did not.

"The government failed to give these parents basic information about their cases," when they were released to be reunited with their children," said Conchita Cruz, co-executive director of the Asylum Seeker Advocacy Project.

According to an analysis of roughly two thousand cases of parents and children separated at the border, about 13% have removal orders, said to the National Reunited Families Assistance Project, a legal cooperative. It's unclear how many of them have been deported.

Weeks after Antonio was reunited with his daughter, an ICE agent put a tracking monitor around his ankle and directed him to check in at the agency's office in Santa Maria, Calif., every 15 days. It was at one of those check-ins, he said, where an agent told him: You don't have anything here. You're going back to your country.

He asked whether Maily could return with him to Honduras. He said he was told to give up custody to a relative in the United States or she would be put up for adoption.

The Department of Homeland Security did not respond to requests for comment.

Antonio, who had fled repeated threats of violence in Honduras, was put on a charter flight back to his country. On his return, he relocated to a new area with his wife, Carolina, and another daughter. Their new home lay in a flood plain. When Hurricanes Iota and Eta blew through in November, it was destroyed. He shared a video that shows him up to his shoulders in water, searching for his possessions.

For a while, Maily stayed with an uncle in California. She would burst into tears without warning, often in her classroom. She explained to her teachers that she had been separated - twice - from her father. She is scheduled to begin therapy in the coming weeks.

"I just don't understand why they did this," Maily, now 10, said by phone.

Antonio and Maily speak on video calls a few nights a week. Antonio asks Maily how her English is progressing. Maily asks Antonio whether he's safe. Her first court date is scheduled for December 2022.

During their years apart, she had tried to come up with ideas of how to get her father back to the United States. Last month, in her latest effort to reunite the family, she scribbled a letter to President-elect Joe Biden.

"Congratulations on your new job as president," she wrote in Spanish. "My reason for writing is to ask you to please help bring my dad and mom and sister to the United States. If you're able to do this I'll be the happiest girl in the world."

She drew a picture of her family, a wide space between herself and everyone else.

Child welfare advocates warn of the trauma inflicted on children who have been separated twice.

"Each time you do this you're just multiplying by an exponent the level of terror," said Ken Berrick, founder of Seneca Family of Agencies, which has been charged with linking separated families to mental health providers. "When this is your only experience as a child it becomes a part of who you are - it has lifelong impacts."

Reunited families were released into legal peril for a range of reasons, each a reflection of a complex immigration system.

Parents were issued notices to appear in courts, but without dates; they unknowingly missed their hearings and were ordered removed in absentia. Some were never given notices to appear in court at all. Others were ordered deported while in detention, but they were inexplicably released and reunited with their children. For hundreds of reunited parents, deportation orders mean they cannot promise their children that they will not be separated again.

Henry, a 47-year-old Guatemalan man, was separated from his 7-year-old son, Brandon, in 2018. When they were reunited three months later, Henry already had a deportation order.

He says his son panics every time they see a police officer. A few months ago, when Henry had a scheduled check-in with ICE, his son called him frantically: Are they going to send you back to Guatemala?

"He's always so scared that I'm going to be deported. But I told him, 'No, they gave me another chance,' " Henry said. "Maybe the U.S. immigration officials want to watch me for a while, to see what kind of a person I am."

Families have discussed what to do in the case of a reseparation. If a parent is deported, he or she can typically choose whether the child should return as well. But because of the conditions the families fled in Central America, those decisions are not straightforward.

"The fact that they don't have any kind of security that they can remain here with their child - that they can be deported at any moment - it just adds to the extraordinary amount of trauma that families have gone through," said Ann Garcia, a staff attorney with Catholic Legal Immigration Network.