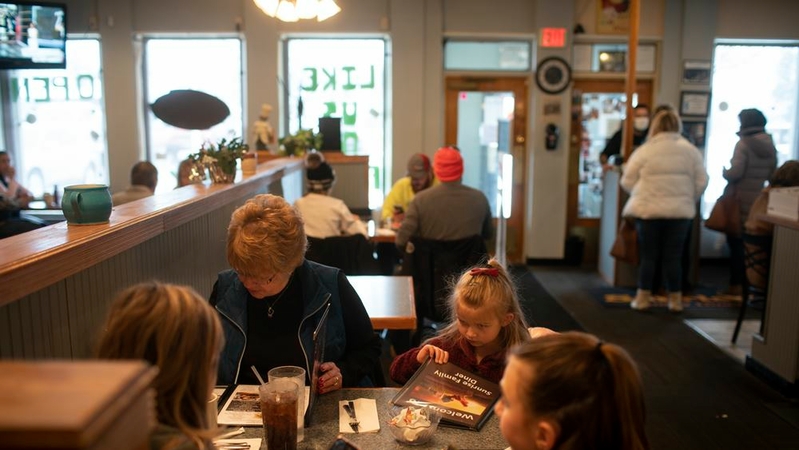 HOWELL, Mich. - It's a Monday morning and the Sunrise Family Diner is full. Retirees in jeans and plaid sit by the window, chatting over coffee and the local newspaper. A sign posted at the entrance urges customers to wear masks, but some don't. They get seated anyway, within arm's length of strangers in other booths.

Michigan is under shutdown, but inside Sunrise Family Diner, you might assume there is no pandemic.

This is the other rebellion. While armed extremists gathered outside the statehouse in Lansing a week after a mob stormed the U.S. Capitol in support of President Donald Trump's false claims of election fraud, dozens of restaurateurs across Michigan held their own protests against reality.

The restaurants are operating in open defiance of the state's polarizing governor and the restrictions she ordered in an effort to slow the spread of the coronavirus. The businesses say the science on which the rules are based - pushed by the state health department, World Health Organization and the Centers for Disease Control and Prevention - is politicized and untrustworthy.

"I don't think it's as bad as they're saying it is," diner owner David Koloski said. "The whole thing with the coronavirus is political. I think Democrats are dug in and unwilling to move on this."

Their protests have thrived for weeks thanks to law enforcement officers who support their cause and state residents willing to travel hours in some cases to patronize businesses where they can flaunt their distaste for Gov. Gretchen Whitmer, a Democrat, and her rules. So far, cease-and-desist orders and fines have done little to dissuade the businesses, and state officials have declined to discuss what recourse they have for dealing with the revolt.

But the consequences are clear, some health professionals say: Even as Michigan's coronavirus rates have declined, many of the state's hospitals remain at capacity because of covid-19 patients.

Less than 40 miles away from Sunrise Family Diner, Lansing's Sparrow Hospital has exceeded 90% capacity since April, even with multiple ICU expansions. Since last winter, more than 100 hospital caregivers have tested positive for the coronavirus and two have died. The hospital has lost more than 160 patients to covid since the pandemic began.

Sparrow president Alan Vierling describes driving past open restaurants and bars - and even more often the obvious house party or big family gathering - and how angry it makes him.

"You see that and you know that there's a percentage of these folks, once they get covid, some of them will die. And it doesn't have to be that way," said Vierling, a registered nurse. "This isn't like getting leukemia, where you can do everything right and get leukemia and die. With this, you have a choice."

The scenario here in Michigan is one that is expected to play out increasingly around the country as the pandemic drags on, presenting a challenge for the Biden administration and its plans to use a science-based approach to combating the virus after the previous administration spent much of the past year downplaying its severity and refusing to mandate restrictions - or even model medically recommended protocols.

Koloski, 39, said he can't afford to abide by the state's guidelines that limit restaurants to takeout service only.

"If we didn't open, we would have shuttered. Doors closed. Out of a house, out of a job, out of a car. Me and the rest of my staff," said Koloski, who has seven employees.

Besides, he said, "I'm not holding a gun to anybody's head and making them come here."

So the diner reopened earlier this month, advertising with a group known as Stand Up Michigan. The group, organized by several western Michigan business owners, has held rallies and demonstrations against pandemic-related restrictions across the state, including at the state Capitol.

Restaurants "can't live on takeout," said group co-founder Ron Armstrong, whose business manufactures displays and exhibits for trade shows. "Some people said: 'Either I'm going to have them come and take my keys or I'm going to have to give my keys to the bank. Those are my two choices, but I will not not be open anymore.' "

Meanwhile, hospitals such as Sparrow are reeling from the consequences of such decisions.

On any given day, the hospital typically has five to 10 ICU beds available - and 30 to 40 patients who need them.

Vierling has been forced to supplement his staff with 90 traveling nurses who work 12-hour shifts, five days a week and live in nearby long-term-stay hotels.

The hospital turned its break rooms into respite rooms after seeing caregivers, one after another, retreat to the rooms to weep. It added massage chairs to soothe and distract.

"If you'd have told me before the pandemic that massage chairs would be one of the biggest, smartest decisions I'd make in this job, I'd say you were crazy," Vierling said. "We have to try to provide some comfort. We're trying to save as many lives as possible, and every time we lose somebody, that's devastating. It's like watching somebody drown slowly for 10 days."

Whitmer announced on Jan. 22 that the state would allow restaurants to resume limited dine-in service beginning Monday. Seating will be limited to 25% of capacity and tables must be six feet apart with no more than six people per table. They also must close at 10 p.m.

"I know that it has not been easy," Whitmer said, referring to the roughly 2½ month ban.

But, she said, data shows that the state's actions have worked, and that if people continue to follow the recommendations of the scientific community, further restrictions might not be necessary.

"The science around this virus is settled, and if we can all wear masks and be very smart about congregating, and not do it unless it's necessary, washing our hands, doing that social distancing, we will be in a strong position in a few weeks," Whitmer said. "And we'll be able to do more. That's the hope."

But even the loosening of some of the rules isn't enough for the members of Stand Up Michigan, many of whom said they would continue operating at full capacity.

At All Star Coney Island, it was a full house on a recent Sunday night, with all but one booth filled. That tabletop was reserved for a large sheet of paper on which customers had written thank-you messages to the owners.

"Freedom is given by God. God bless this business!" one customer wrote.

"Thank you for being Patriots! Freedom!" wrote another.

"People need to use common sense. It's been too long," said a maskless Kathy Holcomb, 67, as she left the restaurant. "We stay safe. We wash our hands. We wear our masks - well, not just now," she added, laughing.

Stand Up Michigan keeps a running list of restaurants that are open in defiance of the ban, posting weekly updates for its members, who also swap intel among themselves on the group's social media site about restaurants they've discovered and businesses that allow customers to walk freely through their establishments unmasked.

The number fluctuates, but has more than 60 restaurants in 33 counties spread across the state from the Ohio border to the northernmost reaches of the Upper Peninsula.

The group's online messaging goes beyond promoting open restaurants to disseminating false information and deceptive data to downplay the risks of the virus. For example, when discussing the risks of indoor dining, Armstrong claims that it is safer to be in a restaurant than it is to be in your home, saying more cases of coronavirus are contracted in small indoor gatherings in people's homes than in restaurants. He does not provide any data to back up his claim.

Hospital admissions have dropped significantly in recent weeks, but 18 of the restaurants in Stand Up Michigan are in places where hospitals remain above 90% capacity.

As of Friday, Michigan had more than 557,883 confirmed coronavirus cases and 14,497 deaths, according to data from the state health department. Positivity rates were dropping as well, with more than half the state's counties reporting seven-day positivity averages of less than 6%. But 17 of the state's hospitals remain at 90 to 100% capacity, including the two in Lansing that serve several surrounding counties.

On Nov. 15, when new restrictions were announced, including the ban on indoor dining, Michigan was at 733 cases per million, according to health department spokeswoman Lynn Sutfin. "Two months in, the current number on our dashboard is 207 per million, a decline of more than 70 percent," Sutfin said.

"You'd like to think if people could see the results and know they're possibly putting people in harm's way, they wouldn't do it," said Vierling, the hospital president. "But with this virus, it's very likely large numbers of people are responsible for deaths of other people and never know it."

Since mid-November, the state liquor control commission has suspended the licenses of 34 establishments for violating the emergency orders. Two restaurants have received fines of several thousand dollars, including a former Big Boy restaurant that was forced to give up its franchise agreement - and the iconic Big Boy statue - over its continued refusal to shut down.

State health officials declined to discuss what recourse they have for dealing with restaurants that continue to defy orders, or their plans for future enforcement.

Restaurants such as Jimmy's Roadhouse, on the west side of the state in the town of Newaygo, have continued to operate through cease-and-desist orders and without a liquor license. It's become a symbol of the restaurant defiance movement.

Jimmy's also has become a destination for indoor-dining tourists, people who travel from all over the state seeking a place to publicly display their disdain for masks and social distancing.

"On the weekends, that's one of the tourist attractions. And people drive three, four hours, with their families, elderly people," owner Jimmy Cory said, noting that one of his "regulars" is an elderly couple that drives two hours from the northern Michigan town of Traverse City.

Cory says the restrictions are merely rules, not laws, and he doesn't plan to follow them.

"Anything outside of the food code and the liquor code that I've been following my entire restaurant career is bull---t and unconstitutional," he said, adding that "curfews are for comrades."

Restaurants in many communities appear to have the support of local police, which is complicating enforcement efforts. OSKAR Scots restaurant in the village of Caledonia, was hit with a cease-and-desist order from Kent County's health department on Jan. 11. A sheriff's deputy visited to let the owner know that the department's phone had been blowing up with reports about the business being open in defiance of the restrictions.

"I said, 'Well what happens next with you?' And he goes, 'Nothing.' He goes, 'I'll be seeing you tomorrow for coffee and breakfast,' " owner Randall Scot recalled.

The sheriff's department did not respond to requests for comment. The county health department said it could not comment on specific cases.

Scot, 52, said a trip to Florida convinced him to ignore the state restrictions. His family visited the Sunshine State, where restaurants are allowed to remain open at 100% capacity, over Christmas.

"I decided at that point of time I'll never shut my dining room down again," he said.

Scot, who received a second cease-and-desist order from the county health department on Jan. 19, said operating at 25% of capacity simply isn't enough.

"I have the right to not be deprived of my life, liberty or property without due process of law," Scot said via a text message. "I have fantastic representation and will fight if I have to. I am STANDING UP."