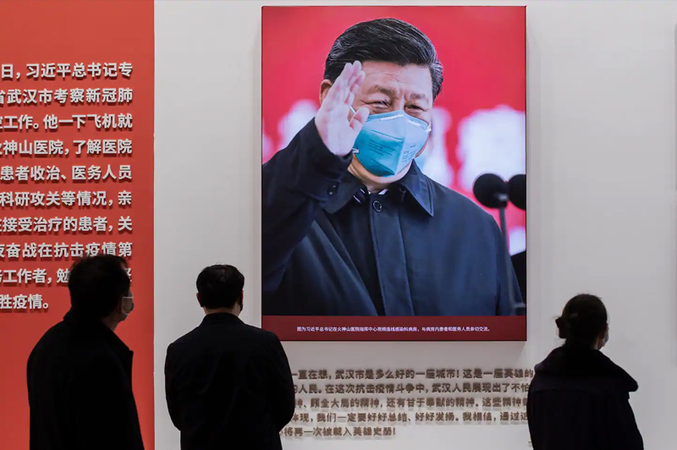 TAIPEI, Taiwan - For the World Health Organization, its fact-finding mission to China left many questions on the possible origins of the pandemic. In Beijing, however, the outcome was framed Wednesday as something solid: vindication and triumph.

The WHO's headline announcement - that it would rule out the possibility the virus accidentally leaked from a Wuhan lab - was hailed by Chinese officials and in state media as effectively silencing claims that China was hiding secrets and trying to deflect blame.

But some prominent public health experts in the West questioned whether China offered enough freedom for the WHO team to investigate fully Wuhan's piece of the global pandemic puzzle.

Zeng Guang, chief epidemiologist at the Chinese Center for Disease Control, even tried to turn the tables. Other locations in the world, particularly U.S. labs, must be investigated next, said Zeng, because "historically the United States … launched biological and chemical warfare."

"China was the big winner," said Yanzhong Huang, a senior fellow for global health at the Council on Foreign Relations. "We understand that they are doing their work within the parameters of the government. But you don't want to jump to a conclusion based on several hours of conversation with Chinese scientists."

As the WHO mission departs China this week, it has yielded scant new public information about the pandemic's roots. The joint Chinese-WHO team mirrored the generally accepted scientific view that the coronavirus most likely jumped from bats to an intermediary species before infecting humans.

The WHO team reiterated the Chinese view that it is possible the virus was carried by frozen food, a hypothesis that is hotly debated among researchers and could imply the virus was brought into China from another country.

The officials concurred with Chinese counterparts that the virus could have been spreading around the world before erupting in December 2019 in Wuhan. And they emphatically ruled out a lab mishap after asking Wuhan lab officials if they thought it were possible.

The comments have revived skepticism among the international agency's critics, as well as the Biden administration, about the value of the politically fraught trip coordinated by Chinese officials, and cast a cloud over a WHO team that is now expected to move on to other regions, possibly Southeast Asia, in the quest to learn more about the virus.

At the State Department, a spokesman said the United States would continue to collect its own information "rather than rush to conclusions that may be motivated by anything other than science," while White House spokeswoman Jen Psaki called for putting separate, U.S. experts in China.

Jesse Bloom, a virologist at the Fred Hutchinson Cancer Research Center, was "surprised to see some members of the team dismiss the accidental lab leak theory while seeming to suggest, without any specific evidence, the possibility that frozen food might have played a role."

"I remain agnostic about the origins of SARS-CoV-2," said Bloom, referring to the virus' official name. "But it's important to have a careful independent accounting of the research into SARS-related coronaviruses that was being done in labs in Wuhan before the emergence of this pandemic, and it doesn't appear that this team accomplished that."

In early 2020, China staunchly resisted an international inquiry and decried it as a politicized effort by the Trump administration to demonize China. Beijing punished Australia with bruising trade tariffs after Australia proposed the probe, and the idea of an inquiry into the virus origins grew highly charged after Republican officials claimed that the virus was a Chinese bioweapon.

Although the claim was widely debunked, a small minority of researchers maintain it's possible that a Wuhan lab accidentally leaked the virus during benign research. Other experts argue the genetic makeup of SARS-CoV-2 more likely points to natural evolution in an intermediate species.

Tuesday's news conference, led by Chinese health officials, highlighted questions reaching back months about the WHO's ability to conduct an independent probe in China.

The terms of the visit, forged after lengthy negotiations with the Chinese government and made public in November, did not propose any inquiry into labs such as those at the Wuhan Institute of Virology (WIV), a leading center that conducts bat coronavirus research with U.S. government funding and U.S. collaborators.

After the WHO team left quarantine on Jan. 28, its itinerary included interviews with Wuhan doctors, former patients, and a stop at an exhibition hall dedicated to the sacrifice of Chinese medics and soldiers who fought the outbreak.

On Feb. 3, security guards lined the streets outside the WIV and shooed away journalists. Peter Daszak, a WHO delegation member whose nonprofit, EcoHealth Alliance, has formerly collaborated and coordinated U.S. grant funding to the WIV, assured reporters from a car that the WHO team was "asking all the questions that need to be asked."

Jamie Metzl, an adviser to the WHO and a former Senate aide to Joe Biden, said that "a two-week investigation where they're being driven around by the Chinese government and given access to cherry-pick people and data doesn't clear the bar of credibility."

"We must support their investigations, but they can't be stage-managed by the country being investigated," he said.

Richard Ebright, a microbiologist at Rutgers University who has accused the WHO of bending to Chinese pressure, said asking questions wasn't enough.

"Any institution and nation seeking to clear its name would've moved quickly to make available all its databases of genetic sequences and strains, provided lab notes, records and private interviews with research, waste removal and janitorial staff," Ebright said. "None of that happened or was even requested" as part of the agreement to send experts to China.

Skeptical experts argue that records from the WIV should be analyzed closely because the institute collected nearly 300 bat coronaviruses from southwest China in the past decade, including two of the closest genetic relatives to the SARS-CoV-2 virus. These experts do not suggest that the virus was engineered to be a bioweapon.

At Tuesday's news conference in Wuhan, WHO and Chinese officials said it was unclear what animal was the intermediary source but offered possibilities, including pangolins. But no animals at the Huanan Seafood Market tested positive for the virus, they said.

Daszak told reporters afterward that the probe should press on to Southeast Asia, which shop records showed could be the source of imported wild animals that arrived at the Huanan market.

After the WHO event ended Tuesday, Yan Yuxin, an anchor on the state broadcaster's evening newscast, said the pandemic was a "global challenge" that required "global traceability."

Shortly before midnight, the Reference News, a newspaper for government officials, posted an online commentary directed at Chinese critics: "We advise those Western politicians and media who just open their mouth to be less disruptive and not to be a stumbling block while humanity cooperates to fight the virus."