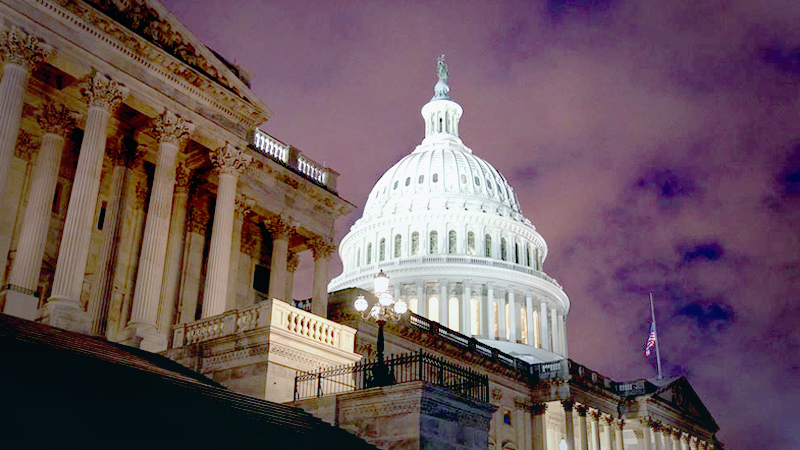 Democrats pivot back to Biden's stimulus with Trump's trial done

With Donald Trump's impeachment trial behind them, Democrats are quickly pivoting back to President Joe Biden's priorities, particularly his $1.9 trillion stimulus plan and confirming the rest of his cabinet.

Lawmakers face a short turnaround to approve another round of stimulus payments, jobless compensation and funding for schools and vaccines before key benefits from the last round of pandemic aid expire on March 14. In less than four weeks, Democrats must pass a bill out of the House and get all 50 Senate Democrats to back the legislation.

That will likely require amending some provisions, such as the $15 federal minimum wage requirement, that at least two Democratic Senators -- Kyrsten Sinema of Arizona and Joe Manchin of West Virginia -- say they won't support. Any changes made in the Senate would mean that the bill would have to go back to the House for another vote.

The eagerness of congressional Democrats to move past Trump was evident from start to end of the shortest Senate impeachment trial in history. The agreement on the trial format between Senate Majority Leader Chuck Schumer and GOP leader Mitch McConnell kept the proceedings compressed, and the four days of arguments ended ahead of schedule.

After Senators voted on Saturday to allow witnesses to testify -- a surprise result that risked delaying the trial's conclusion by several weeks -- House impeachment managers and the former president's defense team agreed to enter a public statement into the record. That let the chamber move on to a verdict that day, acquitting Trump.

Although Democrats expressed disappointment in the outcome, they said they are ready to put the former president behind them and focus on Biden's priorities.

"We in Congress need to move forward with delivering the expanded unemployment checks, the stimulus checks, the reinvestment in our economy that the American people so desperately need and deserve," Senator Chris Coons, a Delaware Democrat who is close to Biden, said Sunday on ABC's "This Week" program.

Biden continued pushing ahead as the trial was going on, meeting with a group of governors and mayors as well as leading chief executives including JPMorgan Chase's Jamie Dimon and Walmart's Doug McMillon to rally support for his stimulus plan. With Trump's impeachment no longer consuming national attention, Biden plans public events this week to refocus the country on fighting the pandemic and bolstering the economy, including a town hall event Tuesday in Milwaukee.

Although seven Republicans joined with Democrats in voting to find Trump guilty -- falling short of the 67 votes required for a conviction -- it's unlikely that bipartisan showing will repeat itself on the economic relief legislation.

Ten Republican lawmakers -- including Senators Susan Collins of Maine, Mitt Romney of Utah and Lisa Murkowski of Alaska, who all voted to convict Trump -- have floated a $618 billion stimulus proposal that keeps Biden's plans for school and vaccine funding, but pares back unemployment benefits and stimulus checks, and completely eliminates key Democratic priorities, including $350 billion in state and local aid and family tax credits.

These Republicans had a series of meetings with Biden and White House staff on the potential for a bipartisan stimulus approach, but despite both sides calling the meetings productive, there has been little movement to bridge the gap between Biden's $1.9 trillion proposal and the GOP plan, which is approximately one-third of that.

House committees approved the legislation last week under a fast-track budget reconciliation framework, that will allow them to move the bill with simple majorities in both chambers, thanks to a tie-breaking vote from Vice President Kamala Harris in the Senate. Neither chamber is scheduled to be in Washington this week, but the House Budget Committee is planning to assemble the bills approved in committee to prepare the stimulus package for a vote on the House floor the week of Feb. 22.

House Speaker Nancy Pelosi has said that she will send the bill to the Senate as soon as it passes the House. Schumer is looking for ways to speed up the process once the bill reaches him, which include bypassing Senate Finance Committee approval for parts of the bill in order to get the legislation to Biden before federal unemployment benefits expire on March 14. Republicans have criticized that approach, saying Democrats should follow the regular legislative process.

Despite several hurdles to clear an economic relief bill in the coming weeks, Democrats have already set their sights on their next move: an infrastructure and jobs bill. Biden has already begun meeting with senators of both parties to discuss potential proposals on physical infrastructure upgrades, rural broadband internet and renewable energy investment.

In a move that could ease negotiations on an infrastructure bill, House Appropriations Chair Rosa DeLauro and Senate Appropriations Chair Patrick Leahy's plan to restore lawmaker-directed spending, known as earmarks, which Congress banned a decade ago. The practice allows lawmakers to insert funding for pet projects into legislation and is seen as a useful tactic to get members to back large ambitious bills, but it has been the source of scandal and abuse by some lawmakers.

DeLauro plans to release details about reinstating earmarks in the coming weeks, House Appropriations spokesman Evan Hollander said. It will include more transparency and limits on the total dollar amounts and recipients.