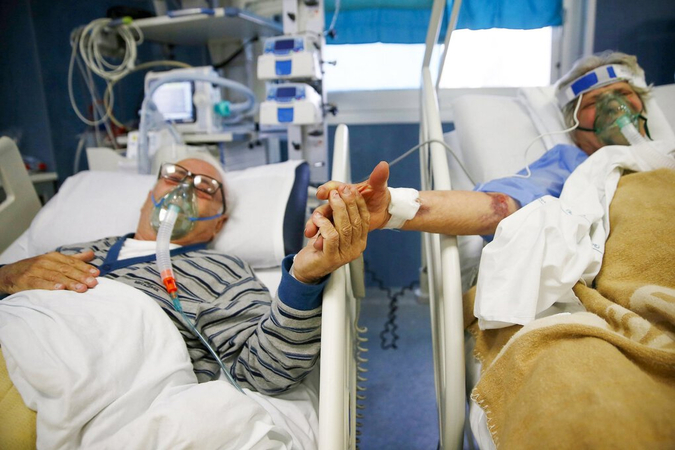 While its AstraZeneca covid vaccinations are suspended, Europe is confronting a third wave

For three weeks, operating 12 hours a day, a convention center in Rome raced to vaccinate Italians before a more contagious variant of the coronavirus took hold. The hope was that despite lagging vaccine supplies, Italy could beat back a third wave of infections and deaths.

That the race had been lost was beginning to sink in on Monday, when much of the country went into lockdown amid rising infections. Then Italy joined other European countries in suspending the use of the AstraZeneca vaccine amid uncertainty about whether it is linked to a handful of rare blood clots and deaths. The convention center has gone dark. A hall that had been giving out 1,800 vaccinations per day now has its doses in storage, guarded by a skeleton crew - and there are fears that the pause in vaccinations across Europe will allow infections to spiral even more out of control.

European citizens were already looking with envy at the United States, Britain and other nations that have been speeding along with their vaccinations, contributing to a decline in covid deaths in those countries and enabling the return of more normal lives. But there is now growing fury that European mismanagement of vaccines has allowed an avoidable third wave. And many public health experts say that halting the AstraZeneca vaccine, even temporarily, is a miscalculation that may emerge as the biggest mistake yet.

"With every day of vaccination delay, there are hospitalizations and deaths," said Fabrizio Pregliasco, a virologist at the University of Milan.

Even if the European regulator confirms it's safe to continue administering the AstraZeneca vaccine - a report is due Thursday - many experts fear governments may have permanently lost their citizens' confidence in this shot and further damaged the inoculation campaign.

While coronavirus cases have been dropping in the United States, infections across the European Union have risen 29 percent in the past two weeks. The more contagious coronavirus variant first identified in Britain now accounts for more than half of the cases in most E.U. countries.

Athens, facing a spike in cases, just turned over a hospital to be used exclusively for coronavirus patients.

And Germany's top virologist, Christian Drosten, warned this week that he expected his country to be in a situation at Easter like it was at Christmas. The variants make things "drastically more difficult," he said on a podcast.

In that context, many scientists were aghast when, one by one, European countries announced they were pausing AstraZeneca vaccinations, a central component of the E.U.'s inoculation plan.

Denmark and Norway halted their programs last week, but the big shift came after Germany said it had identified seven cases - higher than statistically expected - of a rare cerebral blood clot in relatively young people who had been recently vaccinated. The country's public health institute asked to stop AstraZeneca vaccinations while further assessment was underway.

The pressure in other countries to follow suit was intense. Few politicians want to be blamed for moving forward with a vaccine that later turns out to be hazardous, when others were more cautious.

"There is political pressure. In a lot of countries there's a domino effect," said Steven Van Gucht, the head of viral diseases at the public health institute in Belgium, one of the few E.U. countries that resisted a suspension.

"If we continue with this approach, we will have to pause the vaccination campaign over and over again," every time unusual deaths or medical conditions emerge after a vaccination, he said. "That's a dangerous slope."

Recognizing that even a short pause may have long-term impact on acceptance, French Prime Minister Jean Castex declared Tuesday that he would be among the first to get an AstraZeneca vaccine once his country's suspension is lifted, assuming regulators declare that it's safe. British Prime Minister Boris Johnson also said he'd get a vaccine from the manufacturer "very shortly," amid reports that Brits were skipping their vaccine appointments this week.

The suspensions "have damaged confidence in vaccinations very much," said Antoni Trilla, dean of the medical school at the University of Barcelona, whose hospital has 900 doses of AstraZeneca's vaccine in its freezers.

"People will say, 'I don't want the one that's been on TV or in the newspaper that produced strange things, I want the other one,'" he said.

Even if the vaccine does turn out to increase the risk of blood clots, that may turn out to be an acceptable risk, he said.

"Working with my colleagues for a full year with covid patients, having seen people in the ICU, having seen how severe this disease can be, I will take as much risk as possible," Trilla said.

Britain, which has administered millions of doses of AstraZeneca, said it hasn't seen an abnormal increase in blood clots like the cluster Germany flagged. Many scientists are doubtful that the cases are statistically meaningful and tied to the vaccines, although they say reports of any unusual events deserve scrutiny.

"Many people, including me, don't think this is real," said Paul Hunter, an infectious-disease expert at the University of East Anglia.

"This is very likely a random association and not a causal relationship," he said. The Germans "want to be able to explain it to people, to tell the people what the evidence is, about whether this is real or not."

The European pause further slows a vaccination campaign that was already lagging.

Fewer than half of Italians 80 and older - the group most vulnerable to the virus - have received even a single dose. The country has fully vaccinated only one in every 28 of its citizens. That means hospitals remain at risk of being overwhelmed by the more contagious variant, which also appears to be deadlier than earlier strains.

Europeans are increasingly frustrated as they see their rich-world peers speed ahead of them.

"If the U.S. president says that by the 4th of July they'll be celebrating their independence, from the pandemic, too, for an Italian or a European who's still a shut-in, wearing masks, and dealing with work-related issues, this is irksome," said Massimo Bertoni, 54, the second-generation owner of a high-end clothes shop in Rome's center that was founded in 1956. He had to shutter it - yet again - because of the latest lockdown.

"It's very jarring, it bothers you, it makes you angry," he said.

The vaccine debacle is even more notable since wealthy Europe is home to a slew of pharmaceutical companies whose production capacity could have been ramped up last year had there been major public investment, as was the strategy in the United States with Operation Warp Speed. Instead, Europe moved slowly and focused on buying the vaccines as cheaply as possible.

The strategy ensured they weren't competing against each other, but it also meant that the vaccine decisions of a rich country like Germany were hamstrung by the economic concerns of countries such as Bulgaria, which is less than half as wealthy.

"This stingy approach was completely wrong," said Guntram Wolff, director of Bruegel, a Brussels-based economic policy think tank. "It's really an order of magnitude difference. It's ridiculous. Whether the prices of a vaccine is 10 or 20 or 30 or 50 euros, even, what's the daily income of a person in lockdown compared to not in lockdown? The difference is huge."

He noted that when European countries are chipping in for an $893 billion pandemic bailout fund, devoting a few billion more euros to vaccine development to prevent vast economic damage would have been extremely cost effective.

There were already warning signs for Europe in December, as Britain, the United States and Israel shot into action with aggressive vaccination campaigns. European countries started at about the same time - but the supplies of E.U. vaccines were so much lower that a gap quickly opened.

The difference might not have mattered as much had the more contagious variant not started spreading. That effectively sparked an epidemic within the epidemic, making measures to combat viral spread less effective.

Then, AstraZeneca announced it would deliver fewer than half of the doses it had promised in the first months of the year.

The change infuriated many European policymakers, who noted that the Anglo-Swedish company seemed to have no difficulty supplying Britain with millions of doses, some of them manufactured on E.U. territory. Relations with the drug company quickly soured.

AstraZeneca's clinical studies were also short on data about the effectiveness of the vaccine for older people - there just weren't many of them enrolled in the trials - and so many E.U. countries initially restricted their use to younger age groups even though the E.U.'s regulatory agency, the European Medicines Agency, had declared the inoculation suitable for people of all ages.

The supplies are desperately needed.

At the Ancona University Hospital in Italy's hard-hit Marche region, the more contagious variant has overwhelmed its wards, sparking a massive change in the past two months. More people are hospitalized there with covid-19 than at any point since last April.

"The only other way to contain [this variant] is with vaccinations," said Stefano Menzo, the hospital's laboratory director. "The problem is, we don't have enough vaccines."