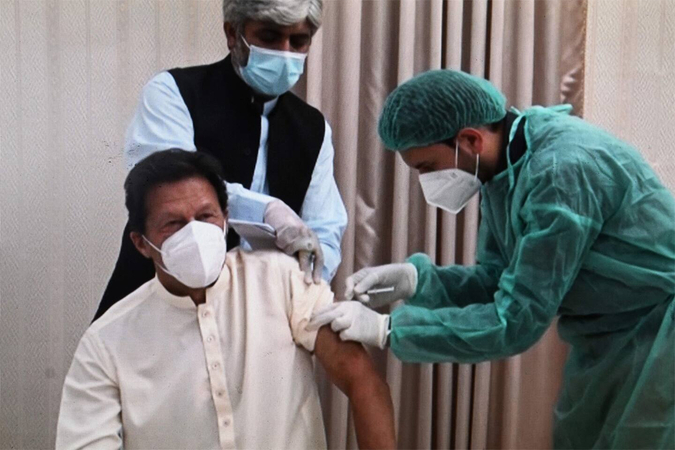 ISLAMABAD, Pakistan - Pakistan's prime minister, Imran Khan, tested positive for the coronavirus Saturday, two days after receiving his first dose of a vaccine, raising fears among health professionals that the news could heighten vaccine skepticism in a country already deeply wary of inoculation.

Khan was injected with China's Sinopharm vaccine on Thursday and was probably infected before then, according to Pakistan's Health Ministry. The Sinopharm vaccine requires two doses about a month apart and can take up to 21 days after the second injection to become fully effective.

Minutes after the news broke of Khan testing positive, debate about the vaccine's effectiveness heated up on social media in Pakistan and Sinopharm began trending here on Twitter.

The Health Ministry quickly responded that the prime minister was not fully vaccinated when he contracted the virus.

"He only got the first dose merely two days ago which is too soon for any vaccine to become effective. Antibodies develop two to three weeks after the second dose of two-dose covid vaccine," it said in a tweet.

But doctors and experts fear such statements will not be enough.

"In Pakistan, we already have skepticism, conspiracy theories and negative propaganda about vaccines," said Javed Akram, one of the country's top doctors and the vice chancellor of the University of Health Sciences, Lahore.

"Look at what people think of the vaccine for polio, a disease which has been eliminated across the world, nearly," he said. Many Pakistanis refuse to allow their children to get a polio vaccination because of allegations spread by hard-line religious leaders that it will render them infertile. Pakistan remains one of just two countries in the world where polio is endemic.

"Imran Khan tested positive even after receiving the vaccine, this shows that vaccines imported into Pakistan are of no use," read one tweet by a Pakistani user from Peshawar who identified himself as Lawangeen Khan.

Another user agreed that the prime minister's infection proves the vaccine fails to protect against the virus.

Khan from Peshawar added, "May God recover him [from his illness] soon."

Some trials have shown China's Sinopharm to be less effective than its Western counterparts, but others have shown that its efficacy is on par with that of vaccines manufactured by Pfizer-BioNTech and Moderna. However, little clinical data on Sinopharm has been released publicly.

China was the first country to provide Pakistan with coronavirus vaccines, a sign of growing ties between the two. The country also completed trials for the drug that drew thousands of participants, despite fears and skepticism.

Pakistan is experiencing a third wave of coronavirus infections and imposed new lockdown measures Saturday after recording nearly 4,000 new cases, the highest in a single day in eight months.

The number of daily hospital admissions and people receiving critical care is rising fast, Asad Umar, the minister leading the government's response to the coronavirus, warned in a tweet. He said if Pakistanis do not comply with the current restrictions, a tighter lockdown will be imposed.

"Please be very very careful. The new strain spreads faster and is more deadly," he said, referring to the variant of the coronavirus first detected in the United Kingdom.

Khan's positive test was announced by Faisal Sultan, his aide, who said in a tweet that the Pakistani leader is self-isolating at home but did not elaborate on his condition.