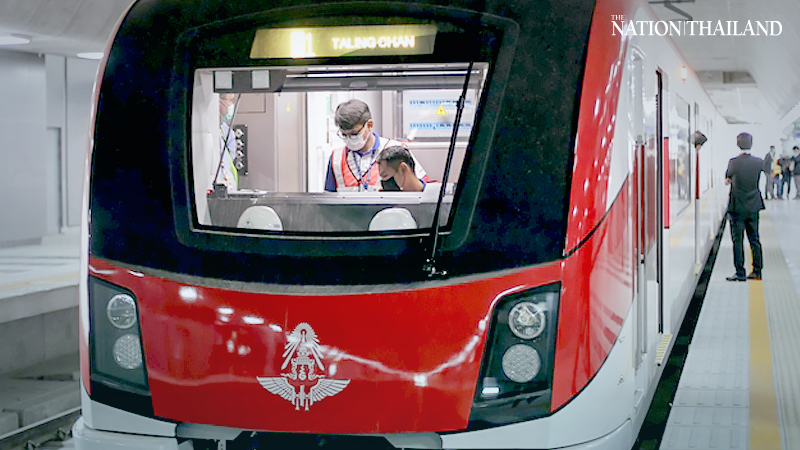 SRT Red Line may not open this year as scheduled

Bangkok’s Red Line (Bang Sue-Rangsit) may not start running by the end of this year as planned due to several problems that need to be solved first, the State Railway of Thailand (SRT) announced recently.

The first problem is a delay in the delivery of the electromechanical system and passenger bogies, which according to the contract were to be delivered between February and September.

The SRT had signed the contract with MHSC, a joint venture between Mitsubishi Heavy Industrial, Hitachi and Sumitomo Corporation.

The legal team is working on the matter and expects to have a new deal by mid this month. The service was scheduled to start trial runs by July and start running commercially by November.

SRT sources also say that THB10.35 billion is still required to complete the construction of the line and that the agency is preparing a report for the Transport Ministry’s consideration.

Meanwhile, the Japan International Cooperation Agency (JICA) may provide additional funding if it is sought by the Public Debt Management Office (PDMO).

The Mass Rapid Transit Authority (MRTA) and the SRT have signed a memorandum of understanding (MoU) for the construction of the THB20-million tunnel connecting the Bang Sue Grand Station and MRT Blue Line.

Separately, fares on the Red Line will range between THB12 and THB42, averaging at THB1.01 per kilometre. The Bang Sue-Rangsit line will have 13 stations and commuters will have a choice of three types of tickets:

2. Student cards: Children under 90-centimetres in height can travel for free, while those under 14 years of age and no taller than 120cm will get a 50-per-cent discount. Students get 10 per cent discount.

3. Seniors card: Everybody above the age of 60 will be given a 50-per-cent discount. The discount is applicable on both smart cards and regular tickets.