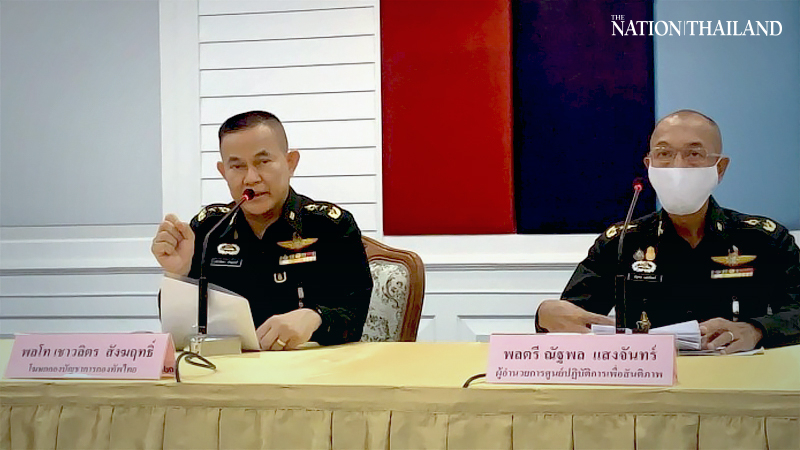 The Thai Army called a press conference on Tuesday to acknowledge its image was tarnished by a fake Covid-19 vaccine scam perpetrated by one of its medics during a United Nations peacekeeping mission.

Army spokesman Lt Gen Santipong Thammapiya confirmed that a Thai Army doctor had offered fake vaccinations to soldiers on a peacekeeping mission in South Sudan. The doctor held the rank of lieutenant and was a field medic in the Thai-South Sudan Horizontal Military Engineering Company.

The Army had acknowledged the problem and allowed its soldiers to complete their mission before transporting them back to Thailand in March last year, said Santipong.

“This incident affects the image of the Thai Armed Forces and Thailand in the United Nations mission. It is a serious disciplinary offence and also violates ethical standards as the wrongdoer is a doctor," he said

The spokesman also revealed the Army medic is accused of deceiving his commanders and troops into receiving vaccinations, claiming it was the head doctor’s order. A UN investigation found he injected them with tetanus vaccine and saline and charged them Bt500 each. The scam netted him more than Bt100,000, according to the investigation.

The medic absconded after being sent back to Thailand, and will be discharged from military service, said Santipong. Meanwhile, the Bangkok Military Court has issued a warrant for his arrest while the Medical Council is considering whether to revoke his doctor’s licence.

The United Nations had acknowledged the incident did not affect Thai soldiers’ performance in their South Sudan peacekeeping mission, which remains active, he added.

Moreover, Thai authorities would deliver Covid-19 vaccine to the troops in South Sudan, while the commander-in-chief had ordered the selection process for Thai peacekeeping missions abroad to be tightened, he said.