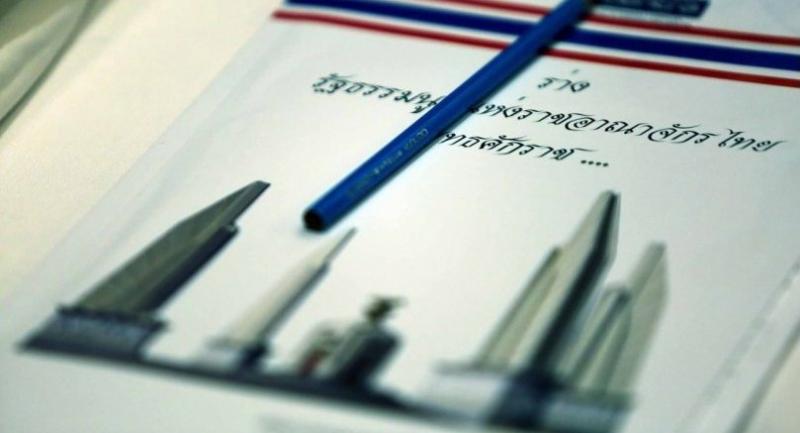 New constitution to be promulgated tomorrow; tight control of political parties will continue.

WITH THE NEW constitution to be promulgated tomorrow, the government has yet to spell out exactly when Thailand will hold new elections.
What is clear is that the government will continue to tightly control political parties after the new constitution takes effect, as the next election is expected to take place more than a year from now, Deputy Prime Minister Prawit Wongsuwan said yesterday.

According to the time frame specified in the new charter, up to 570 days will be required to complete the required organic laws.
Prime Minister Prayut Chan-o-cha yesterday suggested that political parties would need to wait. “The security authorities will consider that. We also need to maintain order until elections,” he said.
His Majesty King Maha Vajiralongkorn is expected to sign the charter tomorrow and hand it to Prayut in a royal ceremony to be held at the Ananta Samakhom Throne Hall in Bangkok.
At his weekly press briefing yesterday, Prayut reaffirmed that the ceremony would proceed as was announced in the Royal Gazette on Monday.
The ceremony is scheduled to be held at 3pm but the charter will be go into effect at 12.01am on the same day, he said, making it retroactively effective.
“Everything is prepared,” the premier said. “Whether it will go fast or slow, everything will follow the road map. I’m not going to say anything else.”
Prayut will explain the promulgation publicly tomorrow after the royal ceremony via |a TV pool address, according to assistant |government spokesperson Colonel Atisith Chainuvati.
Deputy Prime Minister Wissanu Krea-ngam has specified how long the junta’s main bodies will continue to function, Government Spokesperson Lt-General Sansern Kaewkamnerd said. The National Reform Steering Assembly will be dissolved after draft bills on national reforms and strategy are enacted within 120 days after the charter’s promulgation, Wissanu said.
The National Legislative Assembly (NLA) will be dissolved 15 days before the election. The Constitution Drafting Commission (CDC), meanwhile, will function until 10 organic laws are drafted with 240 days after the promulgation.
Sansern added that the government would still enact orders under the interim charter’s Article 44 as permitted by the new charter’s Article 265. Current government officials that want to compete in the election need to resign within 90 days after the promulgation, he added.
CDC chairman Meechai Ruchupan |yesterday affirmed that the commission |would finish writing the 10 organic laws |within the 240-day time frame.
But Meechai said he was unsure exactly when the next general election would be held, adding that it would depend on when the organic laws are promulgated.
The chief drafter said the first four organic laws necessary for holding the next election were the political party, the Election Commission, the MP election and the senator selection laws. He said it would take 150 days for the next election to be held after those laws were enacted.
Meechai said he would submit the first two laws on the Election Commission and political parties to the NLA for deliberation by April 18. The NLA will then have 60 days to deliberate and approve them.
The CDC will then submit the other two key organic laws possibly in September, which means they will use almost the entire eight-month period allowed to draft the required laws.
Senior figures in the private sector yesterday said local capital markets would benefit from the imminent promulgation of the new constitution.
Stock Exchange of Thailand president Kesara Manchusree said yesterday that she believed the promulgation of the new constitution would help restore foreign investors’ confidence in Thailand, as the country was moving closer to the next general election.
“More capital is going to flow into the Thai stock market. Promulgation of the new constitution will help boost foreign investors’ confidence. Also, the strong Thai economy will help draw investment,” she said.
Worawan Tharapoom, president of the Federation of Thai Capital Market Organisations, said yesterday that the promulgation of a new constitution indicated that the post-coup government was following the timeline in its promised road map for a return to democracy.
“The next election should take place a little over a year after this. At this time the government will have some time left to reform the country. And they should be able to help attract investments from businesses that have no courage to invest,” Worawan said.
She also said she was optimistic that the new charter would have a positive effect on the Thai stock market.