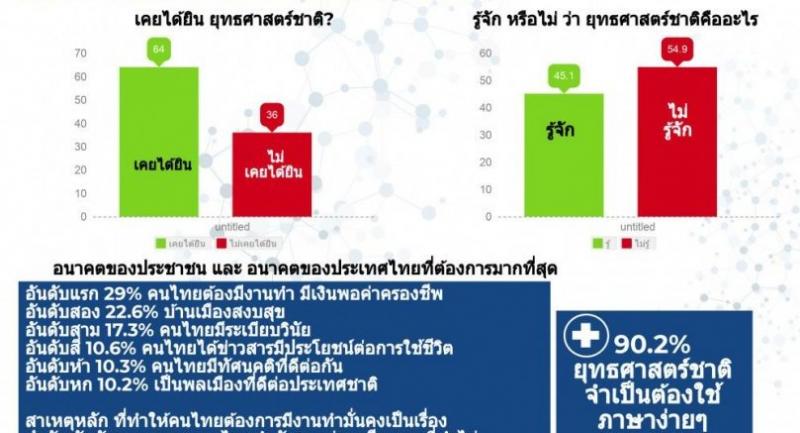 MORE THAN half of the Thai people remain in the dark about the national strategy that is expected to soon pass the National Legislative Assembly (NLA) and to be influential in setting the country’s direction for the next 20 years, a survey released yesterday has found.

The Super Poll, which interviewed 1,150 people of various backgrounds during June 5 to 15, found 54.9 per cent of the respondents said they had no idea what the national strategy was.
However, 64 per cent of those surveyed said that had heard of the term, while 90.2 per cent said the national strategy should be better explained to the general public so that they could become involved in also protecting the national interest.
The poll was released after the Cabinet presented the 20-year National Strategy plan to the NLA on Friday.
The creation of the plan was included in the 2017 Constitution as part of the junta’s attempt to redirect the country after a long period of political conflict that had held the country back economically, politically and socially.
Noppadol Kannika, director of Super Poll, said the lack of familiarity with the national strategy could be explained by the lack of proper public communication about the plan. Most discussion had been clouded by academic jargon that distanced the plan from people’s everyday lives.
The poll director also said that the strategy itself was centred on state power, rather than issues more salient to average Thais.
The public was not involved in creating the plan, which then did not reflect their priorities and was not properly communicated, resulting in both a poor national strategy and the lack of support from Thai citizens, Noppadol said.
The survey’s respondents also expressed concern over the nation’s economic situation. Nearly one-third (29 per cent) said that the future they wanted most from the country was to have a proper job with sufficient pay to cover their costs of living.
They did not want migrant workers to steal their jobs, the respondents said. They also placed higher importance on their concerns about jobs than public peace. In follow-up interviews, the pollsters found that working people saw political unrest as not involving the majority of people, while fear of unemployment did.
Respondents said that migrant workers were today getting more jobs than were Thais and so placed the highest importance on improving the employment opportunities.