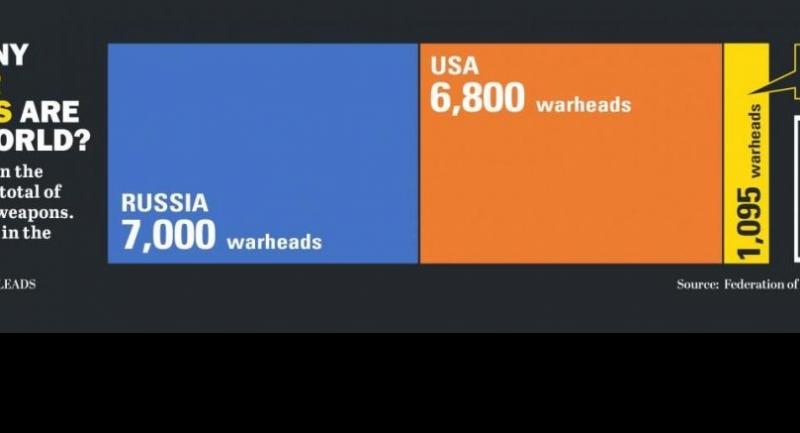 How many nuclear weapons are in the world?

Nine countries in the world possess a total of 14,900 nuclear weapons and 93 per cent of them are in the US and Russia, according to data from the Federation of American Scientists.

The US, Russia, UK, France, China, North Korea, India, Pakistan, and Israel have the nuclear weapons. The US and Russian arsenals are greatly reduced from their Cold War days, but still each of them retain thousands of weapons.

The US, Russia, China, France and UK are NPT-designated nuclear powers.  Israel has not officially acknowledged its programme, but the Israeli arsenal is widely understood to consist of about 80 weapons.

However other estimates suggest that the number of nuclear weapons in world could be higher.

According to a report from the Stockholm International Peace Research Institute (SIPRI), if all nuclear warheads are counted, these nine countries together possessed a total of approximately 15,395 nuclear weapons compared with 15,850 in early 2015.

However, under the international deal, Iran agreed to curb its sensitive nuclear activities in return for the lifting of economic sanctions. Last year Japanese Foreign Minister Taro Aso stated that Japan possesses the knowledge and ability to produce nuclear weapons, but has no plans to do so.

The SIPRI annual nuclear forces data shows that while the overall number of nuclear weapons in the world continues to decline, none of the nuclear weapon-possessing states are prepared to give up their nuclear arsenals for the foreseeable future.