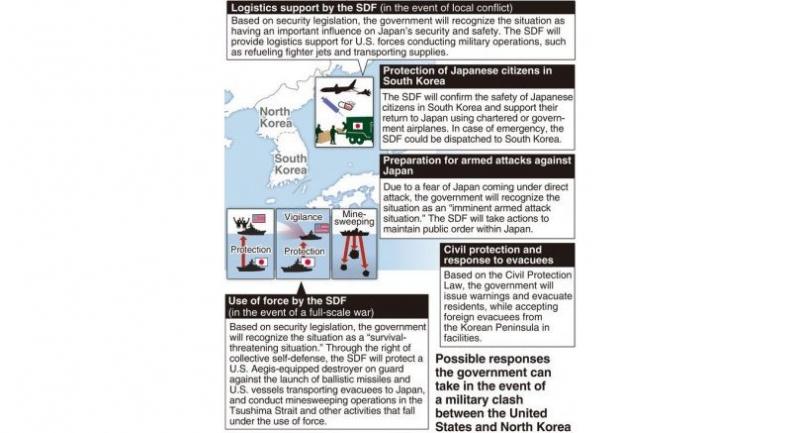 The United States has deployed the nuclear-powered aircraft carrier USS Carl Vinson to waters near the Korean Peninsula amid rising military tensions over North Korea. The Japanese government, which has asked the United States to provide advance consultation if it decides to launch military action against North Korea, has ramped up preparations for unexpected situations.

The Japanese government anticipates the possibility of a joint response with the United States should a contingency arise.

Prime Minister Shinzo Abe stressed on Wednesday that the region is becoming increasingly tense. “[U.S. President Donald Trump] has stated that all options are on the table. It’s a fact tensions are rising,” he said at the Prime Minister’s Office after receiving a written proposal calling for tougher sanctions on North Korea from the Liberal Democratic Party’s Eriko Yamatani, chief of the headquarters for the abduction issue.

“If an unexpected situation occurs, we’ll ask the United States to cooperate in rescuing the abduction victims,” Abe added.

The Trump administration is reviewing U.S. policy toward North Korea and has not ruled out military options, including a preemptive strike. Tensions in the region have risen sharply since the United States carried out a missile attack on Syria on April 6.

During a series of meetings between Japanese and U.S. officials, the Japanese side asked for advance consultation regarding any U.S. military action against North Korea. The U.S. side is said to have responded positively to the request. This is because Japan would need to take appropriate precautions given that, as an ally of Washington, it could be a target for retaliation should the U.S. military attack North Korea.

It is expected that a North Korean attack on Japan would involve ballistic missiles. The Japanese government has been bolstering defensive measures against ballistic missiles, including making permanent in August 2016 an order to the Self-Defence Forces to intercept and destroy incoming missiles.

A difficult issue that would emerge in a contingency on the Korean Peninsula is the rescue and protection of an estimated 57,000 Japanese, including tourists, in South Korea. The government started compiling an evacuation plan in the 1990s and has updated and changed it several times. The government plans to convene a meeting of the four ministers who form the National Security Council to review the strategy for dealing with this issue at an early date.

Security legislation that came into force in March 2016 newly allows the SDF to take steps to protect, rescue and transport Japanese overseas. The Japanese government plans to use government-chartered aircraft and SDF transport vessels for such evacuations, which would be conducted in cooperation with the U.S. military.

“South Korea’s allergy toward the SDF is still strong, so there has not been much progress regarding concrete talks between the Japanese and South Korean governments,” a senior Defence Ministry official told The Yomiuri Shimbun.

The government must also figure out how to cope with the huge number of refugees expected to descend on Japan from the Korean Peninsula. They would need to be temporarily accommodated, but it also is possible that North Korean agents would slip into Japan with the intention of striking nuclear power plants, heavily populated areas and other targets.

Implementing immigration control procedures for those refugees would not be easy.

The SDF is supposed to jointly respond with U.S. forces according to how a contingency on the Korean Peninsula would develop. The Guidelines for Japan-U.S. Defence Cooperation that were revised in April 2015 stipulate the formulation and updating of a joint operation plan.
The U.S. military asked the SDF to provide support during the North Korean nuclear crisis (see below) from 1993 to 1994, such as escorting ships and conducting minesweeping operations. At that time, Japan did not have emergency legislation such as the Law on Response to Armed Attack Situations, and the exercise of the right of collective self-defence was not permitted. Japan had no choice but to refuse the request, according to a former Ground Self-Defence Force general.

However, a senior Defence Ministry official emphasised the difference made by the security legislation, which permit the limited exercise of the right of collective self-defence: “There has been progress regarding Japan-U.S. coordination for role sharing.”

The most realistic SDF activity would be logistics support for the U.S. military. The SDF is permitted to supply ammunition to U.S. forces and refuel ready-to-fly fighter jets, among other measures, in situations that do not constitute an armed attack but are recognised as having an important influence on Japan’s security and safety.

In a situation that could result in Japan sustaining damage equal in seriousness to a direct attack, the government would recognise that the nation’s survival is under threat and permit the use of force by the SDF. Using the right of collective self-defence, it would become possible for the SDF to defend U.S. ships by counterattacking enemies that attacked them, based on the SDF mobilisation order. The SDF could also conduct other operations, including minesweeping in the open sea to remove mines laid by North Korea.

Under such a situation, the government would simultaneously recognise that Japan is at imminent risk of coming under attack while likely starting preparations based on the Civil Protection Law, such as evacuating residents.

■ North Korean nuclear crisis
In 1993, North Korea was suspected of conducting a nuclear development program but refused a special inspection by the International Atomic Energy Agency (IAEA). North Korea then announced its withdrawal from the Treaty on the Non-Proliferation of Nuclear Weapons (NPT), leading the United States to consider military action. In 1994, former U.S. President Jimmy Carter visited North Korea and struck an agreement with then leader Kim Il Sung that allowed the IAEA to continuously monitor North Korea’s nuclear facilities. A crisis was averted and the U.S.-North Korean Agreed Framework was concluded, under which the United States and other countries promised to offer light-water reactors — which are difficult to convert for nuclear weapons purposes — to North Korea in return for a freezing of its nuclear facilities.