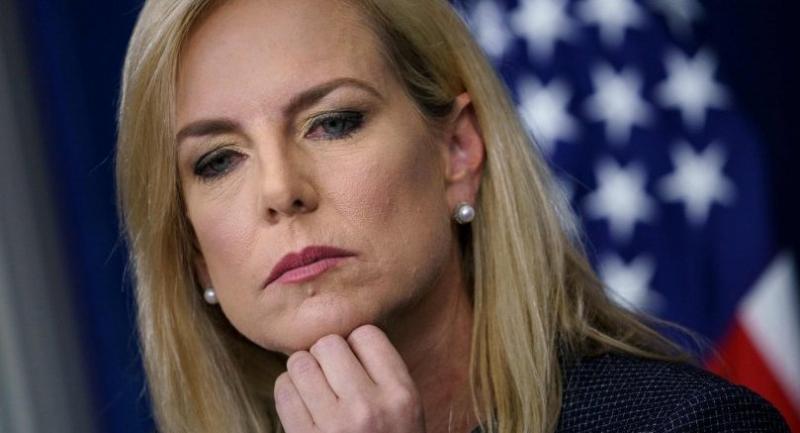 Washington - Protesters heckled US homeland security chief Kirstjen Nielsen as she dined at a Washington restaurant late Tuesday, chanting "shame!" repeatedly at the woman who has become the frontline defender of the Trump administration's widely condemned practice of separating migrant children from their parents.

Activists from Metro DC Democratic Socialists of America confronted Nielsen at MXDC Cocina Mexicana restaurant and attempted to disrupt her dinner while she was surrounded by staff and security.

The organization said police were called and tried to detain the activists "to no avail."

"How can you enjoy a Mexican dinner as you're deporting, imprisoning tens of thousands of people who come here seeking asylum in the United States?" one of the activists cried out in a 10-minute video the group posted on social media.

"We call on you to end family separation and apologize."

Another protester remarked: "In a Mexican restaurant, of all places!"

Nielsen's spokesman Tyler Houlton acknowledged the confrontation, presenting it as "a small group of protesters who share her concern with our current immigration laws that have created a crisis on our southern border."

"The secretary encourages all -- including this group -- who want to see an immigration system that works, that contributes to our economy, that protects our security and that reflects our values to reach out to members of Congress and seek their support to close the terrible immigration loopholes that have made our system a mess," Houlton said in a statement.

"The secretary has been working with members of Congress for months in search of a solution and she will continue to do so this week."

In the video, Nielsen is seen in a corner of the restaurant, her head lowered as the protesters chanted repeatedly "Shame!"

- 'Nothing compared to horrors' -

Margaret McLaughlin, a member of the activist group, said in a statement that "while Secretary Nielsen's dinner may have been ruined, it is nothing compared to the horrors she has inflicted on innocent families."

Defending Nielsen on Twitter, President Donald Trump said she "did a fabulous job yesterday at the press conference explaining security at the border and for our country, while at the same time recommending changes to obsolete & nasty laws, which force family separation. We want 'heart' and security in America!"

Trump's own wife, First Lady Melania Trump, said over the weekend that she hates to see families separated -- although she stopped short of criticizing her husband's policies.

Instead of commenting on the crisis, she took to Twitter on Tuesday to relish in having "enjoyed tea & time together focusing on the ways we can positively impact children" during a visit from Spain's king and queen.

Heartbreaking images and audio of children separated from their parents and crying for their loved ones while being held in chain-link fence cages have shocked and stocked outrage across the political spectrum in the United States and abroad.

There have been growing calls for Nielsen to resign in the face of the immigration crisis and Trump's "zero tolerance" policy.//AFP