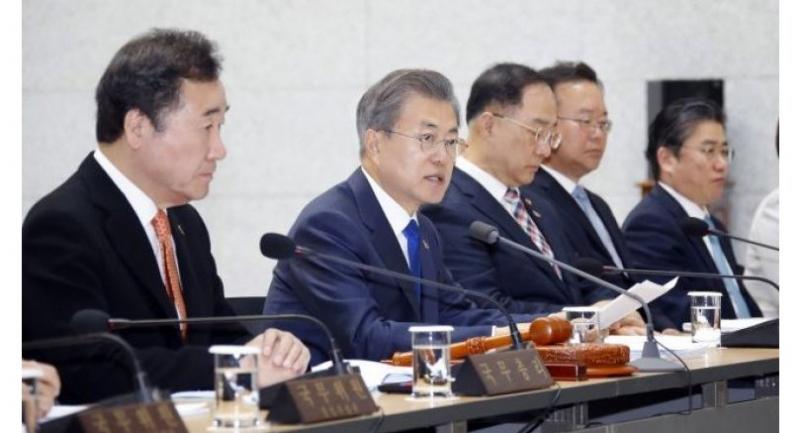 President Moon Jae-in may visit the US in the near future following the US-North Korea summit, Cheong Wa Dae said Tuesday.

“Although President Trump did not specify a date, his saying that (he and Moon) have a lot to talk about raised the idea of a meeting in the near future,” a top Cheong Wa Dae official told reporters Tuesday, referring to Moon’s telephone conversation with US President Donald Trump on Feb. 19.

“If the meeting takes place, President Moon will have to go to Washington.” The official added that the date of a possible Moon-Trump summit could be set during their telephone conversation scheduled for after Trump’s meeting with North Korean leader Kim Jong-un.

Earlier in the day, Moon had expressed high hopes for the second US-North Korea summit. “The international order surrounding the Korean Peninsula is changing. The most important element is that we have become able to lead such changes,” President Moon Jae-in said at a Cabinet meeting.
“The international community highly rates our role in the changes in the Korean Peninsula situation.”
A day earlier, Moon had commented that South Korea must be ready to take the initiative if North Korea opens its economy to the world.
According to Cheong Wa Dae, Trump informed Moon that he would speak with the South Korean leader soon after meeting Kim. Regarding Monday’s comments, Kim Eui-kyeom said that Moon was emphasizing the need to play a leading role in related matters.
The spokesman also downplayed his comments from the previous day regarding the possibility of the US and North Korea declaring an end to the Korean War, saying he was only expressing hopes for such an outcome.
On Monday, Kim Eui-kyeom told reporters that he believes the US and North Korea could agree on declaring the end of the Korean War, saying that such a declaration would be welcome regardless of the form it takes, and that a two-way declaration involving only the US and North Korea would be significant.
The spokesman, however, drew the line at a peace treaty, saying that while declaring the end of the war is a political issue, negotiating a peace treaty would require multiparty talks.