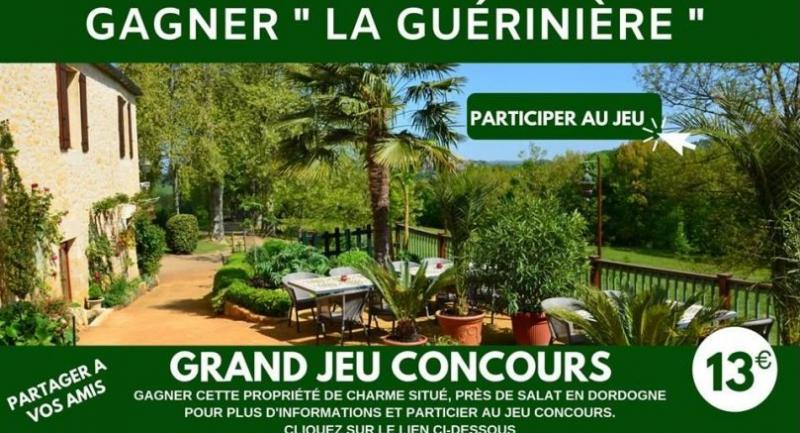 No playing around: French authorities halt game with house as prize

Bordeaux - A French couple hoping to sell their luxurious countryside resort via a quiz has been forced to suspend the competition after France's online gaming authorities stepped in.

Brigitte and Christophe Demassougne originally put their sprawling guest house in Cenac-et-Saint-Julien, around 80 kilometres (50 miles) southeast of Perigueux in the Dordogne region, on the market with an estimated value of more than 1.5 million euros ($1.7 million).
The 18th-century residence, known as a Chartreuse, includes stables, a tennis court and a private pool amid lush gardens.
To drum up wider interest they launched an online quiz offering the resort to the lucky winner. After purchasing a 13-euro ticket, contestants were given two questions and shown three objects whose value they had to estimate.

The not-exactly-brainteasers sought the names of a castle in the northern Perigord region ("Versailles" isn't the correct answer) and the name of the river that runs through the town of Roque-Gageac -- it's the Dordogne.

The objects were trickier: An antique book of calligraphy, a pair of polished Chelsea boots, and a 18-Karat gold bracelet.

Since its launch on April 1, nearly 20,000 people had signed up, raising 260,000 euros, from as far away as Canada and Australia, as well as Britain where holidaymakers have long favoured the Dordogne region, Brigitte Demassougne told AFP.

On Thursday, however, the couple received a letter from the ARJEL online gaming regulator ordering the competition shut down, citing a 2014 law that forbids games of chance based on individual expertise.

It gave the couple eight days to prove the contrary, and although they will try to prove they acted in good faith, Brigitte Demassougne said she was "pessimistic" about her chances.

She promised that all the players would get their money back.

"People called and wrote to congratulate us and support us, saying 'Even if we don't win, you've given us a chance to dream!'" she said. "At least it was good for that."