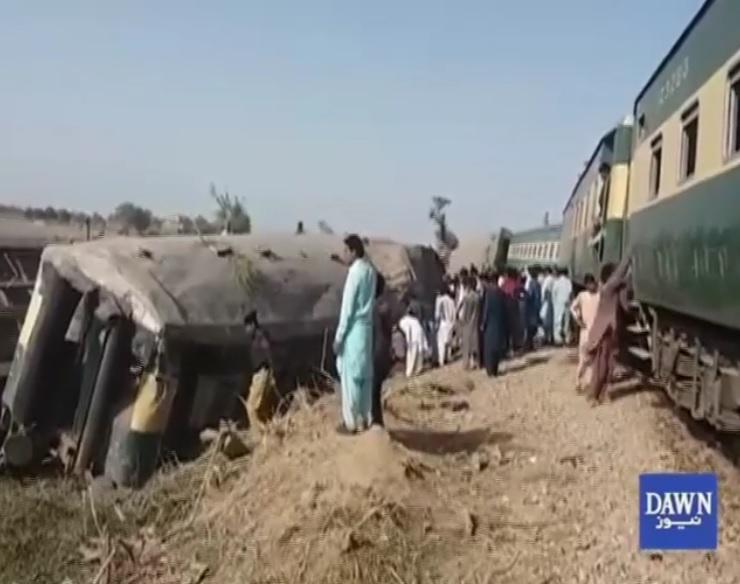 At least 51 people were killed and nearly 100 others injured on Monday after two passenger trains collided near Daharki, a city located in the Ghotki district of upper Sindh, according to officials.

He shared the list of 34 deceased passengers, including men, women and children, who have been identified. "I still fear the toll can still rise as we are tracing a few policemen of the train who are missing," he said.

According to a spokesperson for Pakistan Railways (PR), the accident took place at around 03:30am after a Millat Express train — headed from Karachi to Sargodha — derailed and fell across the "down track". Due to this, it collided with a Sir Syed Express train coming from Rawalpindi, he said, adding that the incident took place near the Raiti railway station.

"The Millat Express train left Daharki station at 03:28am. Information was received at 03:43am that the train had derailed at 03:38am. Meanwhile, the Sir Syed Express train passed through Raiti at 03:38am. As the coaches of the derailed train were infringing the down track, the driver tried to apply emergency brakes but the locomotive hit the infringing coaches at 03:38am," a PR statement said.

The PR spokesperson said a relief train had been dispatched from Rohri while officials, along with police and the local administration, were carrying out rescue efforts. He said that helpline centres have been set up for passengers in Karachi, Sukkur, Faisalabad and Rawalpindi.

He further said that some of the passengers from the Sir Syed Express train have been taken to the Sadiqabad railway station. "Railway traffic would be restored when tracks are cleared," he added.

Both the up- and down-country tracks remained closed throughout the day after the accident. Sukkur division PR superintendent Mian Tariq Latif hoped one of the tracks would be opened by midnight.

SSP Tufail had earlier said: "Thirty eight bodies have been shifted to hospitals and two bodies are being retrieved."

He said that a list is being compiled of the deceased, adding that 25 injured were in critical condition.

In a statement, the Pakistan Railways Directorate said 32 people had died and more than 80 were injured, that a relief train from Sukkur had reached the site. "Pakistan Army troops, police, the district administration and rescue workers took part in the rescue operation," the statement said.

The process of shifting the injured and the deceased to hospitals has been completed, it said, adding that giving medical attention to the injured was of the utmost priority.

Restoring railway traffic is also a priority, it said, adding that officials had reached the scene to investigate the incident. Federal Railways Minister Azam Khan Swati will personally oversee the completion of an initial inquiry, it said.

Earlier today, the minister had visited the site of the incident.

According to reports, the incident has paralysed railway traffic across the country. An information desk has been set up at the Hyderabad railway station for passengers. Railway traffic remains suspended since 2pm on both up- and down-country tracks.

Earlier, Ghotki SSP Umar Tufail said between 15 to 20 passengers were still trapped in the wreckage of the Millat Express train and authorities are trying to arrange heavy machinery to rescue those people who are crying for help.

He said that the death toll is likely to rise as one of the bogies is still stuck in the wreckage. "The Pakistan Railways relief train has not yet reached the spot from Rohri," he said. He feared once this bogie is cleared the number of dead could rise as it is the main bogie in the entire train, adding that 31 bodies had been retrieved from the wreckage.

Ghotki Deputy Commissioner Usman Abdullah said at least 30 people had been killed while 50 others had been injured in the incident. However, officials were facing difficulty in rescuing citizens as the bogies had overturned, he said, adding that the death toll could increase.

Speaking to Geo News, the deputy commissioner said that 13 to 14 bogies had derailed in the incident while six to eight were "completely destroyed". He said that citizens that were still trapped were a "challenge" for rescue officials.

He said that a relief train had departed from Rohri, adding that the local administration and rescue teams were present on the site of the accident. However, the official refused to give a timeframe for the rescue operation.

"This is a challenging task. It will take time to use heavy machinery to free citizens [still trapped]," he said. He said that an emergency had been declared in the district and all doctors and paramedical staff had been put on call.

"We are also establishing a medical camp to provide medical aid to citizens," he said.

Speaking to Dawn.com, an official from chief controller in Karachi said: "It's a tragedy. We can't do anything. The time difference between the departures of the two trains is hardly 10 minutes or so."

The spot where the tragedy occurred is around 6km to 7km short of Punjab province inside Sindh region.

Meanwhile, Sindh Chief Minister Murad Ali Shah has taken notice of the incident and expressed grief over the lives lost. Speaking to the Sukkur Commissioner over the phone, he directed him to mobilise the district administration. "Machinery should be arranged to rescue passengers that are still stuck," he said.

Arrangements should also be made at nearby hospitals to treat those that have been injured, he said. He also directed the official to arrange temporary accommodation and food for the passengers. "An information system should be set up so that citizens can get accurate information," he said.

Prime Minister Imran Khan said he was "shocked by the horrific train accident".

"Have asked the railways minister to reach the site and ensure medical assistance to injured and support for families of the dead. Ordering comprehensive investigation into railway safety faultlines," he said.

In a statement, the Inter-Services Public Relations (ISPR) said that relief and rescue efforts were under way at the site of the collision.

Pakistan Army and Rangers troops have reached the site and are carrying out relief and rescue operation, the military's media affairs wing said. Military doctors and paramedics, along with ambulances moved from Pannu Aqil, have also reached incident site, it added.

"Engineer resources moved to carry out necessary relief and rescue work. Army special Engineer Team Urban Search and Rescue being heli-lifted from Rawalpindi to incident site to speed up relief and rescue efforts," the ISPR said.

Two helicopters are being flown from Multan to evacuate casualties and speedy relief measures, the statement said. "Relief goods [are] being prepared and will be dispatched shortly," the ISPR said.

'Inquiry will determine cause of incident'

PR Chief Executive Officer Nisar Memon said an inquiry into tragedy would determine the cause of the incident. He conceded that the railway tracks in Sukkur division were weak, adding that PR had applied speed restrictions in such spots to ensure passenger safety.

"But this patch of the track is not weak and safety is never compromised," he told Dawn over the phone. He said that when restrictions are applied, the train driver maintains the speed at 40km/h, 60km/h and 80km/h.

He hoped that one of the tracks would be opened for traffic by 6pm as rescue and relief work was underway.

In July 2020, at least 20 people were killed when the Shah Hussain Express train rammed into a coaster near Sheikhupura in Punjab.

Around 30 people were travelling on the coaster from Nankana Sahib to Peshawar, out of whom 13 males and seven females died in the accident. The deceased had included 19 Sikh pilgrims and the driver of the vehicle.

This incident came four months after a bus crossing an unmanned railway crossing near Rohri in Sindh was crushed by the Lahore-bound Pakistan Express train coming from Karachi on February 28, 2020, killing at least 19 people and leaving more than 30 injured.

The year 2019, meanwhile, proved to be one of the worst years for Pakistan Railways and its huge number of passengers as a number of accidents, including the horrible Tezgam fire tragedy in October, exposed wrong decision-making and incompetence allegedly on the part of the management while dealing with the department’s operations.

In a rare and one of the most horrifying tragedies in PR’s history, 74 passengers were killed, with 90 per cent of them burnt alive, and over 40 injured when three coaches of the Rawalpindi-bound Tezgam Express caught fire near Rahim Yar Khan on October 31, 2019.

The Tezgam incident followed after another accident on July 11, 2019, when the Quetta-bound Akbar Express crashed into the back of a goods train at Walhar railway station’s loop line, near Sadiqabad, leaving 21 passengers dead and 85 injured.