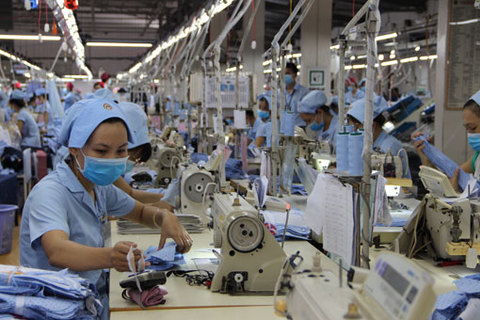 Many firms in HCM City – the countrys largest economic hub – have been forced to shutter operations due to a lack of workers, local media have reported.

According to the Vietnam Textile and Apparel Association (VITAS), the country's textile manufacturing supply chain was only working at 10-15 per cent capacity.

"Thousands of workers have fled the city because of the virus outbreak. Firms will have an enormous problem finding workers to resume their operations once the virus is under control. We anticipate at least 40 per cent of our members will experience a shortage of workers in the near future," said Vu Duc Giang, chairman of VITAS.

The situation is particularly dire in labour-intensive sectors, including footwear and wood processing.

"Even before the pandemic, our members were already having difficulty finding workers. The virus has made it even worse," said Nguyen Chanh Phuong, general secretary of the Handicraft and Wood Industry Association of Ho Chi Minh City.

Wood processing firms have reported a record-breaking number of contracts signed as demand for Vietnamese wood products has soared. Some firms said they would need to operate at full capacity until the end of the first quarter next year to meet demand.

The association said many among some 600 of its members, mostly located in Binh Duong, Dong Nai and Tay Ninh, were badly affected by the virus outbreak in HCM City. Many said they had lost up to 40 per cent of their workers since the virus outbreak.

To make matters worse, many among them were producing essential goods for people in parts of the city that had been put under strict social distancing.

"We simply do not have the manpower required to meet rising demand," said Nguyen Thi Xuan Mai, director of Wepar Environmental Technology - a supplier of potable water and water filter solutions located in Tan Phu District.

"Many of our workers have been stuck in quarantined areas. Many have quit out of fear of being infected at work," she said.

Firms have taken measures to hold on to their workers. Mai said her firm still kept workers who were furloughed on payroll, even if it could only manage to pay a part of their wage.

Female workers with newborns and babies were given small grants. In addition, all workers were made to put on PPE suits at work and had been registered in the local government vaccine priority list.

A Chau - ABC Bakery Co., has moved workers to neighbourhoods near their factories. The condiment maker has also set up living quarters and hired cooks to take care of their meals.

"We must do what we can so workers want to stay with us. Of course, such services cost us extra but it's important to make sure our labour force remains intact for future plans," said Kao Sieu Luc, the firm's director-general.

Some firms even agreed to pay their workers' wages in advance to keep them in the city.

"It's tough for us now but we still can manage. Holding on to our skilled workers is most important to us. Once the virus is under control we can resume production right away. From our perspective, it's way cheaper to spend to support our workers now than to hire and train new workers later," said Ngo Minh Hong, owner of a food processing business in Nha Be District.

"From now until the end of the year, firms in the city will need to fill 150,000 jobs. Sectors whose demand have not yet been severely reduced during the pandemic, including commerce, IT, medicine, textile and footwear, will likely experience a strong bounce back and therefore must recruit additional workers," said a report by the HCM City's Center of Forecasting Manpower Needs and Labour. — VNS