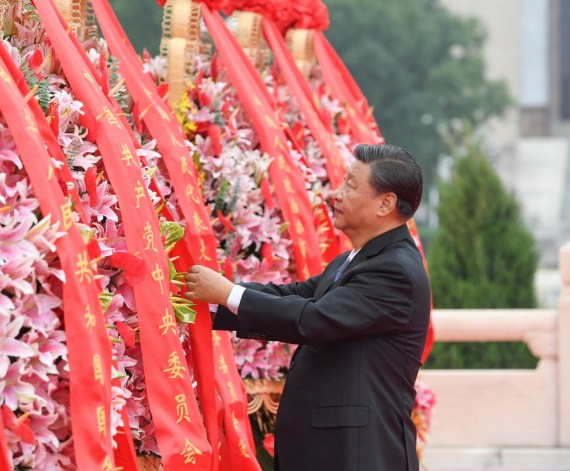 Xi Jinping and other leaders of the Communist Party of China (CPC) and the state attended a ceremony on Thursday morning in Tiananmen Square in central Beijing, offering floral tribute to fallen national heroes.

The event was held to mark China's Martyrs' Day, a day ahead of the National Day.

The other leaders included Li Keqiang, Li Zhanshu, Wang Yang, Wang Huning, Zhao Leji, Han Zheng and Wang Qishan. They were joined by representatives from all walks of life at the ceremony.

At 10 a.m., all participants sang the national anthem, and thereafter paid a silent tribute to those who devoted their lives to the liberation of the Chinese people and the building of the People's Republic of China, which was founded in 1949.

Nine huge flower baskets were placed in front of the Monument to the People's Heroes. Xi and other leaders walked up to the foot of the monument, where he straightened the red ribbons on the baskets before leading other senior officials in a walk around the monument to pay their tributes.

The baskets, with ribbons reading "the heroes of the people shall live forever in our memory," were presented in the name of the CPC Central Committee; the National People's Congress Standing Committee; the State Council; the National Committee of the Chinese People's Political Consultative Conference; the Central Military Commission; non-Communist parties, the All-China Federation of Industry and Commerce, and patriots without party affiliations; people's organizations and people from all walks of life; veterans, retired senior cadres and the relatives of martyrs; and Chinese Young Pioneers.

The year 2021 marks the centenary of the CPC. Since the 18th CPC National Congress in 2012, under the strong leadership of the CPC Central Committee with Xi Jinping at the core, the country has realized its first centenary goal of building a moderately prosperous society in all respects, and has brought absolute poverty to an end.

Today, the Chinese people of all ethnic groups, determined and courageous as ever, are forging ahead with the second centenary goal of fully building a modern socialist China.

Flag-raising ceremony at Tiananmen Square in Beijing on National Day