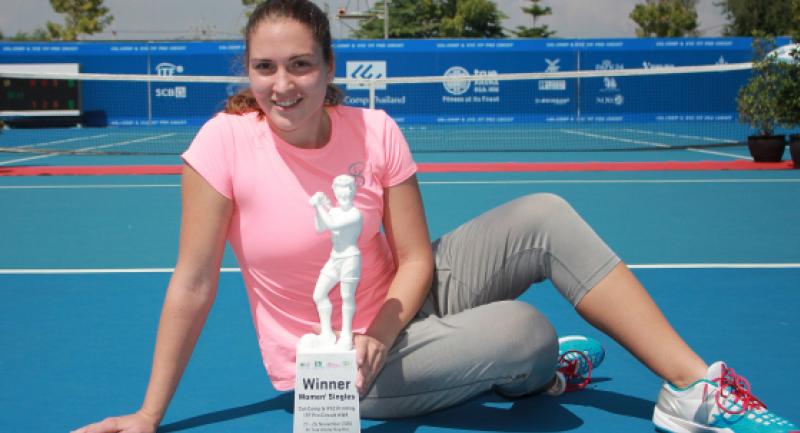 Dzalamidze Too Good for Nudnida in Hua Hin ITF 4 Final.

Ranked 388 th in the world, the Moscow-based bombarded the Thai opponent with heavy groundstrokes and thundering serves to capture her 10 th ITF career title in just 58 minutes.

“I’m so happy and proud of myself as I didn’t expect to win. I just came here to get some matches and got into my game,” said the 23-year-old who never dropped more than seven games in each of her match here.

“I tried to finish points quickly as it’s my style. But I didn’t go for every shot. I tried to play smart and went for the hard ball only when I felt comfortable,” added the Russian whose last win came in Astana in a US$25,000 ITF event.

Dzalamidze got into gear quickly from the start, unleashing powerful groundstrokes to keep Nudnida at bay to build a 5-0 lead in just 15 minutes. The Thai appeared not at herself as she let a string of unforced errors come out of her racquet and surrendered the opener in just 22 minutes.

The big-hitting Russian broke right from the start of the second set before the Thai managed a fight back by intensifying her attack and cutting off unforced errors. But playing three set matches from Tuesday to Thursday  finally took its toll of the Thai veteran who did not have enough left in her tank to counter punch with the powerful foe.

At three all, Nudnida fired a forehand long before the Russian whipped a backhand service return winner to break for 4-3. From then on it was a one way traffic for the top seed.

“I have to admit that my body felt so tired from tough matches since the first round. I haven’t played with a player with this fast speed of ball in a long time,” said Nudnida who jus returned to competition in August after seven months of injury break
“I could have given her a tough match had I been physically better. But I have nothing to regret as I came so far this week,” the Thai added.

Dzalamidze will skip the ITF Circuit 5 in Hua Hin which starts on Monday to play a few more events before the off season. For 2017, she set her sights on taking part in Grand Slams.

“My biggest plan next year is to get into maindraws in Grand Slam doubles and at least being able to play qualifying rounds at Majors too.”