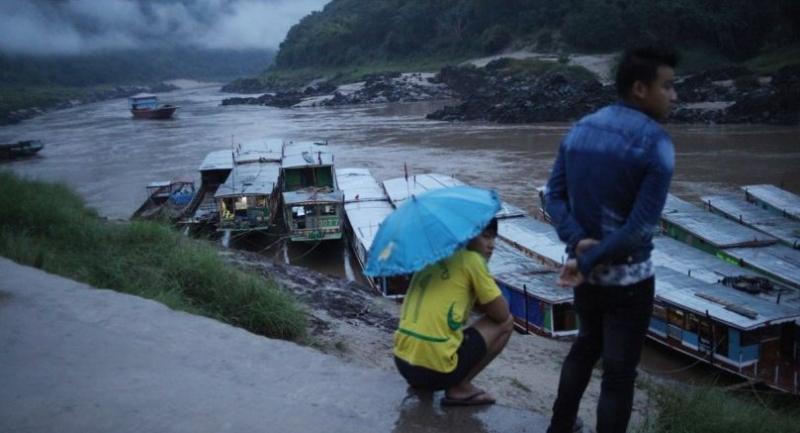 The picturesque scenery and traditional lifestyle along Mekong River of in Luangtong, a small community in Northwest Laos

Despite little consultation, Laos and China forge ahead with the construction of the Pak Beng dam in Northwest Laos

The smiles that once brightened faces in Luangtong, a small community in Laos’ northwest Oudomxay province, have disappeared. These days the residents appear defeated, stunned by the knowledge that before long the land that has sustained them for generations will be submerged under the waters behind Pak Beng Dam.

Perched on the bank of Mekong River, Luangtong, which has around 370 residents according to the deputy village head, is surrounded by steep cliffs and pristine forest. The wooden houses are scattered over the small fertile plain between the mountains and the river and it is here that the villagers grow vegetables and fruit.

An artist's conception of the completed Pak Beng Dam shows it raising the water level upstream to create a vast reservoir from which current will be channelled to drive turbines and generate electricity. Photo/Datang

But the picturesque scenery and traditional lifestyle is about to vanish forever, to be replaced by the reservoir of the new hydroelectric dam to be built a few kilometres downstream by the Lao government, with Chinese investment.

Earlier the month The Nation spent time in the village talking to the locals about their feelings for a dam that will change their way of life forever while bringing them little benefit.

“We don’t want to move from our land. We want to stay here. This has been our home for generations,” said deputy village head Pheb Santitham, 64. A man walks up from the bank carrying food he has gathered by the river. Photo/Visarut Samkham.

“We have all we need here. We have food from our paddy fields, orchards and from the river. We don’t know how to start all over again on new land, and most of the villagers are elderly people or small children.”

Luangtong is a village frozen in time. The residents practise small-scale farming on the riverbank, rear livestock and catch fish from the river to sustain their daily lives. Most of the equipment is handcrafted by the people themselves and electricity is superfluous to their needs.

Promises have, of course, been made. The government has said that all the villagers will be granted comfortable new houses with access to electricity, water and convenient transportation.

But such compensation cannot make up for the loss of the traditional way of life and the ability to be self-sufficient.

“The government promises to compensate us properly, but we’ll have to pay for food in the new community, unlike here, where we can gather food from all around us. When we spend all the money, how will we survive?” Pheb asked.

She explained that the people here, the ones who will feel the impact the most, have not been included in the decision-making process for the development projects. “We have to comply with the policies from above without a chance to argue,” she said angrily. Buntham Seesawad, who’s in his 70s, had similar concerns.

“I don’t want to leave. I heard that the location for our new community is in Hongsa district in Xayabury province, which is very far from here. There’s no access to the Mekong River, and there is no farming area for us,” Buntham said.

“I prefer living in this village, but since it will be underwater and the government is forcing us to relocate, I have no choice but to comply.”

A wholly owned subsidiary of Chinese Datang Overseas Investment, construction company Datang Pak Beng Hydropower states in its report published on the Mekong River Commission’s (MRC) website that all the people affected by the dam construction will be well taken care of.

The report notes that 26 villages in Laos will be impacted by the dam. Residents of six of these will have to be relocated within the area, while those in one village, Luangtong, will have to be resettled a considerable distance away.

Sixty-three affected families in Luangtong will be entitled to the compensation and resettlement scheme, it says. It also emphasises that the principles of public participation in the consultation, planning and design of the new settlement will be protected and a livelihood-restoration plan will be implemented to help the affected people shift from a subsistence arrangement to a market-oriented lifestyle.

The company promises that the new settlement will comfortably accommodate the affected people, providing house plots of 600 square metres and another 200 square metres to plant crops. Affected people choosing not to relocate will receive full compensation in cash and can resettle elsewhere. But, while it might sound goo d on paper, the locals are not convinced. They worry that the resettlement plan is out of date and not all the people will be included. And they could well be right. Pheb explains that the local authorities and the construction company conducted a survey in the village two years ago. Since then, however, some ethnic Khmu-minority families have settled in the village and have not been counted.

One of those newcomer is Jeng, a young Khmu man who settled in Luangtong with his wife and three young children less than two years ago, moving from their mountain home so that the kids could attend school and the family could enjoy a better life.

“I know the government will build a dam and this village will be submerged, but we have no plan to move out. If the water rises, we will just move our home to higher ground,” Jeng said.

Chainarong Sretthachau, a professor at Maha Sarakham University, says the situation in Luangtong is not a problem peculiar to Laos, but also exists in Thailand and all other places where communal rights are not properly respected.

“Many developing countries ignore the communal rights, which is the international standard, and sacrifice the benefits of the minority for the economic benefit of the majority,” Chainarong says.

“This is the wrong way of development, as it can only lead to economic disparity and social injustice.”

He also points out that the Pak Beng Dam will not only affect the residents of the 26 villages alluded to in Datang’s report, but millions of people who depend on the Mekong River for their livelihoods. He urges those with responsibility for the project to reconsider and allow all stakeholders to decide.

The third dam of a proposed 11 on the lower Mekong mainstream, following the Xayaburi and Don Sahong Dams, the Pak Beng hydropower project is a run-of-river dam with a capacity of 912 megawatts. It’s being constructed by Datang and when completed, 90 per cent of the power it generates will be sold to Thailand. The project is now in the Procedures for Notification, Prior Consultation and Agreement (PNPCA) process and construction on the dam itself is slated to start next year. Work on the road access and dam-head facilities is already underway. Construction is scheduled for completion within seven years.

Once completed, the reservoir will be able to hold 780 million cubic metres of water, submerging an area stretching 97 kilometres upstream from the dam, affecting 26 villages in Laos and possibly two villages in Thailand’s Chiang Rai province. Under the current plan, the affected people will have to relocate or resettle by year four or five of the project.

Datang estimates that the total compensation cost for the project will be around US$8.58 billion (Bt302.85 billion).

This is the third story in the Mekong Development Series. The next and final piece explores the future of the Mekong River in the eyes of all the stakeholders.