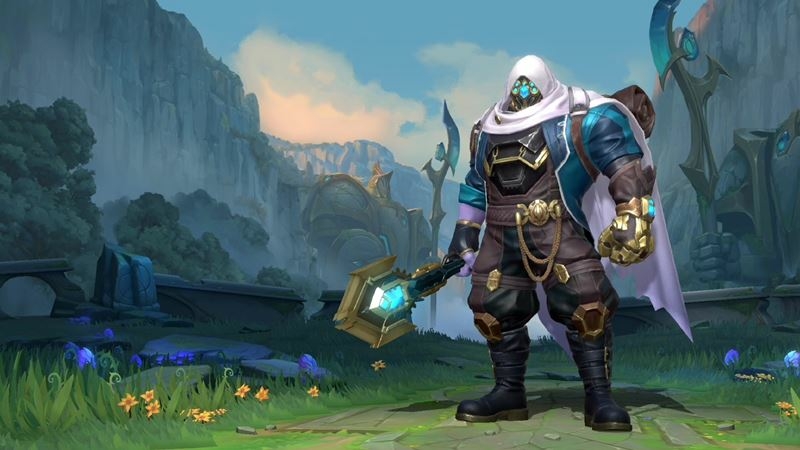 Everything to know about the new mobile game 'League of Legends: Wild Rift'

For years, "League of Legends" has remained on the top of the charts - commanding a robust esports scene, ranking as Twitch's top live-streamed game and attracting 8 million daily players on PC. But try to invite a new player to learn "League of Legends" and they might have a challenging amount of information to absorb or lack the technical specifications on their computer to run the game smoothly.

Parent company Riot Games aims to give new players more chances to learn and play with "League of Legends: Wild Rift" on mobile. It comes out on Apple's iOS platform and Android devices in the Americas on Monday. Riot also has plans to bring the game to console but declined to say when or on which platforms.

"Wild Rift" is also poised to become a mobile esport, with tournaments starting in Southeast Asia and Europe. Riot said it would have more to share on its esports plans by the end of the year. In regions where the game has been released, it's been downloaded nearly 22 million times and reached over $29 million in user spending, according to app analytics firm Sensor Tower.

The multiplayer online battle arena game was rebuilt when it was brought to mobile platforms, a move long awaited by fans. To bring "League of Legends" to mobile, Riot performed a balancing act between appealing to veteran players and attracting new ones.

Key parts of "Wild Rift" remain recognizable for veteran "League" players. The goal is still to destroy the enemy's nexus, and fans will see familiar champion faces, such as the sword-spinning Garen, the frost archer Ashe and gun-slinging bounty hunter Miss Fortune. "Wild Rift" retains its various stages of the game, shortened for mobile: a laning phase where players kill small minions to gain gold and return to home base to buy power-up items; midgame where players begin to roam to kill dragons and towers; and late game, where both teams reach full potential in item builds and learned skills.

Like classic "League," "Wild Rift" has a standard game mode in which teams of five players fight and strategize to destroy each others' bases, a ranked mode for determining one's standing against other players, a mode against bots, and a tutorial mode. A less strategic, more pummeling game mode called All Random, All Mid (ARAM) is slated for a later update.

A lot has changed in "Wild Rift." On PC, Ashe's ultimate skill, an enchanted crystal arrow that stuns and damages the enemy, fires straight ahead in the direction the player selects. On mobile, this arrow can be steered after casting, and even curve toward an enemy to increase the chances that it lands on a target. The map is smaller on mobile and is simpler to navigate. Players can select item builds on their champion select screen to streamline gameplay, and minions will glow when they're ready to be struck by a killing blow to compensate for the game's smaller screen. And all the keyboard and mouse controls were redesigned as touch controls for mobile.

"It's probably easier to think about what didn't change at this point," said game design director Brian Feeney. "Our overall approach was to create an authentic 'League' experience on new platforms, and we knew we had to make some adjustments to the game, the champs, and the controls to really deliver on that promise to players."

Passive skills in "League" on PC, represented by buttons that do not need to be pressed, became a problem on mobile if left unchanged, as players would have "dead buttons" on their screen, so Riot added an active element to passive skills. Champions such as Nasus - nicknamed "Susan" by the League community and resembling the Egyptian god Anubis - that take their time rising in strength had to be adjusted to attain power more quickly, given the shorter game length.

Riot said it does not want to make "Wild Rift" a new game to learn.

"We don't want players to go between 'League' PC and 'Wild Rift' and have to completely relearn how to play against a champion. The last thing we want players to think is: 'Wait, how does this version of Darius work again?' " Feeney said.

Champions from 'League' will be added, with gargoyle Galio coming on April 1, the armor-covered armadillo Rammus slated for April 22 and crocodile-like Renekton on May 12.

Like the PC game, "Wild Rift" has a battle pass and in-game cosmetic skins that cost real money. If players buy the battle pass for about $6, the season's reward is Hexplorer Jax, which looks different from the K/DA popstar skins Riot has popularized and features Jax, a champion who hasn't gotten a lot of new skins. Hexplorer is a new line of skins created for "Wild Rift" by Riot's skins team.

"We used a new skin line to differentiate as we want players to be able to immediately associate a given skin or skin line with the Wild Pass," revenue strategy lead Jeff Cho explained. "If we were to use an existing skin line, there's an increased burden of knowledge on the players to remember which skin from a given set can only be obtained from the Wild Pass."

There's also a new feature "Wild Rift" is introducing called baubles, small items that a player can throw at an opponent in lieu of name-calling. It's part of Riot's experimentation to give players ideally less toxic ways to communicate with their opponents. Baubles could be a slice of pizza or a small tombstone to be dropped on the map that do not serve any other purpose in the game. They'll be sold in the game's shop for real money or can be earned as a free reward for playing games.

The game runs on iPhone 6 Plus and newer, and on Android phones with at least 1.5-GHz processors. Riot said it may work with some controllers but has not been optimized to support all controllers yet. "Wild Rift" is still in a testing open beta phase.

"We're not in a position to declare that 'this is the game' or the promise of 'Wild Rift' has been fully realized," said publishing lead Eric Krause.

The game is also still not available in mainland China or India, but Riot has plans to roll it out in those countries. The Americas is one of the later regions to gain access to Wild Rift, after Europe and Southeast Asia, and rollout to the region has fallen behind the previously announced 2020 launch window. To address this, the Americas are getting a specific in-game event called Wild Welcome to help them catch up on content and earn rewards for playing more games.

Riot's technical operations director, Landon McDowell, attributed the slower rollout in the Americas to "connectivity challenges between the U.S., where a number of our servers are, and where our players are based in Central and South America." Putting up servers everywhere in the world would be spreading resources too thin, said McDowell, and make it "harder to make quality matches." For now, select locations such as Brazil will have servers and better service, while those outside of that area may have weaker connections, while Riot works on building its infrastructure.

McDowell explained that Southeast Asia was focused on first because it would be "the most technically complex and it would help us identify and address most of the issues as we were scaling up other regions."

Between "Wild Rift," the card game "Legends of Runeterra," and an upcoming massively multiplayer online role-playing game set in the "League" world, Riot is starting to build a universe.

An upcoming event in "Wild Rift" called Masters of the Hunt is a nod to "League's" extensive lore surrounding its 150 plus champions. In the event on May 6, void assassin Kha'Zix and his nemesis, a feline creature named Rengar, will hunt and stalk each other, and players get to decide which hunter wins the round.

"We are constantly looking for lore connections when we plan content releases so champions with rivalries or friendships are more likely to be released together and be accompanied with narrative-driven events," said Jenny Liu, events lead. "We found that players enjoy the rich in-universe connections of our champions."