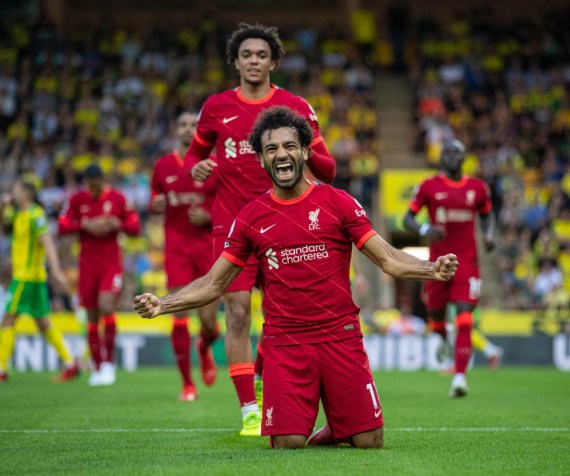 Manchester United, Chelsea and Liverpool all off to highly flying start to the English Premier Leagues new season.

Bruno Fernandes scored a hat-trick as Manchester United sounded out a warning to the Premier League with a 5-1 thrashing of Leeds United.

New signing Raphael Varane was presented to the fans in Old Trafford ahead of the game and United's other new arrival Jadon Sancho was on the bench, so Ole Gunnar Solskjaer's side kicked off with virtually the same starting 11 as last season.

Fernandes put his side ahead in the 30th minute and although Luke Ayling drew Leeds level three minutes after halftime, quickfire goals from Mason Greenwood and Fernandez in the 52nd and 54th minute put United firmly in the driving seat.

Fernandes completed his hat-trick on 60 minutes and Fred made it 5-1 eight minutes later.

There was no record signing Romelu Lukaku for Chelsea, but the European Champions also made their Premier League ambitions clear with a 3-0 win which ruined Patrick Viera's debut as Crystal Palace coach.

Chelsea dominated from start to finish with Marcos Alonso and Christian Pulisic putting them 2-0 up at the break and defender Trevor Chalobah scored his first Premier League goal just before the hour.

Liverpool also showed they mean business as they claimed a 3-0 victory away to Norwich City, with Diogo Jota putting Jurgen Klopp's side ahead on 26 minutes, before Roberto Firmino and Mohamed Salah rounded off a good afternoon for Liverpool, who had Virgil van Dijk back in the side after last season's knee injury.

It was business as usual for veteran striker Jamie Vardy, who scored the only goal of the game to give Leicester City a 1-0 win over Wolves, who had chances but looked blunt in attack.

Everton came back from conceding an Adam Armstrong goal to give Rafael Benitez a winning start at Goodison Park. Richarlison, Abdoulaye Doucoure and Dominc Carvert-Lewin all scored after the break to give Everton a 3-1 victory over Southampton.

Former Southampton striker Danny Ings netted a 97th minute penalty, but it was not enough to save Aston Villa from a 3-2 defeat away to Watford, with the side that has returned to the top-flight taking the points thanks to goals from goals from Emmanuel Bonaventure, Ismaila Sarr and 'Cucho' Hernandez.

Brighton got off to a winning start as goals on 72 and 78 minutes from Neal Maupay and Alex McAlister saw them overturn James Tarkovski's second minute opener for Burnley.

Newly promoted Brentford kicked off the new season in winning style on Friday night as goals in each half from Sergi Canos and Christian Norgaard gave them a 2-0 win over a very disappointing Arsenal.