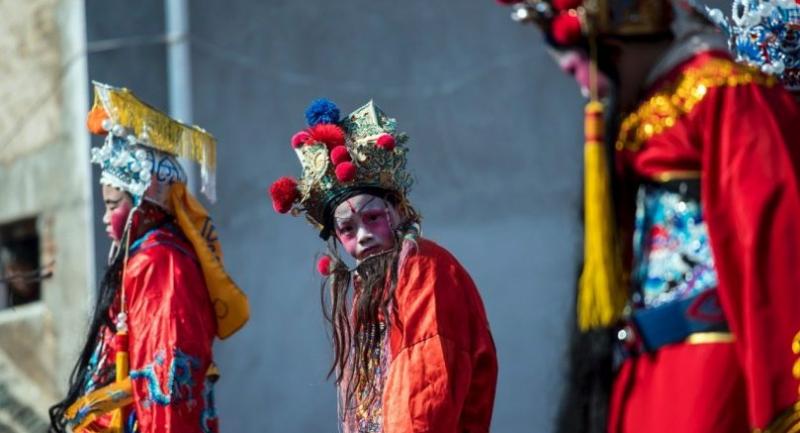 The kids are alright

Villagers glorify their children in a Chinese festival

Looking like living dress-up dolls, elaborately costumed children are paraded through an eastern China village as firecrackers roar, commemorating the end of barbaric child sacrifices hundreds of years ago.
It’s an annual event in the village of Tufang in coastal Fujian province, where China’s Hakka community is concentrated and marks its unique history with a range of colourful festivals.
Nearly 700 years ago, people in the area sacrificed children to ward off local demons.
But a pair of now-legendary figures, Tu Dalang and Lai Balang, left their homes to establish Tufang as a new village free of the barbaric practice.
They are said to have later travelled to mountains deeper in China’s interior where they learnt magic powers they could use to slay demons, eventually returning to Tufang.
The pair are now revered as god-like figures able to influence weather and bestow blessings.
To honour them, Tufang villagers bear palanquins upon which young children stand, arrayed in colourful ancient Chinese dress along with exaggerated make-up and elaborate head-dresses.
Residents set up outdoor tables of incense and candles to welcome them as firecrackers thunder, showering the streets with their shredded red wrappings while security personnel in protective gear stand guard against fires.
The ceremonies accompany the Lantern Festival, which officially |fell this year on February 11, but whose run-up and aftermath are marked by Hakka observances in Fujian.
The Hakka, which means “guest”, are Chinese who speak their own eponymous dialect and have a history as wanderers that has given birth to a number of singular cultural rituals.
A similar observance took place in the Fujian village of Luofang last weekend where 14 children were dressed in traditional attire to |represent the seven dominant local families.
They were carried in pairs – one child on top representing a local hero and another below portraying his bodyguard.
A designated pair occupies the lead spot while the others gently jockeying behind to avoid being- last.
The procession is also intended to represent seven Chinese virtues including loyalty, honesty, mercy and peace.