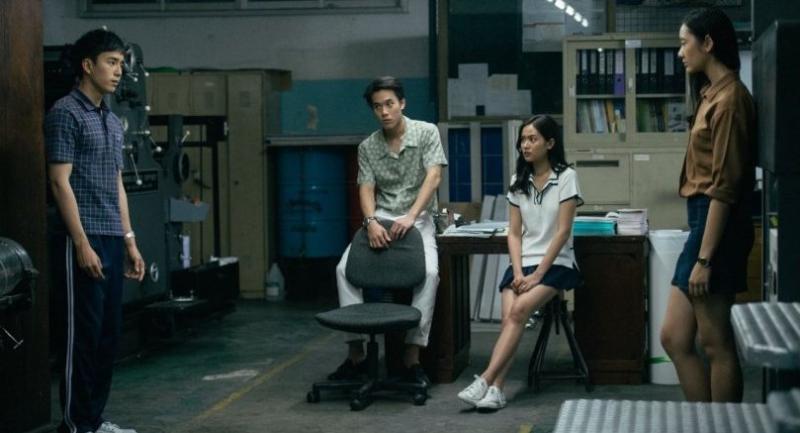 GDH, the studio that rose out of the ashes of Grammy Tai Hub (GTH) has only been in business for just over a year, but it already has a reputation for doing things in style. The film company excelled itself again recently with a press conference for the upcoming film “Chalard Games Gong” (“Baby Genius) that was the most entertaining the media had ever attended.
The press conference took its cue from the movie, which focuses on a group of students involved in cheating in tests. It was held in the new studio at GMM Grammy Building, which was turned into an examination hall for the occasion. The media were all provided with an ID tag and invited to take a test at the desks provided. GDH directors acted as the supervisors, walking between the rows of desks and posturing in such a way as to reveal answer stickers stuck on their bodies, under their arms, on their spectacles and even, more obviously, in the clip showing on the projection screen on the stage.
Directed by Nattawut Poonpiriya, “Bad Genius” is centred on Lynn (Chutimon Chuengcharoensukying), a straight-A student who is making plenty of cash on the side from helping Grace (Eisaya Hosuwan) and rich kid Pat (Teeradon Supapunpinyo) take their tests. Lynn’s business skyrockets and the money starts to flood in as scores of students offer her cold hard cash in exchange for exam answers.
One day, Lynn is offered the opportunity to make millions when Pat and Grace devise a plan for her to take the STIC test, an international standardised test for students wanting to enrol in the world’s leading universities. The test is scheduled to take place on the same date and same time at locations all over the world.
The plan is for Lynn to fly to a country in a time zone that’s ahead of Thailand and then send the answers back to her customers. The only setback is that they need another genius to help them pass on the answers in Thailand and the only person that fits the profile is Bank (Chanon Santinatornkul), Lynn’s scholarship-student rival who staunchly detests cheating of any kind.

The seeds of the idea were planted by producers Jira Malikool and Wanruedee Pongsittisak and Nattawut has developed the story in a way that’s both credible and entertaining.
Cheating on tests is common among Thai students who have different tricks for finding the right answers. These vary from sneaking a peek at their neighbours’ tests and smuggling the answers into the exam venues such as on an eraser or on the palms or their hands. Scheming on this scale for an international test hasn’t been tried by Thai students, though their peers overseas have attempted it, leading to investigations, score cancellations and legal indictments of test prep company managers and teachers.
Nattawut is confident that he has been able to create a situation that the local audience can relate to but makes the point that cheating is only one aspect of the film’s story.
“For me cheating is wrong. It shouldn’t exist even in a school test though most people regard it as a minor aberration that doesn’t harm anyone. I am not pointing a finger to say that it’s right or wrong but attempting to show the audience that cheating come with a price and consequences even you’re young.”
Nattawut swears he never cheated at school. “I was too scared,” he says with a smile before adding that perhaps his family didn’t push him too hard in his studies. “I was not an excellent student, just average, but my parents weren’t determined to make their kids into straight-A students. They were happy with what we were and what we wanted to do.
“We didn’t talk about morals or ethics but I believe that a society should have rules and that people should respect those rules. To me, that seems normal.
The cast, he says, have different personalities and that makes them truer to life while depicting today’s real world of entrepreneurship.
“They are young people who see the opportunity to do business by using their talents and have the ability to sniff out a business opportunity. They weren’t born equally but how they use their assets to make their life better makes for good storytelling,” he says.
The director is full of praise for his young cast and the work they put into their characters. Indeed, he was so impressed that on several occasions he allowed them to improvise.
“They are young but their improvisation threw up many surprises and good ideas that we were later able to develop into the story.”
In addition to the young cast, |the film also heralds the return |of veteran singer, songwriter and actor Thaneth Warakulnukroh, |who has been absent from the big screen for about 30 years. Thaneth plays Lynn’s father and the chemistry between father and daughter is totally credible.
“I accepted the project because of the words said right at the end of the film,” says Thaneth, who also stars in the Singapore-Thai film “Pop Aye”. A popular singer and songwriter, he appeared in several films and TV dramas in the ’90s including the fantasy drama “Thevada Tok Sawan” (“The Fallen Angel”).
Thaneth says that cheating in any circumstances is unacceptable, even in an exam like in the story.
“If you start by something minor like cheating in a school exam, where will it end? Cheating becomes part of life and we don’t feel it’s wrong because everyone is doing it. Cheating is cheating, and we shouldn’t make it acceptable,” he says.
Nattawut, who made his directorial debut with the acclaimed thriller “Countdown”, says he was having fun working on TV and Internet commercials as well as music videos before starting the project two years ago.
Whereas “Countdown” had him shooting partly in New York, “Bad Genius” took him to Sydney, Australia, where the two characters Lynn and Bank head to take the STIC test before sending the answers back to Thailand. “In fact, filming overseas isn’t a lot of fun,” he says.
He adds that while the story fits the caper film genre and shares the same very broad theme as “Ocean Eleven” or “Now You See Mee”, “Bad Genius” should not be seen as a replica of “Perfect Score” or “21”.
“It’s not the same story at all. It’s quite different and ‘Bad Genius’ also has local context that I hope that people can relate to,” he says.
Unlike other GDH directors who mostly graduated from Chulalongkorn University’s Faculty of Communication Arts, Nattawut earned his degree in stage directing at Srinakharinwirot University’s Fine Arts Faculty before going to study graphic design at Pratt Institute in New York.
A confessed movie buff, he says watching thousands of films inspired him to make “Countdown”. The thriller tells the story of three young Thais planning a party at their New York apartment and how their lives became a nightmare when drug dealer Jesus shows up.
“When I was making ‘Countdown’ I believed I didn’t have to spell everything out and that the audience would be able to pick up the story. That wasn’t the case. The experience I earned from ‘Countdown’ and the five years I spent making TV commercials taught me to be more attuned to the audience. So even though ‘Bad Genius’ is a caper, my priority is to entertain people,” he says.
And while filmmaking is considered an art, Nattawut says it is very different from being an artist. “In making a movie we shoulder the expectations of the cast and crew and even the audience, so as a director, I have to balance those expectations and hope we are all happy when watching it,” says the director.
NO CHEATS HERE
“Bad Genius” opens at theatres tomorrow.