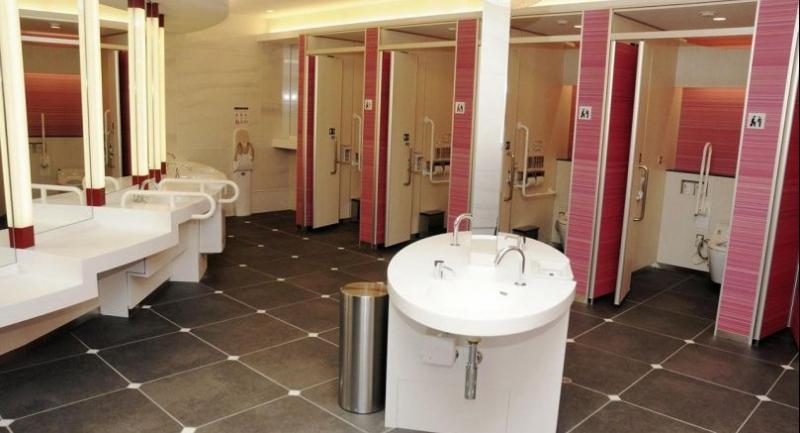 A question of convenience

Narita Airport gets “design restrooms” ahead of Tokyo Olympic Games

RESTROOMS WITH sophisticated interior designs and functionality have been introduced in Narita Airport. These “design restrooms” for both men and women provide users with enough space to store their suitcases in each stall and a wider space for doing makeup. And the interior designs of the existing restrooms have been given a brighter look.
In time for the 2020 Tokyo Olympics and Paralympics, Narita International Airport Corp, the operator of the airport, plans to introduce electronic warm-water bidet toilets with heated seats in 147 restrooms for travellers. They will also include flashing lights for emergencies and voice guidance devices.
NAA plans to renovate 11 especially busy restrooms into design restrooms.
Two of the design restrooms opened in Terminal 2 on August 9, in the international arrival lobby and the duty free and shopping area in the departure lobby.
The design restroom in the arrival lobby has stalls that are large enough for travellers to bring their baggage carts in. Some of the stalls are especially designed for children.

Japan's Narita Airport will have rennovated restrooms for the 2020 Tokyo Olympics. /Japan News-Yomiuri

The stalls in the departure lobby have space for people to bring in products they bought there.
According to NAA, the renovation of the restrooms in Terminal 2 is expected to be completed by September 2018, while work in Terminal 1 and 3 building is to be finished by March 2020.
Airports are not the only places where toilet facilities are being improved.
At some construction sites in Chiba Prefecture, the prefectural government has decided to cover the costs of installing temporary toilets with Western-style seats or flushing functions in order attract women and young people to work in the construction industry. The targets of the assistance system are construction projects ordered by the prefecture whose planned costs exceed 20 million yen (Bt6.09 million). The system applies to construction projects for which bidding is held from August 21.
According to the prefectural government, Japanese-style box-type temporary toilets without a flushing function have normally been used. They are shared by men and women and have a bad smell.
The comfortable temporary toilets were required by the Land, Infrastructure, Transport and Tourism Ministry to meet 11 conditions, including having Western-style seats and flush function, a function preventing back-flow of smell, and a sink with a mirror and a lighting device. The ministry has introduced such toilets in principle at the sites of construction projects that the ministry ordered since October last year.
The prefectural government plans to pay up to 45,000 yen toward each comfortable temporary toilet when a contractor who has accepted an order installs them. If the contractor installs them separately for men and women, the prefectural government covers the costs for up to two toilets at a construction site.