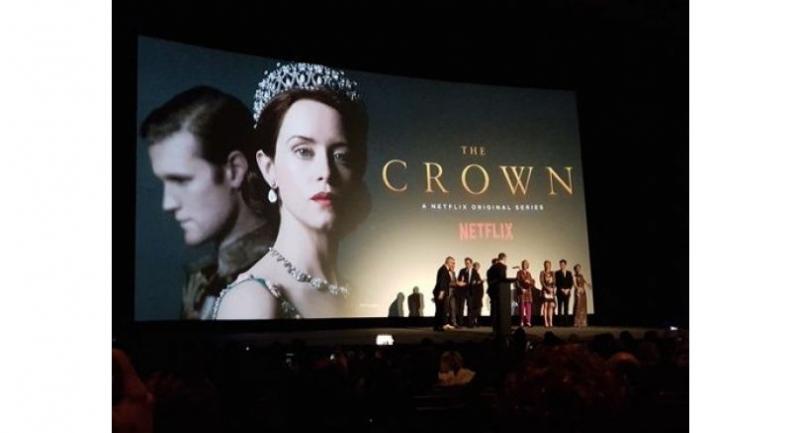 “The Crown” Season 2 premiered last week at the Odeon Leicester Square in London.

With the second series of the British hit drama “The Crown” about to launch, the cast talks the challenges in portraying public figures who are still alive

Perhaps it’s a fascination with royalty or simply a testament to the quality of the productions, but period drama series about royal families are generally a hit with the small-screen watching public.

None though has taken the world quite as much by storm as “The Crown”. Released on Netflix last year, the big budget series from the UK tells the story of Queen Elizabeth II, starting with her marriage to Philip, Duke of Edinburgh in 1947.

The series was an enormous success thanks in part to Claire Foy’s superb portrayal of the monarch, director Stephen Daldry’s efforts to maintain accuracy and the production and costume design that brought the audience into Buckingham Palace of the 1940s. The second season kicks off next Friday and Netflix recently handpicked media from around the world to join the premiere in London and chat with Foy, Matt Smith who plays Prince Philip and Vanessa Kirkby, who portrays the queen’s younger sister Margaret.

Whether by accident of design, the interview took place on the day the royal couple celebrated the 70th anniversary of their marriage, an event they chose to mark in private with close family and friends.

While acknowledging the deep affection the royal couple has for each other, Foy points out that divorce could never have been on the cards.

“She’s the head of the Church of England and in those days the church did not recognise divorced people,” she says.

“It’s about endurance and lasting the course as opposed to any secret ingredient or romantic love,” adds the actress, who won a Golden Globe and an Emmy for her role.

“I think they’ve continued to make each other laugh, which is really important in any relationship. And they stuck with each other through the good and bad times with grace and with humour. Seventy years is a massive achievement for any couple,” says Smith, who plays Prince Philip. The first season offered an overview of the early years of the reign but the second season looks more closely at the couple’s married life while still highlighting the events of that time. These include the Suez crisis in 1956, the night when the Kennedys met with the Queen and Prince Philip at Buckingham Palace in 1961 and the rumours that her uncle, Edward VIII, who abdicated in favour of his younger brother, George VI was a Nazi sympathiser.

In parallel, viewers see the Queen and her husband facing crises in their relationship, their disagreement over raising their son Prince Charles, their arguments at Prince Philip’s apparent love for the wild life and also lifts the veil on the trauma Philip suffered in his family life as a child.

Princess Margaret (Kirkby) plays a more significant role in season 2 – covering her nervous breakdown after not being allowed to marry her lover Group Captain Peter Townsend and her new relationship with photographer Antony Armstrong-Jones (Matthew Goode) whose free-spirited life also adds to the royal scandals.

With the story based on historical fact and many of the characters still alive today, viewers inevitably wonder what is true and what has been fictionalised. “The beauty of human relationships is that you can’t dictate how someone else feels. I think Queen Elizabeth did get hurt by those around her and the experiences made her very strong.”

Kirkby agrees. “I think that’s what the series does so well. It gets behind that public image and allows us a glimpse of the human beings behind these icons of public life and to empathise with them. This is a woman in a really difficult situation. I might have judged her before but now I don’t. I can relate to the reality of her life.”

For his part, Smith says that it’s always difficult playing someone who’s still alive. “But it’s also a great privilege and as I have said before, once you’ve done the research and you’ve explored where they are coming from, you try to do your best,” says the actor who played the eleventh incarnation of Doctor Who is the classic British series of the same name.

“I love her and I think she’s incredible. I think she was a formidable sort of woman, a real-life force – fun, reckless and bold,” says Kirkby of Princess Margaret.

“We received a lot of help from a former royal adviser called Major David. His advice was invaluable. He would say, ‘no, she wouldn’t eat like this’ or ‘she wouldn’t do things that way’.”

Princess Margaret, says Kirkby, was incredibly angry at her sister. “She would let the anger out when she was alone in her bedroom, Princess Margaret wore her feelings on her sleeve and didn’t have much of a filter. The Queen is very different; one of the her best qualities is concealing how she really feels, Margaret just couldn’t do that.”

Foy adds that she worked on the Queen’s character without seeing it as a burden. “I think I realised that they had cast me because they were confident I could play the part so throughout the series I’ve tried not to dwell on it. I’ve tried to trust their decision and just follow my instincts. You can’t try and temper your performance for anybody else because everyone will have their own opinion. In the end, you have to be true to yourself.”

This season will be the final one for the main cast as writer Peter Morgan will bring in new actors to fit the characters as they age. So far, only Olivia Colman has been announced to replace Foy as Queen Elizabeth II for Seasons 3 and 4.

“It’s always hard to leave characters that you have played behind but in this instance, it’s necessary to pass it on to someone else. I feel very lucky to have been the custodian for so long and will now return to the sofa as a fan like I did with Dr Who”,” says Smith with a smile.

Kirkby nods her agreement, saying all the cast had known from the off that they would only play two seasons.

“Ageing actors is always difficult and it breaks the illusion when we all know that they’re not really the age they’re playing,” she says.

For her part, Foy says she’ll always be grateful for the role.

“I was given an opportunity and a responsibility to play a character that required me to do all sorts of things as an actor. I’ve learned a lot about acting and the profession from it. And I’ve made friends for life. It’s been a wonderful experience and I will treasure the memories forever.”