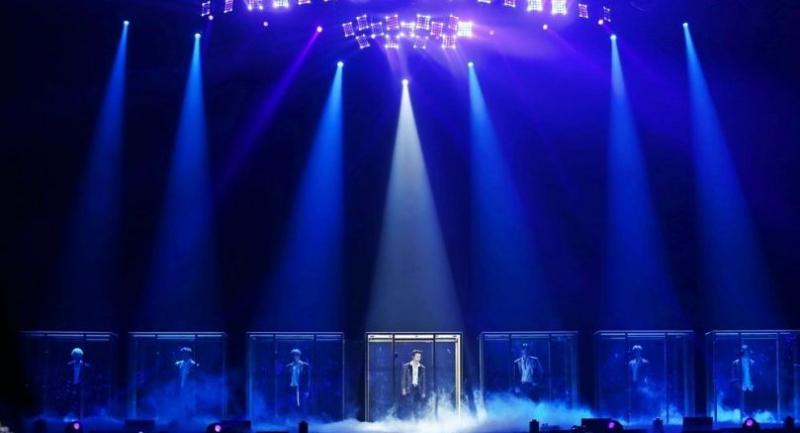 K-POP boy band Super Junior have turned an estimated 10,000 Thais into ELFs (Ever Lasting Friends) since their debut in this country at the 2006 Pattaya Music Festival, and they added another arena-full last Sunday.

Inevitably, “Super Show 7” packed Impact Arena, with tickets sold out within five minutes of going on sale. I had to wonder why they didn’t add a second show, as they’d done in the past, and, sure enough, there were a lot of disappointed ELFs griping on the social media. “What a pity!” one of the boys, Leeteuk, exclaimed during a pre-show interview.

“We’re very grateful to know that so many Thai fans still love us. We always talk about how Thailand was the first country where we performed outside Korea. We love Thailand, especially Donghae, Siwon and Eunhyuk, who were very excited about coming back after they’d finished their mandatory military service.”

Super Junior marked their recent 12th anniversary with the eighth album “Play” and a TV reality show, “SJ Returns – Super Junior Real Comeback Story”, which covered both their past and a world tour. The tour’s name, “Super Show 7”, refers to the fact there are only seven members at the moment – Leeteuk, Heechul, Yesung, Shindong, Eunhyuk, Donghae and Siwon. Ryeowook and Kyuhyun are in the army for a year or two.

Shindong and Eunhyuk pulled double duty as co-producers of the Bangkok concert.

“We decided the stage looked too spacious,” said Eunhyuk. Shindong promised the show, then moments away, would be “full of our stories – and the Thai fans are our main characters, our actresses”. Siwon said the return to Thailand was “like coming back to someone I love. It’s a feeling of excitement I can’t explain in words.”

Heechul said he’d been fretting about pain in his left leg slowing him down during the Thailand show, but he felt fine.

“We’re like princes and all the Thai fans are our princesses,” Leeteuk said.

Tens of thousands of teenage girls and young women can make a hell of a noise when they’re screaming in unison, but Impact Arena somehow withstood the impact as Super Junior hit the stage in black suits and drove into “Black Suit” and “Scene Stealer”.

Those two came from the new album, and the next two, “Mamacita” and “Shirt”, from the 2014 release “Mamacita”.

The lads took turns saying hello in Thai while they admired the signs held up by audience members in response, carrying messages like “Miss you!” and “Not a day goes by that I don’t think of you”. The concert kicked off on one stage at one end of the arena and a pair of catwalks connected it to a second stage in the centre. That’s where the boys headed next, splitting into two groups as they sang the ballads “Girlfriend”, “This is Love”, “Too Late” and “It’s You”, on the last of which Heechul demonstrated his drumming skills.

Then, just as Shindong had said before the show, the story of Super Junior began to unfold. It turned out to be a romance-and-action “mini-series” starring the seven young men, usually relaxing or waxing philosophical between concerts. It began with “The Story of Chandelier”, moved on to an emotional “One More Chance” featuring Donghae on piano, then “Memories” and “Stars Appear”, another tear-jerker.

Laughter replaced weeping when the band transformed into Power Rangers for a set of rousing tracks including “Super Ranger”, “Rokuko”, “Runaway”, “Too Many Beautiful Girls” and “Magic”.

Super Junior never let the momentum come to rest. Siwon played DJ before joining his band mates for a medley of danceable hits such as “On and On” and “Super Duper”, followed by “Sorry Sorry”, “Mr Simple” and “Bonamana”. As if the crowd wasn’t frenzied enough, actual fireworks started going off.

The spotlight illuminated Leeteuk alone as he read a heartfelt statement to the Thai ELFs before the group sang “Marry U”, “I Do”, “The Lucky Ones” and “Shining Star”. “We’re like mobile phones and the fans are our chargers,” Leeteuk said.

Super Junior next performed “Devil” – which reminded me of Pharrell Williams’ “Happy” – and “Spin Up”, before finishing up with “Miracle” from their eponymous debut 2005 album “Twins” as the encore. Up went the signs – “SJ + ELF = Miracle”.

Leeteuk was asked by a fan at one point how Super Junior has thrived for so long.

“It’s because of you, ELFs, with your unchangeable love,” he replied. “It’s been 12 years we’ve had good memories together. Most importantly, we all still keep looking handsome all the time!”