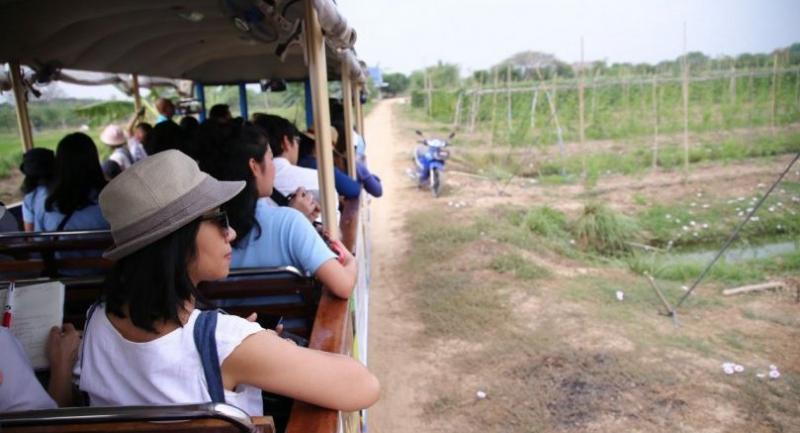 One-day guided tours of the handicraft and agrotourism activities at Sibuathong centre will start next month.

THE SUPPORT Foundation’s Sibuathong centre in Ang Thong province has long been known for creating the intricate masks and exquisite costumes used in the royal khon performances that have been enchanting audiences at the Thailand Cultural Centre for the past 10 years.

Less known is the centre’s role in producing food for our tables. Its integrated farm spread over 720 rai was set up on the instructions of Her Majesty Queen Sirikit following the severe flooding in the province back in 2006 and has been cultivating rice and vegetables as well as raising goats and pigs ever since. One-day guided tours of the handicraft and agro-tourism activities at Sibuathong centre will start next month.

Today, having succeeded in its mission to raise the living standards of local residents in a sustainable way, Sibuathong’s farming project is all set to welcome visitors.

A one-day guided tour of the centre, which is in Ban Yang Klang district, about a two-hour drive from Bangkok, will take place every first and third Saturday of the month starting on April 7. In the morning, visitors will explore the farm and try different activities such as growing and picking organic vegetables and mushrooms, making ice cream from herbal juice and growing rice using what is known as the parachute transplanting technique. The Support Foundation’s Sibuathong centre in Ang Thong province serves as a learning centre for the public with its integrated farm model.

The afternoons will be devoted to visiting the handicraft centre to learn how to make paper and khon masks from khoi (Siamese rough bush), brocade weaving and embroidery, and ceramic production.

“More than half of Ang Thong province was severely affected by the great flood of 2006, but this area remained dry. Her Majesty initiated both the farming project and the craft centre to help her people earn a living and become a good source for chemical-free foods. The farming project is also a model farm and provides knowledge to people at large,” says Vit Junsawang, an official at the Bureau of the Royal Household, during the tour preview last week. Visitors will learn how to cultivate and pick mushrooms.

The best way of seeing the project is by boarding the charabancs that start at 9.30am and come complete with a guide. The open buses run through tracks lined with mamuang bao trees, the small and sour mangoes native to Thailand’s south, as well as khilek (cassod trees). The model farm is certainly abundant, producing everything from jasmine rice and riceberry to salad, pumpkins, mushrooms and assorted vegetables while also raising fish, frogs, goats and pigs. Her Majesty ordered that a plot of 10-rai be set aside for a forested area for the animals and planted more big trees such as the takien (malabar ironwood) and yang na (gurjun-oil tree).

“We have a 11-rai plot for mulberry trees, the fruit of which sells for Bt80 to Bt100 a kilogram. We also produce ready-to-drink juice, jam and ice cream from the fruit. In the space between the trees, we grow indigo plants and these can be picked every three months. Ten kilograms of indigo plants can make a three-kilogram block of indigo dye. This natural dye sells for Bt180 a kilogram and is very much in demand,” says Suwichai Chaithopthong of the Bureau of the Royal Household. Here too visitors can learn how to produce the photosynthetic bacteria that give off effective microorganisms for sustainable, organic farming. The bacteria generate higher yields while reducing the need for chemical fertilisers and increase nitrogen to promote plant growth.

There are more than 20 kinds of vegetables that are ready to pick, among them coriander, Chinese spinach and red and green oak salad. The staff are happy to offer tips on how to grow these and other plants. Seedlings as well as more mature plants can also be picked and taken them home. The farm is an important source of mushrooms including jew’s ear, shiitake and lingzhi (ganoderma) but the highlight is the stunning hed nang nuan (pink oyster mushroom).

“Hed nang nuan is a tropical mushroom, preferring warmer temperatures and high humidity,” says Suwichai. “It grows in clusters or large bouquets. It’s best eaten covered in batter and deep-fried. We sell it for Bt60 a kilogram at the farm and it’s also available from the Support Foundation’s shop at the Or Tor Kor market in Bangkok.” The centre is home to more than 40 varieties of orchids.

And then there are the flowers. The farm cultivates more than 40 species of orchids in spectacular shades ranging from blue, red, orange, white and yellow. The vibrant indigo Vanda Pachara Delight takes pride of place with more than 400 plants, and is flanked by some 100 plants of each variety. They are for sale too, with the small blooms going for just Bt40 and the large ones for Bt120.

Other stars of the centre are the goats, 150 of them, which are bred and raised for their milk. Goats are fed with pangola grass, which helps them to produce quality milk.

“Her Majesty wanted to encourage Thai children to drink more goat’s milk as its benefits are superior to cow milk. It’s easy to digest, rich in nutrition, high in calcium and fatty acids and low in cholesterol. It has fewer allergenic proteins and causes less inflammation,” says Vit.

“We feed these goats with pangola grass as it’s high in fibre and protein and visitors to the farm are welcome to feed them too.” Named after the Chinese city of Jinhua, these piglets are a hit, particularly with young visitors.

“Back in 1999 the Chinese government presented Her Majesty with two pairs of Jinhua pigs and we are currently feeding about 40,” he adds.

The pigs are named after the city of Jinhua in Zhejiang province of eastern China, which is well-known for dry-cured ham. The pigs themselves are mainly white with black on the head and rump and are ready for slaughter at just four months. Sanchai and his frogs

Ten ponds are used for raising frogs, a hybrid of kob jarn and kob naa. “We produce about 100 kilograms of frogs each month and they sell for Bt80 a kilogram. They are normally used for cooking,” says Sanchai Nomkai of the Bureau of the Royal Household. Lunch is served the oldfashioned way – in a tiffin.

Some of the produce visitors admire over the course of the morning is prepared for lunch, which is served, along with dessert, in a pinto (tiffin carrier). Our group tucks into sticky rice wrapped in banana leaves, larb moo (spicy minced pork salad), deep-fried mushrooms, grilled pork with spicy jaew dipping, assorted fresh vegetables and candied banana. We also get to sample mulberry and lemongrass juice, goat’s milk and ice cream made from mulberry and corn. Three skilled artisans prepare to weave the exquisite pha yok to be used in the royal khon performance.

Fortified by this feast, we head to the handicraft centre. Over the past decade, the Support Foundation has created more than 1,000 costumes for the royal khon performances. Many of them have been produced at Sibuathong centre, which specialises in embroidery and exquisite pha yok – brocade with gold and silk threads that dress Sida, one of the main characters in the Ramayana epic.

Pha yok was favoured by royalty and the aristocracy and requires hours of skilled weaving. The gold and red silk thread woven into the fabric gives it its lustrous texture. To produce a 3.5-by-1-metre piece of pha yok requires at least three weavers working the loom and takes about three months to complete. An artisan adds intricate embroidery to the magnificent costumes.

A group of 20 artisans also painstakingly add intricate embroidery to the magnificent costumes.

Back in 2005, when Her Majesty set about organising the revival of khon, one of Thailand’s oldest narrative dance forms, she assembled a research team to discover what the costumes might have looked like in the past. Once this historical evidence had been collected, she selected specialists to design new costumes to fit contemporary body forms and set in motion a series of weaving, embroidery, mask and jewellery-making workshops so that all aspects of khon costumes could be produced. The Sibuathong centre is part of that initiative. The artisans paint the khon masks made from khoi paper.

Another part of the centre is dedicated to khoi (Siamese rough bush), the natural material used for making khon masks and books for monastic precepts. An adjacent pottery facility produces charming ceramics in simple yet stylish designs, all of them made by rolling the clay on hand-powered wheels or through pressure-casting.

Visitors can learn how to build a ceramic ware with hand-powered wheels or have a go at painting a ceramic cup.

A DAY IN THE COUNTRY

The one-day, guided tour will start next month onwards, every first and third Saturday of the month. The fee is Bt799 for adults and Bt599 for children. Children under three get it for free.