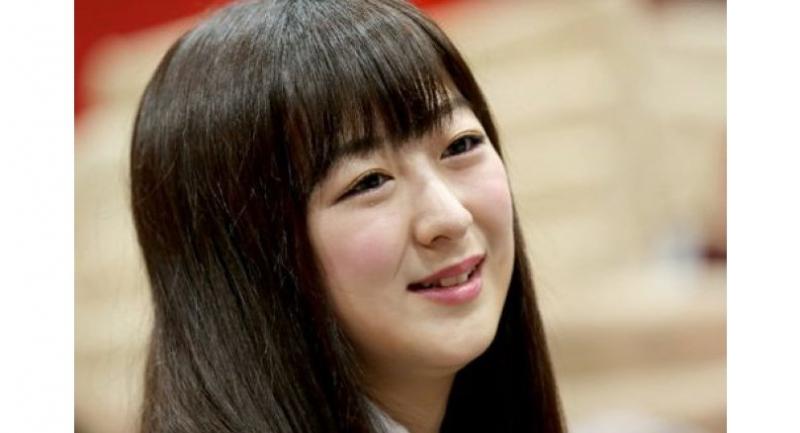 Izuta Rina arrives from Tokyo and the vast roster of AKB48

Izuta Rina – one of three members of the Japanese all-girl supergroup AKB48 who’ve been “transferred” to Thailand’s version of pop idols, BNK48 – doesn’t care for somtam.
The shock of hearing a visitor from overseas say they don’t like somtam is softened, though, when she explains that she doesn’t like papaya, so instead she has somtam khao pod – corn salad.

While other idols from AKB48 are shared out with sister groups elsewhere – such as JKT48 in Jakarta and TPE48 in Taipei – Rina is learning all there is to know about Thainess.
The 23-year-old has been here twice before, for AKB48 concerts.
“Being an idol isn’t a career,” she advises the young women of BNK48. “It’s more of a passion, a dream we’re pursuing. An idol is all about being a character, whereas a girl group focuses on performance and good looks.”
She’s loving her time with BNK48. “Thai fans are louder than Japanese fans!”

Rina is learning the language and wants to take a course. Meanwhile Sawitchaya “Satchan” Kajonrungsilp and Cherprang Areekul from BNK48, who both speak Japanese, are coaching her.
Rina was born in Tokyo’s Saitama district and isn’t concerned that her education ended after high school. Going on to university would be pointless, she says, because she’s already who she wants to be, and her parents are okay with that. She’d like to emulate Watanabe Mayu, a former member of AKB48 who went on to become a solo singer and actress.

Rina auditioned to join the idol group and was made a member of Team B in 2010, then transferred to Team A two years later.
“I think I was qualified enough to be a member of AKB48,” she says. “To be an idol, in addition to singing and dancing talent, you have to be committed and never give up. Everyone develops their uniqueness through their performances. My outstanding characteristic is always having a smile in my heart and a sincere expression.”
It comes as a surprise to hear the girls in AKB48 all taught themselves to sing and dance, unlike the rigidly trained ladies of BNK48.
Asked how many fans she personally has, Rina says she doesn’t know “because AKB48 members don’t have their own fan pages like BNK48 has”.

Who’s her favourite in the group?
“Of all the members, Watanabe Mayu always impressed me most, but from my age group it’s Nakanishi Chiyori, who has habits and a sense of humour similar to mine.”
Rina was chosen to command the spotlight as the “centre” on the song “Reborn”, a track on AKB48’s fourth album, “Koko ga Rhodes da, Koko de Tobe!”
“I really don’t know why I was selected to be the centre for the single, but I think it was because I’m always my natural self.
“It was very exciting being named a centre. The song is about fighting to return to life. As I sing it, I feel like I’m trying to persuade everyone to keep fighting for something better.

“I’m hoping to become one of the senbatsu [the group’s key members] and later I’d like to work on a TV variety show, so my fans always encourage me and say, ‘Fight, fight, Rina!’ Some have even given me omamori, which are amulets sold at shrines, to help me get there.”
Rina says age is an important factor for an idol and she doesn’t think it’s a job for anyone older than 25. She’s 23 now and looking ahead.
“I’d like to be an actress,” she says, but she gets a little shy when asked which actor she’d like to star with. “Yoshizawa Ryo,” she finally admits. “He starred as Okita Sougo, one of the Shinsengumi captains in the liveaction version of ‘Gintama’. He’s very handsome.”