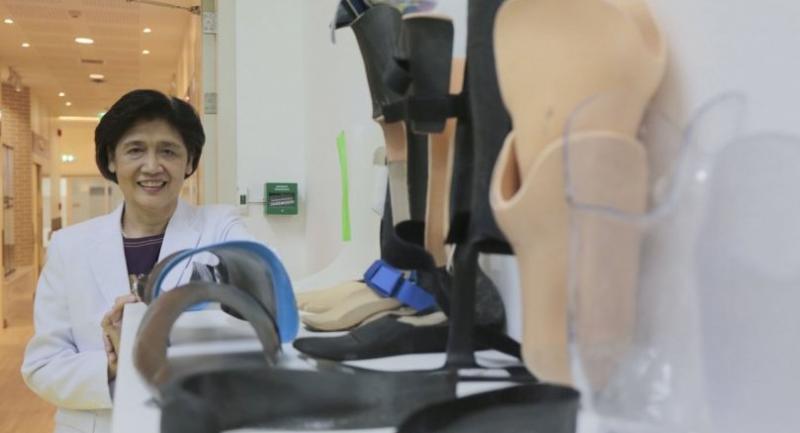 Despite a graduate-level training programme for prosthetists and orthotists, qualified clinical technicians are still in short supply

SITTING JUST across from Siriraj Hospital on the opposite side of the Arun Amarin Bridge, the Sirindhorn School of Prosthetics and Orthotics might just as well be invisible for all the recognition it receives from the general public. Founded in 2002 and part of the hospital’s medical faculty, it is the only facility in Thailand, indeed in Southeast Asia, training the clinicians known as prosthetists and orthotists in the prescription, design and production of customised legs, arms, hands and other limbs.

“We all know medical professions like nurse, physiotherapist and medical technologist, but people look blank when we talk about a prosthetist or orthotist,” says Assoc Prof Dr Nisarat Opartkiattikul, the director of Sirindhorn School of Prosthetics and Orthotics (SSPO). Students from different countries including Japan and Germany practise producing artificial limbs in the school’s lab.

And while she was aware of the disciplines and was long involved in the medical faculty’s education policy, Dr Nisarat, a pathology specialist by training, admits that she knew nothing about the production of prosthetics and orthotics when she assumed the position of school director in 2010.

“I was worried when I was offered the job because I don’t like working in a sector I know nothing about. But I believe that God sent me to do this work. I am happy working here, which is why I have enjoyed such a long tenure,” she says, though she acknowledges it hasn’t been an easy path. Back in 2010, the school was not in good condition and enrolment was low – 16 students for the first year of the course, dropping to just five for the second year.

Dr Nisarat took two years to get a full grasp of her new job, some of it spent visiting prosthetics and orthotics educational facilities at overseas universities and institutions. An accident during a trip to Chiang Mai in which she broke an arm and suffered a spine injury that left her temporarily paralysed in her lower body provided first-hand if unfortunate understanding of the need for such training.

Though it took less than two months for the feeling to return, she came to understand how people felt when left disabled. “I didn’t know when I could get back to normal; it could have been months or even years,” she says.

“I’m happy working here. Even though our job has both lower recognition and lower income compared to other medical-related professionals, seeing our patients able to move around or perform daily tasks with the new limb we have made for them is overwhelming. It’s like we have given them their life back,” she explains.

Prosthetics is a medical speciality that designs and produces an artificial device to replace a missing body part, usually a leg, foot, arm or hand. Orthotics, meanwhile, refers to the making of devices such as braces that are used to modify the structural and functional characteristics of the neuromuscular and skeletal system. While prostheses are often associated with soldiers who have lost limbs in battle, here in Thailand most of the people needing such devices have been left handicapped by road accidents, diabetes, congenital anomalies as well as injuries sustained in the restive south.

Services in prosthetics and orthotics were initiated in Thailand prior to 1960 by the Princess Mother, mother of the late King, who set up a prostheses factory for those who had lost their legs in wars. Lerdsin Hospital assumed the training component, running a three-year course, lower than degree level, for prosthetic and orthotic technicians, which shut down after producing around 170 technicians in 10 cohorts. The Sirindhorn Institution then worked with King Mongkut’s University of Technology North Bangkok on a similar three-year course for four intakes. Sirindhorn School took up the relay by launching a four-year course under the Faculty of Medicine and upgraded it to graduate level by adding anatomy and pathology to prosthetics and orthotics studies.

“Prosthetics and orthotics professionals require not only technical skills for making the artificial limbs but a good knowledge of medicine, engineering, rehabilitation as well as a level of artistic skills to make the right artificial limbs for each patient,” says Dr Nisarat.

As no two amputations are totally alike, each device is customised to the individual patient. The prosthetist or orthotist will design the new limb based on the amputee’s need and lifestyle and taking account of the muscle and tissue remaining, fitting the device so it can be worn without pain or discomfort. Each device incorporates sockets built from hard epoxy or carbon fibre that are softened as necessary through padding around the bone. The Sirindhorn School has two clinics, one on the first floor for those who need an artificial device and wish to pay for it through the universal healthcare system or social security. The Centre of Excellence for Prosthetics and Orthotics on the second floor is for the better heeled and fashions devices from more expensive materials, usually replacing the standard wood and metal with carbon fibre. The clinic also has a service for cosmetic prostheses and podiatry treatment, producing customised insoles or inserts for special shoes.

Prostheses generally last three to five years before a replacement is needed. Prices vary depending on materials, components and design, ranging from thousands of baht for a wooden device to more than Bt1 million for the more sophisticated.

“A prostheses is never 100-per-cent the same as the real limb but it can make all the difference in leading a quasi-normal life. However not everyone gets the type that they want even if they can afford it. We have to consider what is most suitable for them,” Dr Nisarat explains.

For a middle-to-high income country like Thailand, the World Health Organisation recommends 10 prosthetists and orthotists for every one million of population. The kingdom is home to some 69 to 70 million souls, meaning it should have 700. However, in the 16 years since the school opened, just 170 prosthetists and orthotists have been trained and even if the 200 technicians who completed the earlier three-year courses are added in, the shortage is still significant. The leg prosthesis cast is customised for each amputee.

Certified by the International Society for Prosthetics and Orthotics (ISPO) as a Category 1 facility offering a four-year formally structured education leading to a university degree or equivalent and thus recognised for producing qualified prosthetists and orthotists, the SSPO is now attracting students from other countries. “We not only have technicians from around the world enrolling for our course here at the school but also for our tele-study programmes,” says Dr Nisarat.

The students hail from Africa (Malawi, Senegal and Rwanda), Europe (Macedonia and Serbia) as well as from Afghanistan, India and Vietnam and have all undergone three years of technical training with the support of international organisations helping casualties of war. Now, with that support all but finished, the technicians wanting to be fully certified in their chosen profession can do so at the Sirindhorn School.

It’s another story for Thai students. Dr Nisarat admits it’s hard to enrol a higher number as the costs, both in equipment and technology terms, are high. And although the SSPO now has both a Thai and an international curriculum as well as a recognised graduate programme, plans to promote the school as a faculty are still very much in their infancy as the facility requires more lecturers and a PhD programme.

“We need more experience and more time before we can be promoted as a faculty,” says Dr Nisarat.

>> For more information, check out www.SSPO.ac.th.