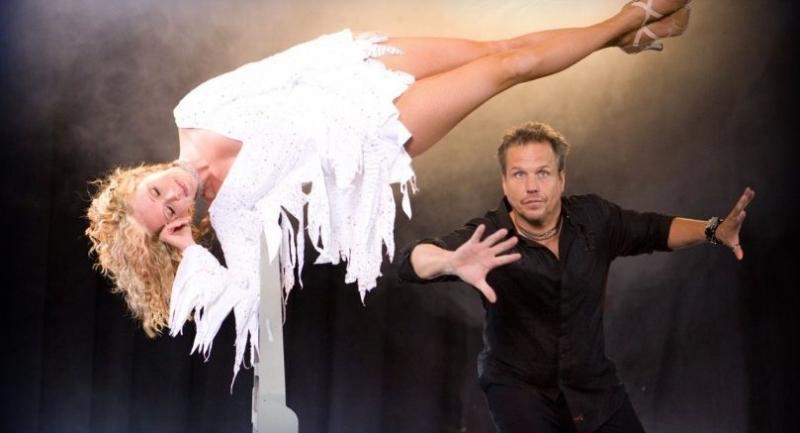 The powerful magic of illusions comes to Bangkok in September

MAGIC will be in the air as the Bangkok’s 20th International Festival of Dance & Music returns to the Thailand Cultural Centre in September as world’s leading magicians and illusionists take to the stage for “The Magnificent Seven”.
Put together by the International Magicians Society of New York, the two performances on September 19 and 20 promise to take the audience into a never-before-experienced fantasy world with astonishing acts designed to thrill both the children and the adults.

The Magnificent Seven are Peter Gossamer and Rocco Silano from the US, Raul Alegria from Spain, Double Fantasy – Vitaliy and Helena Gorbachevsk – who hail from Ukraine, Pole Vlad Kryvonogov, Germany’s Sos and Victoria, and Ariann Black from Canada. The show is produced and directed by Tony Hassini, the founder of the International Magicians Society who is often referred to as a walking encyclopaedia of magic.
Helping create the magic are lighting director Nick Morss, choreographer Maryna Popova and stage manager Mahdi Moammer, himself a professional magician.
Canadian Ariann Black is one of the best female magicians in the world and has staged six successful Las Vegas shows in six different casinos. She’s tailoring a new act just for Bangkok.

Rocco Silano from New Jersey had won all the magic awards in the world by the age of 21 and was the poster boy for every magic publication. He remains the only magician in the world, who can be given any object, and with his bare hands, without help of any secret tools or apparatus, create miracles.
Recently when Silano walked into a restaurant, he was handed a glass of water. Without hesitation, Silano poured the water into his open palm; the water turned into ice cubes (real ice), which he handed back to the waiters – their reaction was worth seeing! Then a woman handed Silano a glass of red wine. Again he poured this into his empty hand and turned the wine into real red grapes.
Silano is preparing some really amazing acts for Bangkok.
From Germany come Sos & Victoria, the quickest change artists in the business. Watching Sos & Victoria is almost like watching the catwalk at a fashion show in Paris or Milan. Their unique style of dancing combined with costume changes that happen in the blink of an eye keep the audience entranced.

Also on the list of greats is Raul Alegria from Barcelona, who has mesmerised audiences all over Europe for the past 10 years. His recent outdoor stunt, where he locked himself into a metal torpedo with two tons of explosives caught the attention of the world. As Alegria attempted (and succeeded) his escape from the explosive-rigged torpedo raised 120 metres above the ocean, the world watched – 20,000 onlookers, and 28 million television viewers. Before Alegria steps on stage in Bangkok, the audience will get to see this video as an introduction. He’ll perform amazing magic, as well as two of his signature illusions. One of them is known as the Bear Trap or The Jaws of Death is absolutely breathtaking.
Polish magician Vlad Kryvonogov’s incredible talent includes comedy magic, sleight of hand, grand illusions, and emceeing. He speaks four languages and is one of the busiest working magicians in the last decade.
His magic has taken him around the world to some of the world’s greatest theatres, such as Winger Garden, Palazzo, Apollo and Hansa Theatre.
From Poland to Atlantic City, USA with Peter Gossamer, also world-renowned for his electrifying performance of magic, dance, and theatre. Considered a pioneer in magic for his original concepts and fresh approaches to the art of illusion, Gossamer promises to stun and mesmerise.

With his main female assistant, Carol-Ann Maccri, Gossamer has created some of the most visual and memorable magic on the stage. In Bangkok, he’ll introduce a new illusion that has never been done before.
Double Fantasy from Kiev will bring the shows to an end. Vitaly Gorbachevski and his wife, Helena, began their careers as acting teachers at the famous Kiev Cirque Acting School and their unique and original magic acts have taken them to theatres and television shows all over the world.
Two years ago, they expanded the act from two people to four people, by bringing in the very talented Vitalii Luzkar and Yulia Tataryntseva. They’ll close the show with their award-winning Dream Vision act.

Seeing Is Believing
Tickets are now on sale at Thai Ticket Major counters, online at www.ThaiTicketMajor.com, and by calling the hotline at (02) 262 3191.
For more information, visit www.BangkokFestivals.com.