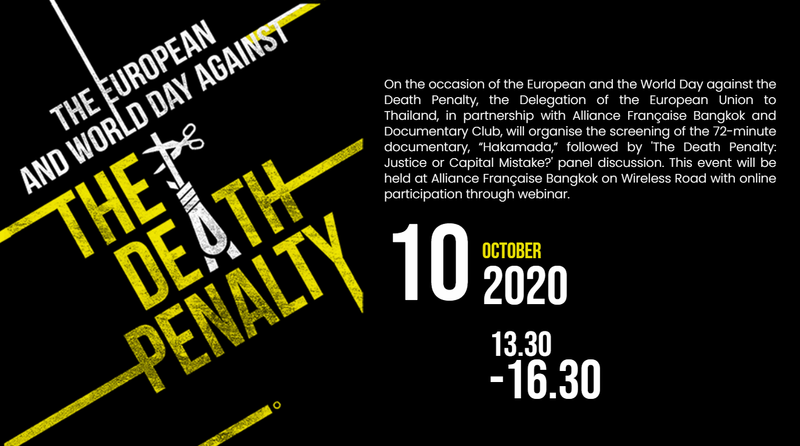 “The EU is firmly opposed to the death penalty in all circumstances. It is a cruel, inhumane and degrading punishment, contrary to the right to life," Ambassador Pirkka Tapiola said. “We encourage countries that still have the death penalty on their books to abolish it. If total abolition remains difficult to achieve, we hope that they will start with putting a moratorium on death sentences and executions.”

The EU is among the world’s strongest opponents of the death penalty. All EU member states are bound by the European Convention on Human Rights, a law governing the protection of human rights and political freedoms across Europe, to respect the right to life and to prohibit the death penalty even in time of war.

Since 1997, the EU remains the world’s largest death penalty-free zone, with a population of almost 450 million spanning its 27 member states. Abolishing the death penalty is a pre-requisite to join the Union and one of the EU’s key foreign policy and human rights priorities abroad.

“We are not trying to preach to other countries out of a sense of superiority. Global trends show that the majority of the world is with us on this issue,” Ambassador Tapiola said.

“Two-thirds of countries in the world have already abolished the death penalty either in law or in practice, and countries that carried out executions in 2019 represented only 10 per cent of the 193 members of the United Nations,” he continued. “Those that move to abolish the death penalty in coming years will then join a global movement to uphold human dignity and every person’s right to life. For me, that is a better way to make the world a safer place to live.”

The EU has been fighting the death penalty through advocacy and diplomatic channels. It encourages countries to adopt the Second Optional Protocol to the International Covenant on Civil and Political Rights, aimed at the abolition of the death penalty.

The EU has also adopted legislation to prohibit trade in goods that can be used for torture or execution, such as barbiturate agents used in lethal injections. In a joint initiative with Argentina and Mongolia, the EU launched the Alliance for Torture-Free Trade in 2017 to expand the ban more widely. In addition to the 27 EU member states, more than 30 countries in Asia-Pacific, Central and South America, including Australia, New Zealand, Chile, and Uruguay, have now joined the alliance.

Every year on October 10, EU delegations around the world also mark the European and World Day Against the Death Penalty. These events are designed to raise public awareness of the EU’s position on capital punishment and stimulate constructive discussion on the need for its abolition.

“Alliance Française Bangkok is honoured to be part of the EU’s efforts to get more people joining a constructive debate on the death penalty,” said Valérie Morvan, the deputy director of the institute. “Apart from the screening of 'Hakamada' on October 10, we will also be showing 'Apprentice', an internationally acclaimed drama by talented Singaporean director Boo Junfeng on Friday. The screening will be followed by a Q&A with producer and screenwriter Raymond Phathanavirangoon. This film will also contribute to the discussion by looking at the death penalty from an executioner's point of view.

“Exploring the question of whether our society needs the death penalty will lead us to other underlying issues in the criminal justice system, which should also be addressed,” said Tida Plitpholkarnpim, founder of Documentary Club. “This issue may be sensitive but it deserves to be discussed openly and rationally.”

“Hakamada” is a 72-minute documentary about the struggle for justice of a Japanese boxer named Iwao Hakamada, who was sentenced to death in 1968 for a quadruple murder he denied committing.

In 2014, a Japanese court granted a retrial in his case due to new evidence, resulting in his release after more than 47 years in jail and 33 years on death row. To date, Hakamada is known as the world’s longest-held death-row prisoner.

The documentary is being shown as it lends strong support to the argument that abolishing the death penalty will prevent wrongful executions due to miscarriage of justice. It also demonstrates that execution is a cruel and inhumane punishment because it does not always deliver the instant, painless death that it was intended to do.

Ethical, moral, and human rights considerations raised by “Hakamada” will be further explored during a panel discussion entitled “The Death Penalty: Justice or Capital Mistake?” Scheduled to immediately follow the documentary, the discussion will challenge the argument that the death penalty is an effective deterrent against violent crimes and explore alternatives to capital punishment that may more effectively prevent recidivism.

This event will also be broadcast live on engage.eu, the website dedicated to promoting the EU’s work in Southeast Asia. Those interested are invited to preregister at https://engage.eu/dp2020/. The documentary is in Japanese and English, with Thai and English subtitles. The panel discussion will be conducted in Thai, with simultaneous English translation.