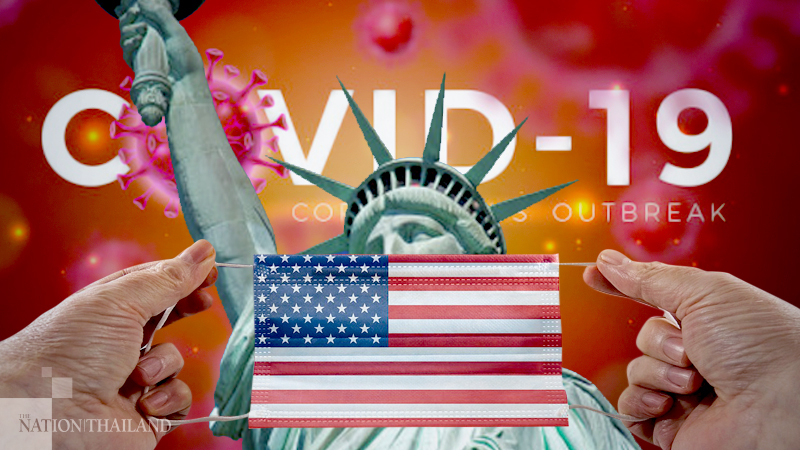 The coronavirus pandemic reached a dire milestone Wednesday when the number of new U.S. infections topped 100,000 a day for the first time, continuing a resurgence that showed no sign of slowing.

The pandemic is roaring across the Midwest and Plains states. Seven states set records for hospitalizations for covid-19, the disease caused by the virus. And Connecticut, Iowa, Maine, Michigan, Minnesota, Nebraska and North Dakota saw jumps of more than 45 percent in their seven-day rolling average of new infections, considered the best measure of the spread of the virus.

The record 104,004 cases was reached a day after the deeply divided nation went to the polls to choose between President Donald Trump and Democratic nominee Joe Biden, an election widely seen as a choice between fully reopening the economy and aggressively quelling the outbreak.

Just as they split almost down the middle on the two candidates, voters broke into almost equal camps on how to address the pandemic that has killed more than 233,000 people and infected nearly 9.5 million people in the United States.

"It's clear we're heading into a period where we're going to see increasing hospitalization and deaths in the U.S. And it worries me how little we're doing about it," said Tom Frieden, director of the Centers for Disease Control and Prevention during the Obama administration. "We know by now how fast this virus can move. You have to get ahead of it."

After more than nine months of restrictions, some state leaders are hesitant to risk further pandemic fatigue, Frieden said.

But if case counts continue rising at the current rate and strong action isn't taken, viral transmission may soon reach a point in some areas where nothing will stop the virus except another shutdown, he said.

"The numbers keep going up, and we're only getting closer and closer to Thanksgiving and Christmas," when some families are expected to congregate indoors and risk spreading the virus further, said Eleanor Murray, an assistant professor of epidemiology at Boston University. "For so many reasons, the next few weeks are going to be bad for us and good for covid."

With Trump and his aides fighting to hold on to the White House, the federal response to the pandemic, which already leaves major responsibilities to the states, may be even more fractured, Murray said.

"Something that deeply worries me is either way this election goes, Trump will still be in charge the next few weeks, when cases are higher than they've ever been," she said. "And he's made clear there will be no top-down, coordinated action coming from the federal government."

Despite months of surveys that clearly indicated strong voter disapproval of the president's response to the pandemic could weigh heavily against his reelection effort, more voters chose the economy as the primary issue in casting their ballots, exit polling showed.

Even if Biden captures the White House, the results appear to signal that, for many people, covid-19 disease is not as daunting as the prospect of being unable to pay their bills or send their children to school.

"I got news for you, pal. Covid-19 is over. It's done," said Nick Arnone, owner of HLSM, a software company for the power sports industry, in Plains, Pa. "We have therapeutics, so deaths are way down; we are very close to a vaccine. We've got to ride it out now.

About 35% of voters said the economy was the most important issue for them, while about 17% cited the pandemic and roughly 2 in 10 were motivated most by racial inequality.

At the same time, however, just over half the voters said it is more important to contain the virus, even if that hurts the economy, while slightly more than 4 in 10 said rebuilding the economy is most critical, even if that impairs work to quell the virus.

Those more concerned with the virus broke heavily for Biden. But they were matched by the proportion of Trump voters who supported his persistent call for a return to normalcy and a revived economy.

In El Paso, Texas, where the pandemic is surging, James Clark said he voted for Biden because of the uncontrolled outbreak.

"Covid was the main reason . . . and the things he was saying specifically about it," Clark said. "I mean there were some things Trump was doing well, too, but overall it was covid."

Some analysts were surprised and concerned that voters appeared to view the decision before them as a choice between the virus and their livelihoods, rather than as intertwined problems that could be solved together.

"That was shocking to me, that Trump could convince so many people it was a choice between the economy and pandemic," said Eric Topol, a cardiologist and head of the Scripps Research Translational Institute in San Diego. "I'm amazed the extent he pulled that off, because it's so obviously a false dichotomy. There's no way for the economy to thrive unless we get control of the pandemic."

On the campaign trail, Biden warned voters of a "dark winter" and invoked empty chairs in homes where families grieved the death of a loved one. He suggested he would follow science and tighten restrictions in places where that was necessary.

Trump repeatedly declared that the country was "rounding the turn" on the pandemic and said a vaccine was almost ready to be distributed. "You know what we want? We want normal," Trump said this past weekend in Butler, Pa.

The two political messages were consistent with the viewpoints of each candidate's base, said Kathleen Hall Jamieson, director of the Annenberg Public Policy Center at the University of Pennsylvania.

Biden has much more support among urban voters and people of color who, until recently, have been hit harder by the pandemic. Trump's base is more White and rural, constituencies that have been slammed by the virus only in recent weeks, as the number of infections soared in the Upper Midwest and Plains states, she said.

"Who's more likely to know someone's who's died? People who are already more likely to be Democrats than Republicans," Jamieson said. "The lived experience of the two constituencies, the base vote for each side, is different."

In Florida, which Trump carried more easily than expected, Biden's emphasis on the pandemic hampered grass-roots campaigning, said Susan MacManus, an emerita professor of political science at the University of South Florida. With Biden emphasizing social distancing, the Democratic campaign there followed his lead.

"The Republicans never let their foot off the pedal in terms of continuing to register [voters] and going door to door, all through the covid," she said. "The Democrats, once covid hit, they made a conscious effort, not going door to door."

Rep. Donna Shalala, D-Fla., who appeared to be headed to losing her seat to television newscaster Maria Elvira Salazar, a Republican, in Miami, campaigned heavily on Trump's response to the virus.

"This is a terrible virus. But empathy for all the folks who have lost their jobs and lost their opportunities and kids who are out of school - I just never felt that message of empathy come across at all," Baral said.

When some people heard Biden talk about the dark winter ahead, they thought, "The first thing he's going to do is close my business," Baral said.

Voters also had to make up their minds amid a torrent of misinformation and purposeful distortion about the pandemic, said Matthew Seeger, a risk communication expert at Wayne State University, who helped the CDC develop its past communications plans.

"The messaging around the pandemic has been deliberately confused and strategically manipulated to downplay its significance," Seeger said. "You combine that with the fact that this is a slow-moving crisis with risk fatigue starting to settle in, and you can see why public perception is what it is."

In Chandler, Ariz., a suburb southeast of Phoenix last week, Al Fandick said he considers the pandemic wildly overblown and masks largely pointless. Fandick, 53, who runs a transport company, said he found it absurd that he was required to don a mask to enter a restaurant but could remove the face covering once he sat down.

"Having a face mask on while I walk into that restaurant, but then I can take that face mask off, that's like having a peeing section in a pool," Fandick said.

Aside from trips to visit people in the hospital, he never wore a mask until Maricopa County began mandating it for public spaces, a policy he vehemently opposes, he said.

On the other side of the gulf are those who see the accelerating pandemic and a possibly very deadly period ahead.

"It is demoralizing to feel like: Here we are in November. A third surge is not just underway, but has already surpassed past surges. And people still don't understand what's happening and what's at stake," Murray, of Boston University, said.

"We are in the middle of an emergency. We have cases higher than they have ever been since this pandemic started, and yet you will have people paying less attention than ever to covid," Murray said. "We as a country are not in a place right now where it's safe to do that."