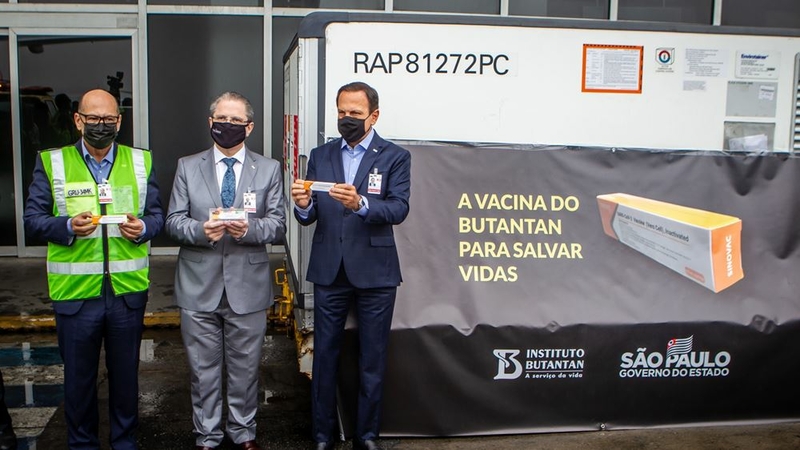 The experimental vaccine developed by China's Sinovac Biotech was shown to be 78% effective against covid-19 in late-stage Brazil trials, the most definitive result so far on the shot's efficacy after previous data sparked confusion and doubt.

The protection rate, which was reported by newspaper Folha de Sao Paulo on Thursday and confirmed by Sao Paulo state officials, was derived from Sinovac's most advanced phase III trials in Brazil, involving about 13,000 participants. The number is below the near 95% effectiveness seen in the mRNA vaccines developed by Pfizer and Moderna.

Sao Paulo Governor Joao Doria is attempting to move quickly while the central government delays presenting concrete vaccination dates. Almost 11 million doses of Sinovac's vaccine, called CoronaVac, have already been shipped to the country. Doria, a political rival of Brazil President Jair Bolsonaro, plans to obtain swift approval and begin vaccinating the state of some 45 million people on Jan. 25. Pressure from other governors led the health ministry to include the shot, which has been publicly shunned by Bolsonaro, to the country's vaccination plans.

Conflicting and incomplete information from Sinovac's trials last month created confusion over exactly how effective its shot is in protecting people sickened by the novel coronavirus. Researchers in Brazil delayed releasing complete data on the so-called CoronaVac shot in late December, saying only that it was found to be more than 50% effective. Sao Paulo state Health Secretary Jean Gorinchteyn later said the vaccine "didn't reach 90%" efficacy. Further confusing matters, Turkey said its trial showed an estimated efficacy rate of 91.25%, though that was based on only 29 cases.

The release of more definitive data on the vaccine's efficacy was delayed because the Beijing-based vaccine developer needed to reconcile results from different trials using varying protocols, according to a person familiar with the matter.

While Sinovac's disclosure now provides a clear picture of its vaccine's efficacy and should shore up confidence in countries where it has inked supply deals like Indonesia and Brazil, Chinese developers's lack of timely and clear disclosures have contributed to a lack of trust in their shots.

China has already administered more than 4.5 million doses under emergency use authorization, and is aiming to inoculate 50 million people against the virus by early February, ahead of the annual Lunar New Year holiday.

Both Sinovac and state-owned developer China National Biotec Group Co., whose shot last week became the country's first to be approved for general public, have seen conflicting data disclosed on their vaccines. CNBG said its vaccine is effective in preventing covid-19 in 79.3% of people, less than the 86% reported earlier from its trials in the United Arab Emirates.

Sinovac can make more than 600 million doses a year at its production facilities in China. The company has orders from countries involved in vaccine trials, including Brazil, Turkey and Indonesia, and will also supply Singapore and Hong Kong in addition to the Chinese mainland.Sinovac and CNBG's inactivated vaccines use a killed version of the coronavirus to stimulate the body's immune response. They can be stored at refrigerated temperature (2 to 8 degrees Celsius), making them potentially better choices for distribution and use in the developing world than the mRNA vaccines from Pfizer and Moderna that require deep freezing.