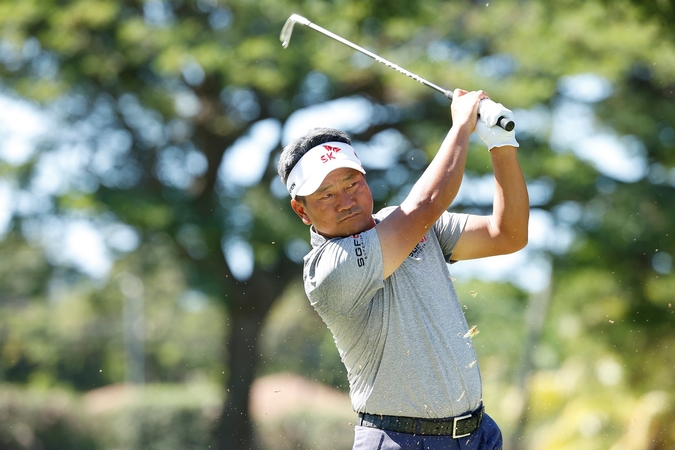 ​​​​​​​Korean veteran star K.J. Choi was last in the field for driving distance average at the Farmers Insurance Open on Thursday but it did not deter him from showing up on the leaderboard.

The 50-year-old Choi turned back the clock by shooting a bogey-free 6-under 66 in the first round at Torrey Pines North Course to share fourth place and lie two behind co-leaders Patrick Reed and Alex Noren.

The 156-man field will each play the opening two rounds on the North and South Course behind the 36-hole cut is made and Choi, an eight-time winner on the PGA TOUR, was certainly a cut above with his straight shooting game.

He averaged only 258.5 yards from off the tee, more than 10 yards behind the next-lowest average in the field (269 yards/Denny McCarthy, Tim Wilkinson) but his accuracy and consistent iron play ensured he hit 10 fairways and 15 greens in regulation, which helped him snare birdies on Hole Nos. 4, 6, 7, 10, 13 and 17.

“The course renovation of the North Course now has more narrow fairways and seems longer with harder greens. My focus today was to keep it in the fairway and I am hitting high cuts and it was good. When I’m on the fairway, I can then make a putt. I made a putt of over 30 feet early and I said let’s keep going. So today is lucky, 6-under is a very good start,” said Choi, whose last TOUR victory was the 2011 PLAYERS Championship.

Since hitting the half century mark last May, he now splits his time competing against the young guns on the PGA TOUR and the over-50s on PGA TOUR Champions. A return to the Farmers Insurance Open also brings back some good memories as Choi enjoyed two runner-up finishes here in 2014 and 2016 but has missed the cut in his last three starts at Torrey Pines, which will also host the U.S. Open in June.

Choi is happy to go toe-to-toe with the new generation of stars on the PGA TOUR, even though they have him on their rear mirrors with his relatively short driving. But he is contented to live up to the adage of “Drive for show and putt for dough.”

“A little different the course setup. On the PGA TOUR, I put more focus on the fairway, don't

miss the fairway. And then younger player is more exciting, competition is high. Champions Tour is not easy either. Top 12, 13 guys are very strong and make putts and everything. I'm on my last chance on the PGA TOUR in 2021 and (if I’m ranked) over 125th in the FedExCup, I'm trying next year on the Champions Tour,” said Choi.

Weather: Partly cloudy. High of 59. Wind SSW 6-12 mph. Due to anticipated rain on Friday and the tournament using a two-course format in the first two rounds, preferred lies were in use during the first round.