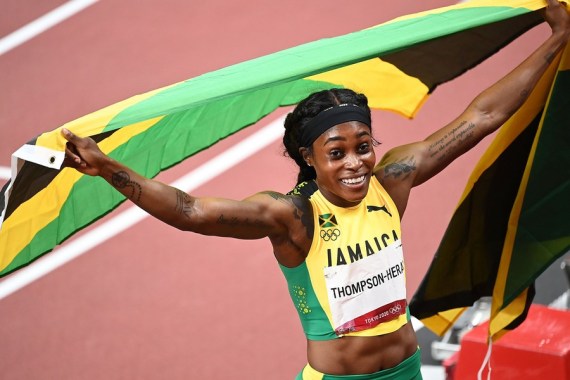 With 32 golds, 21 silvers and 16 bronzes in total, China still sits atop the medal tally and exceeds the gains in Rio.

Jamaican sprinter Elaine Thompson-Herah completed a golden double of the 100m and 200m races at the Tokyo Olympic Games on Tuesday, as China claimed three gold medals to equal its second best record at an overseas Olympics.

China now sits atop the medal tally with 32 golds, 21 silvers and 16 bronzes, matching its gold tally at the Athens 2004 Games. With still five days to go, the Chinese stand a chance to close in on their previous best haul - 38 golds from London 2012.

The United States ranks second with 24 gold and 73 medals overall. Host Japan has 19 gold and a total of 36 medals.

"It's amazing that I have ever seen this day that I could complete another double. I can't believe it," said a high-spirited Thompson-Herah, who won the 100m gold on Sunday.

China won its fifth gold in diving when Xie Siyi and Wang Zongyuan made a Chinese 1-2 finish in the men's 3m springboard. Xie finished first with 558.75 points, followed by Wang at 534.90 points.

Competing in his first Olympics, Xie burst into tears after his final dive.

"For me, so many things have taken place before I came here," said the 25-year-old.

"I had to make a psychological adjustment in a short time, whether in training or competing. The fact that I've had many injuries along the way is also a factor. At that moment, I felt like all the stress and burden I was carrying has been relieved."

Xie was the first current world champion in the event to win Olympic gold since 1988.

After paring up with Wang for the gold in 3m springboard synchronised on July 28, Xie became the first male diver to win both individual and synchronised events at the same Olympic Games since China's Xiong Ni in 2000.

China has won this event in five of the past six Olympic Games, except the gold in 2012 won by Russia.

23-year-old Zou, who placed first in the qualification, received an unparalleled 9.333 in execution score in the final, securing the second gymnastics gold for China in Tokyo.

China's You Hao, the silver medalist in the rings final, finished fourth in 15.466 points.

"I actually never expected that I would get a medal. My coach said, 'this is your first time in the Olympics and no one knows you so just go in and do your best,'" said Guan.

U.S. gymnastics superstar Simone Biles, who dramatically withdrew during the women's team final last week and was struggling with "twisties," finally returned and won bronze on the beam.

"The only reason I could do beam was because there was no twisting, so thank god for that," explained Biles.

"It was just coming off, we weren't sure what we were going to do or to compete in the final because I had to pull out of all the other finals because of that reason," she added.

Coming into the race as the favorite after breaking the 29-year-old world record a month ago, Warholm crossed the finishing line first and lowered his own world record of 46.70 seconds by 0.76 seconds.

The German cyclists covered the 4,000m distance in four minutes and 04.242 seconds, shattering the previous world and Olympic record of 4:06.159 set by themselves in the heat earlier on Tuesday, beating Britain to the second place in 4:10.607.

In men's football, Brazil advanced to the final for the third straight time after seeing off Mexico through a penalty shoot-out. Spain scored an extra-time winner to beat host Japan 1-0 in the other semifinal.

Georgian shot putter Benik Abramyan has been provisionally suspended from the Tokyo Olympics after returning a positive doping test, according to the International Testing Agency.

Abramyan tested positive for dehydrochloromethyl-testosterone and metandienone, and tamoxifen in an out-of-competition sample conducted on July 31, his 36th birthday.

He was barred from the shot put qualifying but has the right to request the testing of his B-sample and appeal to the Court of Arbitration for Sport.

Xie Siyi (Rear) and Wang Zongyuan of China hug each other after the men's 3m springboard final of diving at the Tokyo 2020 Olympic Games in Tokyo, Japan, Aug. 3, 2021.

Zou Jingyuan of China poses for photos during the awarding ceremony for the artistic gymnastics men's parallel bars final at the Tokyo 2020 Olympic Games in Tokyo, Japan, Aug. 3, 2021.

(From L to R) Silver medalist Rai Benjamin of the United States, gold medalist Karsten Warholm of Norway and bronze medalist Alison dos Santos of Brazil pose for a photo on the awarding ceremony of the men's 400m hurdles at the Tokyo 2020 Olympic Games in Tokyo, Japan, Aug. 3, 2021.