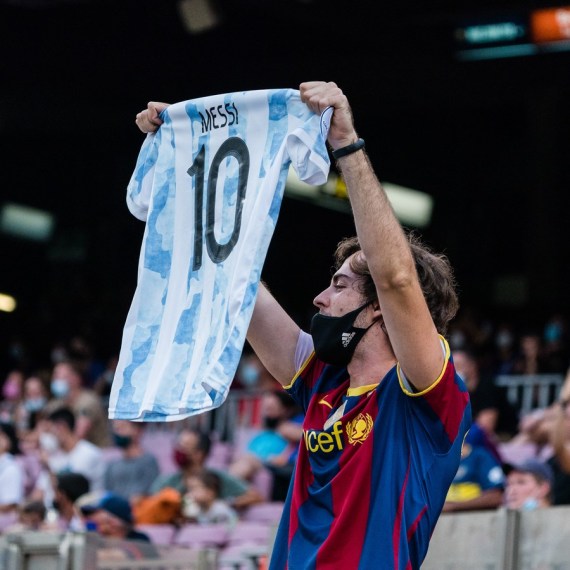 Barca show there is life without Messi, while Atletico, Real Madrid both win in Spain

FC Barcelona started their La Liga season with a 4-2 win over Real Sociedad on Sunday, showing there is life without Lionel Messi.

FC Barcelona showed there is life without Messi as they kicked off their season with a 4-2 win at home to Real Sociedad on Sunday.

Martin Braithwaite scored twice for Barca after Gerard Pique had put them ahead with a header from a free-kick, and with Memphis Depay involved in two of Barca's goals, Sergio Busquets, Pedri and Frenkie de Jong impressive in midfield and Eric Garcia confident in defense, the home side looked to be cruising.

Two goals in the 81st and 83rd minute from debutant Julen Lobete, who was making his debut for Real Sociedad, and Mikel Oyarzabal gave Real Sociedad a lifeline, but Sergi Roberto popped up at the far post to assure the points for Barca after a pass from Braithwaite.

Angel Correa scored twice to get Atletico Madrid's title defense off to a winning start with a 2-1 win on their difficult visit to Celta Vigo.

Atletico showed their typical defensive toughness and Correa, who scored the goal that won the title for the club at the end of last season, opened the scoring in the first half.

Celta equalized from the penalty spot after Marcos Llorente handled in the Atletico area, but Correa was sharp once again to net the decisive goal after a pass from Koke.

Aspas had a great chance to equalize but incredibly put the ball wide in the closing minutes after taking the ball past Atletico keeper Jan Oblak.

Thanks to a brace from new Argentine recruit Erik Lamela, Sevilla beat Rayo Vallecano 3-0 late on Sunday night. Moroccan international Youssef En-Nesyri scored a first-half penalty for the home side.

Real Madrid got off to a winning start with two goals from Karim Benzema, a header from defender Nacho Fernandez and a late goal from Vinicius Jr giving them a 4-1 win away to Alaves on Saturday night.

Benzema and Luka Modric were the star performers for Real Madrid, while both Gareth Bale and Eden Hazard were in Carlo Ancelotti's starting 11.

Saturday's three other games all ended in draws with Wu Lei playing 63 minutes as Espanyol returning to LaLiga with a 0-0 draw away to Osasuna.

Mallorca also returned to La Liga with a point as they drew 1-1 at home to Betis with an own goal from Mallorca keeper Manolo Reina after Juanmi's shot salvaging a point for Betis after Brian Olivan had put Mallorca ahead.

There was late drama in Cadiz as a goal in the sixth minute of injury time from Alfonso Espino rescued a point for the home side after they had been outplayed by Levante for most of the game and led through Jose Luis Morales' 50th top-flight goal.

On Friday night, Carlos Soler got Valencia and new boss Pepe Bordalas off to a winning start with a 1-0 win at home to Bordalas' former club Getafe.

Valencia had defender Hugo Guillamon sent off in the second minute of the game, but Soler's first-half penalty was enough to give them a win in a bad-tempered match.