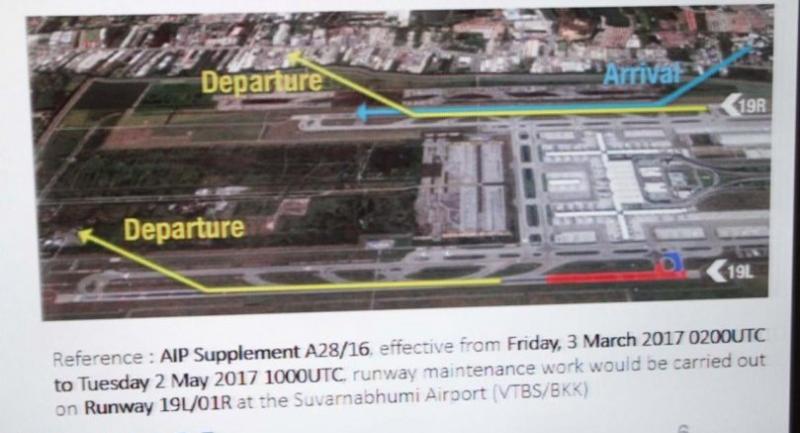 OFFICIALS at Suvarnabhumi Airport have drawn up a contingency plan to cope with possible flight delays if the runway and taxiway are closed during maintenance work over the next two months. The repair work is due to begin on Friday.

Officials have asked airlines to reserve more fuel to cover delays while waiting to land.

General manager Sirote Duangratana said the airport was preparing for work on the eastern part of the runway’s surface and taxiway B1.

Louis Moser, chairman of the Airline Operators Committee (AOC), said about 102 airlines would be affected while repairs are done on part of the runway and taxiway.

Referring to a meeting with the airlines, he said they needed to have fuel for an additional 60 to 90 minutes to ensure enough reserves while waiting for the signal to land from air traffic control.

Sirote said the airport would close an area 935 metres long at the northern end of the eastern runway, where concrete asphalt would be replaced by “modified asphalt”. Taxiway B1 will be surfaced with Portland cement.

However, Sirote said, the airport would still be open for planes taking off and landing as usual. There was still 2,750 metres of runway, which was enough for all types of craft, including long-range A380 Airbuses.

He said the airport would coordinate with U-Tapao International Airport, which would be a backup in the event of an emergency situation, if flights were unable to land at Suvarnabhumi.

Sirote said the airport had also set up a centre for monitor the progress of repairs to the runway and taxiway so the work is completed on schedule.

A passenger coordination and facilitation centre has also been set up in case there are flight delays.

Tinnagorn Choowong, executive vice president of Aeronautical Radio of Thailand, said the airport’s capacity could be cut from 68 flights an hour to 60 flights while the repairs are performed, adding that it was likely that the airport would be overloaded at times.

“Looking into the flight timetable, the airport can still serve a number of flights concurrently. But there might be flight delays from occasional traffic jams,” he said.